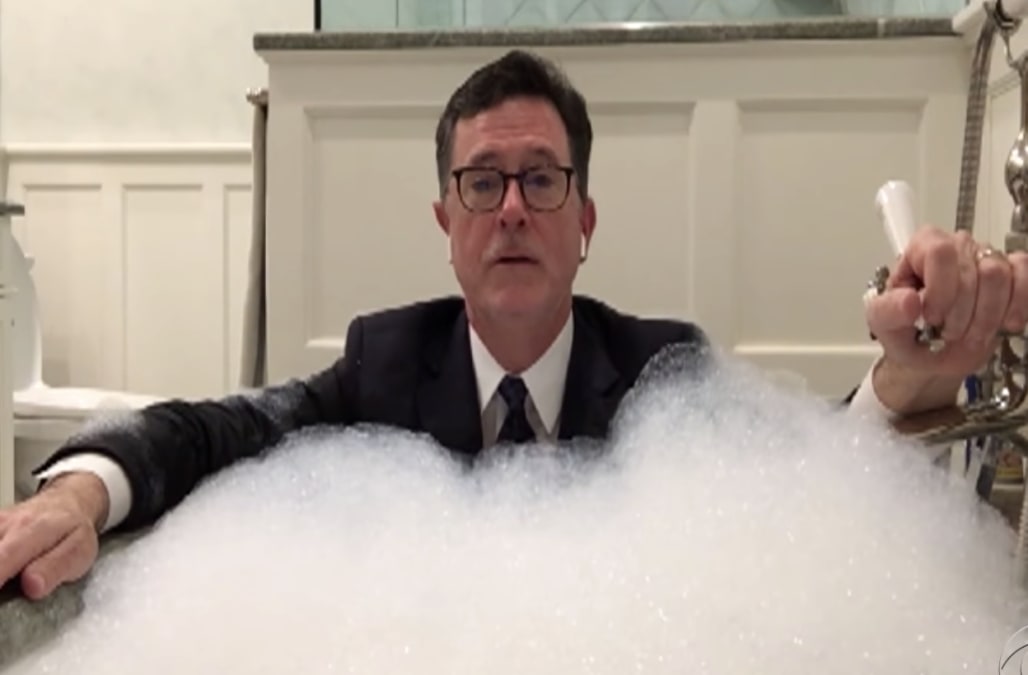 Fans of “The Late Show” who were expecting a week of re-runs were met with a far stranger surprise on Monday, thanks to a last-minute announcement from host Stephen Colbert.

Nearly every other late-night show — including “The Tonight Show Starring Jimmy Fallon,” “Jimmy Kimmel Live” and “The Daily Show With Trevor Noah” — are currently airing old episodes due to a two-week production suspension, and viewers likely assumed Colbert would follow suit.

But the comedian chose to do things a little differently. At 10:50 p.m. on Monday, less than an hour before his show airs, Colbert tweeted that he would in fact be recording a new episode — from a pretty unconventional location.

“If you’re curious what the LATE SHOW would be like with a bathtub but without guest, an audience, or band- that makes two of us. See you at 11:35 on CBS,” Colbert tweeted.

If you're curious what the LATE SHOW would be like with a bathtub but without guest, an audience, or band- that makes two of us. See you at 11:35 on CBS pic.twitter.com/0YC2rAXWT7

And as promised, the “Late Show” host appeared on live TV at 11:35 p.m., surrounded by bubbles. Sitting inside a large tub and wearing a full suit, Colbert began his monologue like he would any other night.

“Hi! Welcome to my bathroom,” he told viewers. “You’re watching a very special socialdistancing edition of ‘The Late Show.’ Or as I now call it, ‘The Lather Show With Scrubbin’ Colbert.’ My first guest tonight, as you can see, is Mr. Bubble, followed by a musical performance by the legendary duo Head & Shoulders.”

Colbert went on to explain that both he and his entire staff were working from their respective homes, before jumping into several minutes of wide-ranging political jokes. At the end of the monologue, he left a parting message from others who may be stuck at home.

“To paraphrase, in the immortal words of John F. Kennedy: Ask not what your country can do for you. Ask how many episodes of ‘Love Is Blind’ you watch in one sitting,” he said.

The unexpected monologue seemed to delight viewers, many of whom shared their praise on social media.

“I think I approve of this new #Colbert in-a-bathtub format. Actually most shows would benefit from the addition of vast amounts of foamy bubbles,” one Twitter user wrote.

“Thanks for coming back,” another said simply.

Others found the broadcast a little bit strange, although it didn’t seem to change whether or not they were watching.

“[Stephen Colbert] is doing @colbertlateshow from his home bathtub tonight so he can practice #SocialDistancing and it’s the weirdest late-night content I’ve ever seen,” one user wrote.

It’s unclear if Colbert will keep up his bathtub monologues, as a spokesperson for the show told the Washington Post that they couldn’t comment on the situation. However, the show will avoid taping live at its New York-based studio for at least the next two weeks, Vulture reported.

The post Stephen Colbert really just hosted ‘The Late Show’ from his bathtub appeared first on In The Know.

This $35 rain hat fully protects your hair in humidity, drizzle or downpour

This overnight face mask can give you the ultimate glow

7 expert and shopper-approved creams to keep your hands moisturized