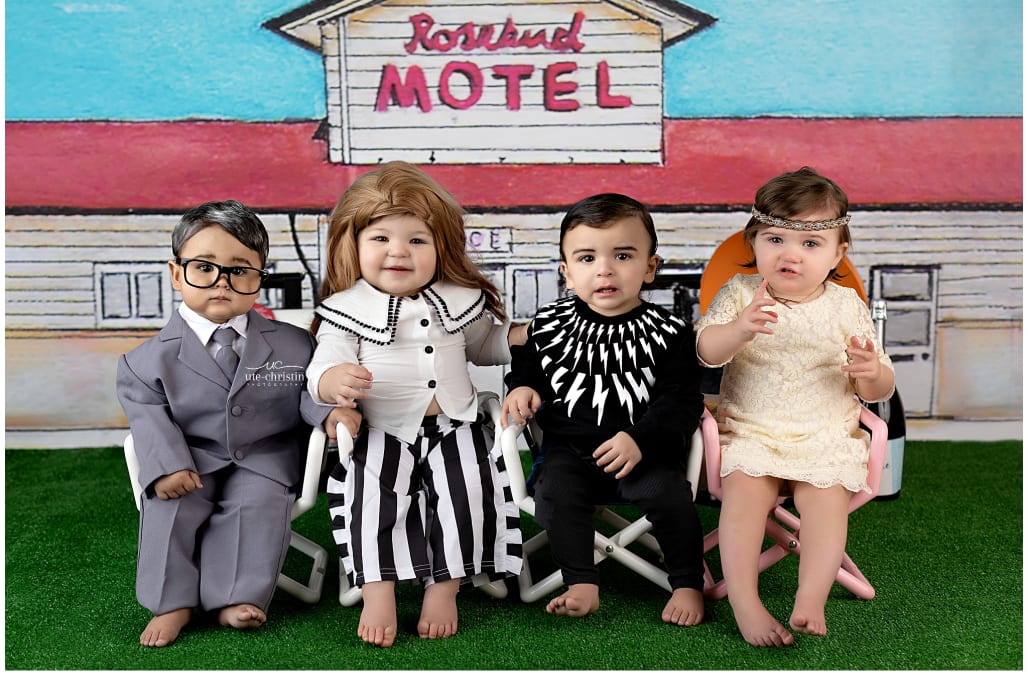 A photographer who happens to be a major “Schitt’s Creek” fan decided to have a few lucky bébés don Rose-esque attire and recreate scenes from the show to celebrate her studio’s 10th anniversary — and the result is simply the best.

“I think we hit the jackpot!” Cowan told In The Know over email. 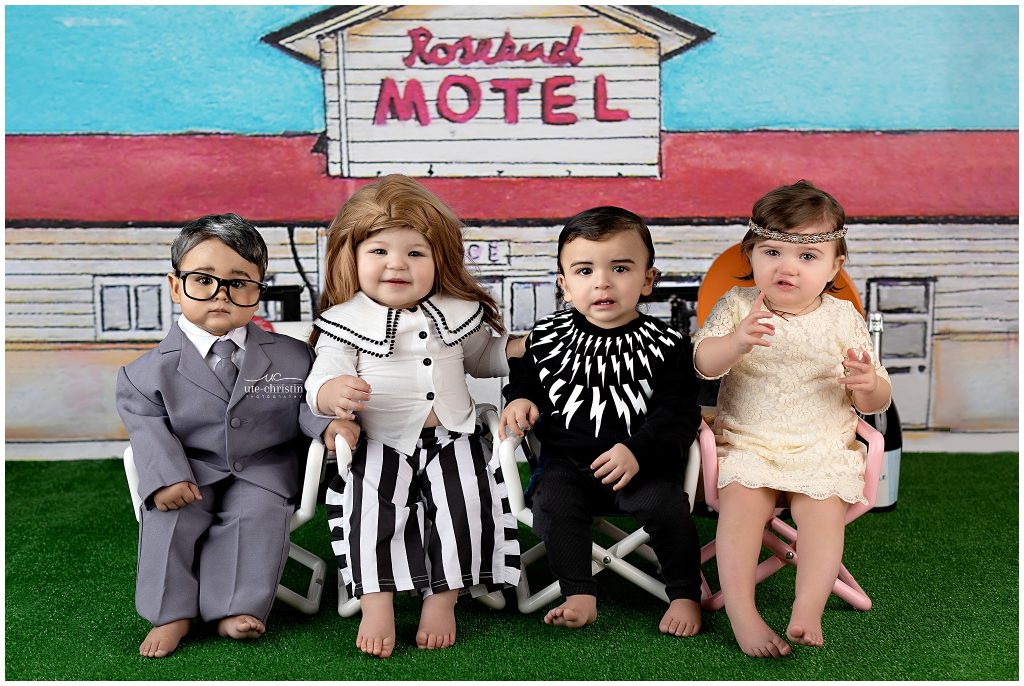 After finding their perfect Rose family, the studio set out to create the perfect backdrops for the occasion — namely, the Rosebud Motel and Rose Apothecary.

“We could not decide if we should take on the Motel backdrop or the store, so instead, I said, ‘Let’s do both!'” Cowan said. “It took a lot of planning and a lot of shopping to get this shoot just perfect!”

“I wanted to replicate their backyard picnics and bought some fake grill food and everything you need for a good bbq,” she added. “For the Rose Apothecary set up, I wanted a chic style keeping everything in (black and white.)” 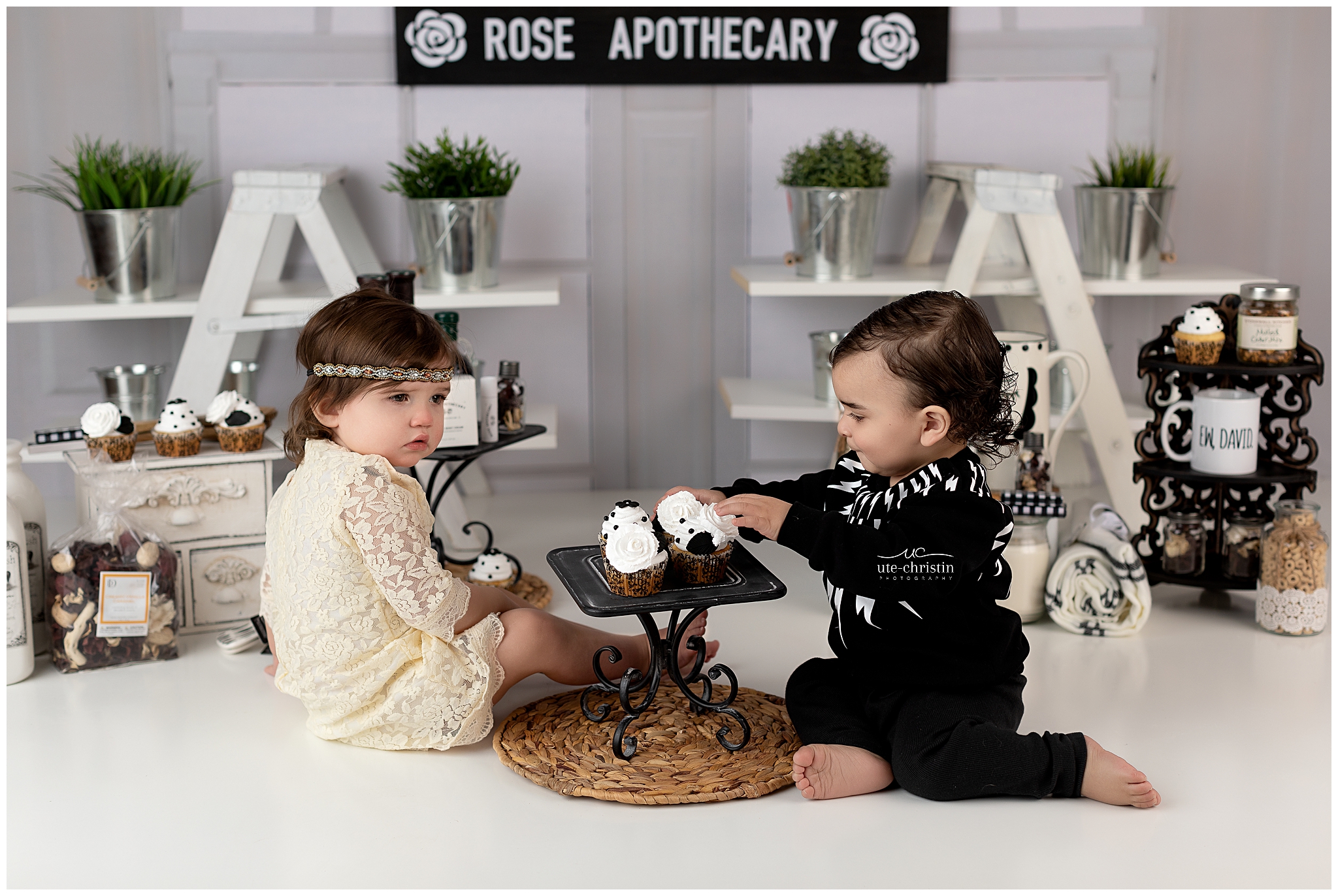 Cowan’s studio spared no attention to detail, even down to Catherina O’Hara’s bombastic hairstyles.

“For Moira’s hair, I knew I needed a wig so our talented hairdresser friend Johanna colored and styled it for us,” the photographer revealed. “I also ordered some Rose Apothecary products from Beekman 1802 to complete the setup.”

The studio even recruited a baker friend to recreate the infamous “Happy Day” cake, which was given to David and Alexis by their parents during a makeshift, joint celebration for his birthday and her graduation.

Most importantly, the now-internet-famous toddlers had a “riot” during the shoot. And oddly enough, the kids seemingly acted a lot like their on-screen counterparts.

“‘Moira” ( Harper, 13 months) was the most energetic,” Cowan said. “She was smiling at everyone and just had the best time. ‘Johnny’ (Liam, 12 months) was not fazed by anything. He was the calmest and just observing the chaos.”

“‘Alexis” (Evvi, 13 months) was a very emotional little one,” she added. “She had to take a few breaks throughout the shoot earning her some extra love from ‘brother David’ (Hudson, 10 months). He was just his handsome self. LOVED eating the cupcakes, I think he had about 5 in total.” 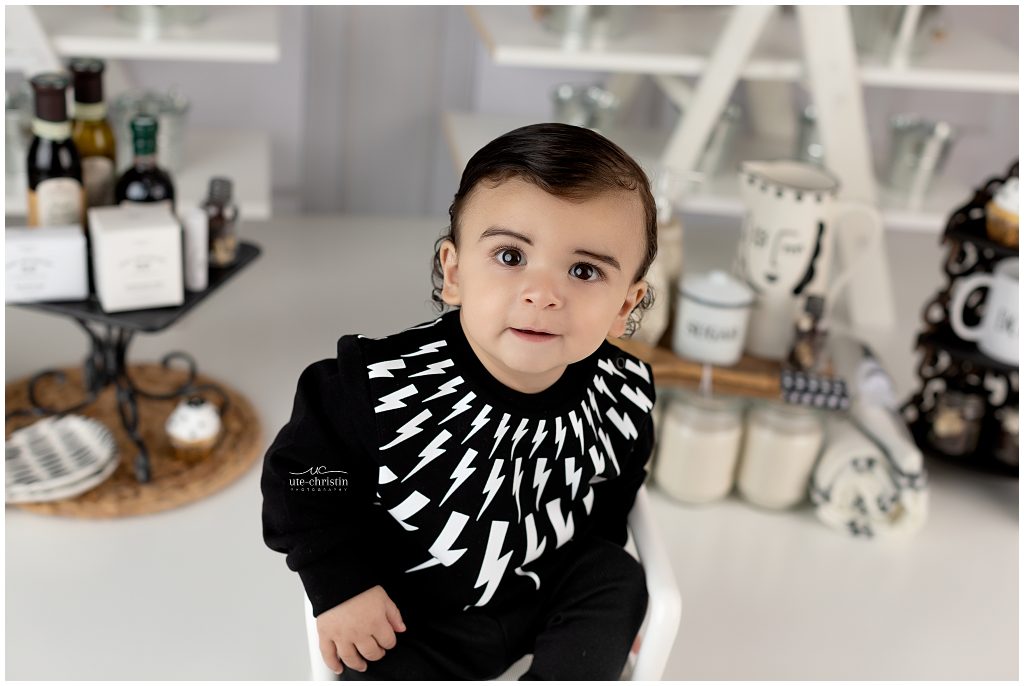 Cowan said the shoot was a blast and that she hopes it can serve as a delightful “homage” to the show, which she, her assistant and all the kids’ parents love so dearly, as it comes to an end at the end of its fifth season.

“We wanted to thank them for all the laughter and the warm fuzzy feelings in the last 5 years!” she said.

The post These bébés are dressed up as characters from “Schitt’s Creek” appeared first on In The Know.