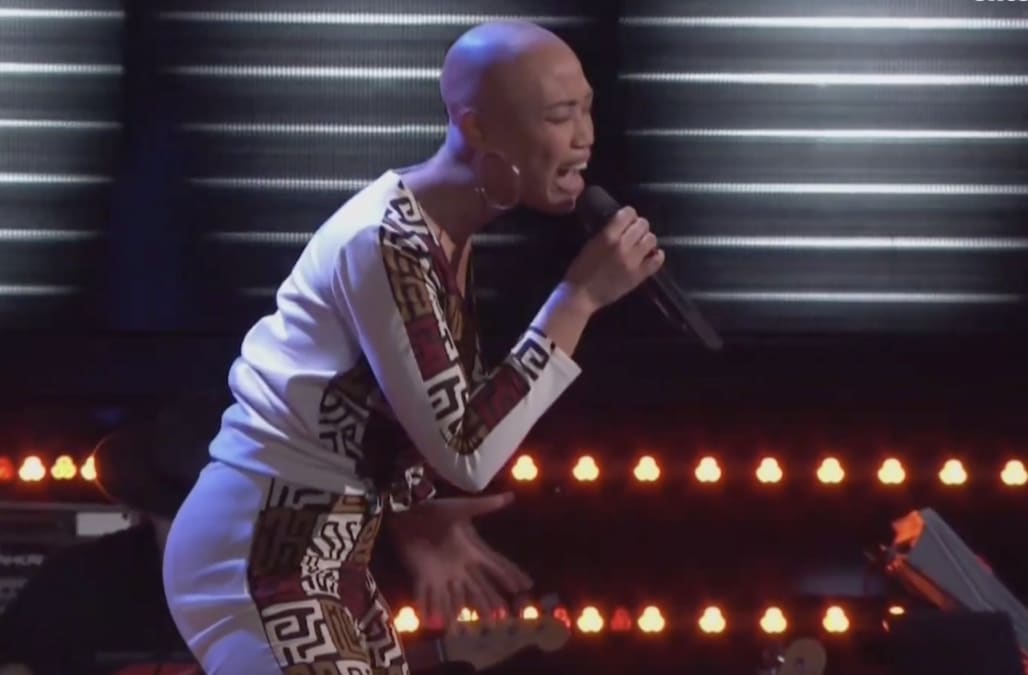 With the final Blind Auditions of The Voice Season 18 taking place Monday, the coaches’ teams were filling up fast, and John Legend was being especially picky. But this turned out to be a strategy that worked out perfectly for him, because by the time the final hopeful of the season 28-year-old Cedrice, slinked on to the stage, John was the only coach with an open spot on his team. And once his fellow coaches turned around and got a look at the bald-and-beautiful Cedrice (also known as “Ceyoncé”), in all her feline grace, they were crestfallen that they’d missed out on the contestant Kelly Clarkson declared “the hottest woman alive.”

Actually, the coaches didn’t turn around in the usual manner — they didn’t patiently wait for the torch singer’s white-hot “Fever” to come to an end. Kelly, her curiosity piqued by the audience’s roaring approval and John’s obvious giddiness, actually sneaked a peek from behind her red chair. And that’s when she screamed, “Oh my God,” amazed by the gorgeous chanteuse striking poses onstage. Blake Shelton and Nick Jonas then decided to check out what all the fuss was about. And while John’s rival coaches knew they wouldn’t have an opportunity to recruit Cedrice for themselves, they were still grinning broadly, clearly astounded by this drama-mama’s sultry performance.

“You are so sexy. My gosh, girl! I’m so mad! I would’ve pressed my button,” said Kelly.

“You are so classy. You have so much style. No one else looks like you. No one else sounds like you. I’ve been waiting to fill my team with someone special, and Cedrice, you are so special. I am so glad that I waited for you,” said John.

Cedrice developed alopecia, a condition that causes hair loss, at age 10, and she was bullied and teased all her life as a result. But now, it is her singularly fierce look. Her adoring boyfriend Matthew even said the first time he laid eyes on her, he thought, “Oh wow. All women should be bald!” But there is only one Cedrice. This dynamite lady is a star. And what better coach for the Hottest Woman Alive than People’s Sexiest Man Alive?

Cedrice ended the show, and stole the show, in style, but a few other contestant squeaked through during this last auditions episode. And they were:

This indie-rocker, who grew up in Japan, just quit lucrative his investment analyst job to pursue music. It was pretty obvious that his mom wasn’t thrilled with this decision, but unlike Barb on The Bachelor, Mrs. Iverson showed up to this show to support her son and hold her tongue. Micah had a pleasant tone, but his Kodaline cover lacked passion and dynamics. (Shannon Gibbons did a much better job with it on rival show American Idol, which aired the same night.) Hopefully Micah won’t regret his career choices later.

Who turned? Kelly, Blake, and Nick — a surprise, considering that the team spots were so limited by this point.

Result: Team Kelly. Apparently Nick trying to win over this self-described emo guy over by namedropping, um, Switchfoot and Copeland (and claiming the Jonas Brothers started off as an emo band???) didn’t work. Micah was equally unimpressed by Blake’s total lack of familiarity with Dashboard Confessional’s back catalog. So, he signed up to be Kelly’s only male contestant this season. “I hope he likes estrogen!” she laughed.

Brittney Allen: “Dancing on My Own”

Brittney’s cover of the Calum Scott version of the Robyn tearjerker showcased a lovely head voice and rich, masterful lower tone. But I fear she will get lost in the shuffle of flashier contestants. Blake didn’t turn, for instance, because he said he was “looking for someone to come out and blow the roof off this place.” And Brittney did not do that.

Who turned? Just John — but given his aforementioned choosiness, that was quite a vote of confidence.

This rural Alabamian delivered a solid, workmanlike cover of the Pat Green hit, but it was nothing special. We see a couple dudes like this every Voice season. Then again, a dude like this won last season (Jake Hoot), so Cam could go farther than a lot of other, more original contestants.

Who turned? Blake and Kelly, in what was the final country-coach showdown of the season.

Result: Team Blake. Kelly may have won with Jake in Season 17, but I guess Cam didn’t give a hoot. (Heh.)

This road-warrior music veteran promised to do the Elvis ballad “a little different than you’ve ever heard it before,” but I thought his 311-ish, reggae-lite version sucked all the pathos and passion out of it. This was too SNL’s “The Mellow Show” for my taste.

Who turned? Just Nick. I wonder if Gwen Stefani would have hit her button if she were still on the show?

This San Antonio-raised Mariah Carey superfan mixes Latin music with soul, and while her vocal range was hardly Mariah-esque, she did have some very pretty moments. Nick was so moved that he actually started crying, saying, “When I heard you sing… sorry, not to get emotional here, but I started thinking about how important it is for us to represent. My favorite music in the world is sung in all different languages. You are in a lane all of your own, and I would love to have a chance to help you grown as an artist and become all you can be, and hopefully bring some smiles to people’s faces like you did today.”

Who turned? All four coaches!

Result: Team Legend, which shocked me. I thought fellow Texan and Mariah fan Kelly, who has a penchant for Spanish-singing contestants and is even learning to speak Spanish on Duolingo, would be the lock, or that Nick would win Mandi over with his tearful speech. But Mandi “went with her gut” and picked the VEGOT-winner instead.

This Oklahoman teen worship leader, currently studying to be a music therapist for stroke patients, started off slow, but she built the momentum and drama and finished strong. Blake compared her to Bonnie Tyler and Kim Carnes, but the more gravelly parts of Kailey’s voice reminded me of another Voice coach, Miley Cyrus, or Team Blake Voice winner Chloe Kohanski.

Who turned? Just fellow Okie Blake — but both coach and contestant seemed perfectly thrilled with this arrangement.

Result: Team Blake. I’m sure he was 100 percent unfamiliar with the Alphaville ‘80s prom song, but Kailey seems open to going country, so she could be this year’s Cassadee Pope, who Season 3. “I would bet the farm on you winning his competition,” said Blake.

Gigi suffered with confidence issues after she developed polycystic ovary syndrome, which caused her to gain a large amount of weight as a teenager. Feeling more like herself after gastric bypass surgery, she came to The Voice ready to focus on her deferred dream. Her cover of the Adele cover of the Cure’s hit featured a few too many busy “Beyoncé runs,” but a little bit of expert coaching can fix that. “She’s got all the tools as a singer,” Kelly stated.

Who turned? Just Kelly — who buzzed in right away. “I’m so glad I didn’t have to fight John for you!” she exclaimed.

This adorable music preschool teacher had so much sprightly energy. His students must love him. Nick certainly loved him:ƒ He even hopped onstage to jam on the Jonas Brothers’ “Lovebug” with Kevin. That was a bad sign for John, but John still had hope, telling Kevin it would be rebellious and “revolutionary” to sign up with the coach he hadn’t dueted with.

Who turned? John and Nick.

Result: Team Nick, of course. But Kevin said he’d love to “go for a beer” with John. “I don’t even drink beer,” moaned a defeated John. But with Cedrice on his team, John will do just fine.