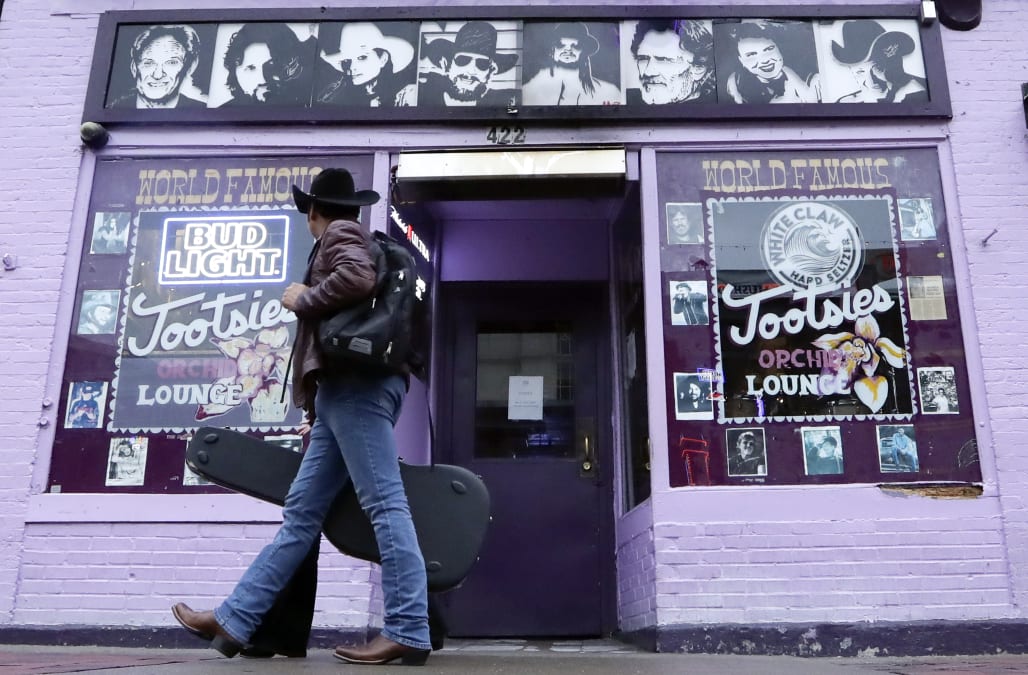 Despite edicts from the city of Nashville to shut down over coronavirus concerns, some of the tourist-filled bars along the city’s perpetually packed Lower Broadway are defying the local government’s and many citizens’ call to close, conducting honky-tonk business as usual.

Steve Smith, the owner of nightspots like the venerated Tootsie’s and the controversial Kid Rock’s Big Ass Honky Tonk Steakhouse, issued a statement Sunday night declaring that Mayor John Smith did not have the authority to order his businesses shuttered. And as of early Monday afternoon, clubs along Lower Broadway were still in full swing — and not just the ones owned by Smith — according to local news reports.

On Sunday night, Smith had issued a statement about plans to keep his bars running, saying in part: “We appreciate the efforts of Mayor Cooper to combat the COVID-19 virus, but unless there’s a statewide mandate that directs all bars and restaurants to be closed, the request made by Cooper is unconstitutional as he is targeting a select group of businesses.” He further said that “a Tootsie’s patron as immediate as last night mentioned having lived through the polio epidemic and didn’t recall such extreme measures being handed down in history.”

Concerned Nashvillians have been among those retweeting photos that have made news of  Nashville’s unremittingly packed nightspots go, well, viral.

On Sunday morning, Maren Morris retweeted a link to video of a Nashville bar that appeared at full capacity, writing, “While the rest of us are trying to be responsible in our homes and get this s— over with, THIS?! Broadway, you aren’t a hero for staying open.”

But at least one well-known musician took issue with her and everyone else calling for the bars to shut down. Joshua Hedley, a singer-songwriter signed to Jack White’s Third Man label, tweeted in response to Morris: “Some of us aren’t millionaires. Some of us have to work down there for tips and have to pay bills.”

On Sunday afternoon, prior to a meeting of Nashville’s Metro Board of Health, the mayor had released a statement saying, “In advance of that meeting, I am asking for specific, short-term action to be taken effective immediately,” starting with a request that “bars on Lower Broadway and throughout Davidson County … close their businesses until further notice.” He also asked for restaurants to cap their seatings at 50 percent of capacity and allow no more than 100 patrons.

It was soon after that that Smith issued his intent to disregard the order, further writing, “Tootsies Orchid Lounge, Rippy’s, Honky Tonk Central, Kid Rock’s Big Ass Honky Tonk & Steakhouse and The Diner will continue to remain open to serve the public until such statewide mandate is issued from the Governor of Tennessee.”

Later that night, the Metro Board of Health met, as planned, and declared a public health emergency, discussing steps that would make the mayor’s recommendations enforceable, possibly within 24-48 hours.

Monday afternoon, Smith’s attorney, Bryan Lewis, spoke with the press and vowed to pursue legal action. “We are in it for the fight,” Smith’s attorney Bryan Lewis told WTVF. “We will continue business until a legal authority tells us we have to padlock our doors and shut down.”

Smith is hardly an uncontroversial business owner in Nashville. The man who has been described as Kid Rock’s “best friend” had previously threatened to file a lawsuit against the city when Kid Rock was removed as grand marshal of a Christmas parade after swearing and making misogynistic comments about Joy Reid on a live “Fox & Friends” broadcast from his club. No suit was filed and, this past holiday season, Kid Rock served as grand marshal of a smaller parade in nearby Leipers Fork instead.

That incident occurred under a previous mayor. Smith seemed to have been on better terms with Mayor Smith, before this: The last entry in the Tootsie’s Twitter account, from three days ago, shows the bar entrepreneur presenting Smith with a $100,000 check for the city’s tornado relief efforts.

Beyond the expected mockery of the polio comparison, reactions from locals on Twitter to the defiance were predictably mixed, ranging from “Never go to Tootsies, Honky Tonk Central or Kid Rock’s BIg Ass bar in Nashville. They’d prefer to kill you or someone you love” to “I got the whole hood going to Tootsies tonight.”

According to the Tennessean, 52 coronavirus cases had been reported in Tennessee as of late Monday afternoon. Public schools have been closed in the city and surrounding counties have been closed down through at least April 3.