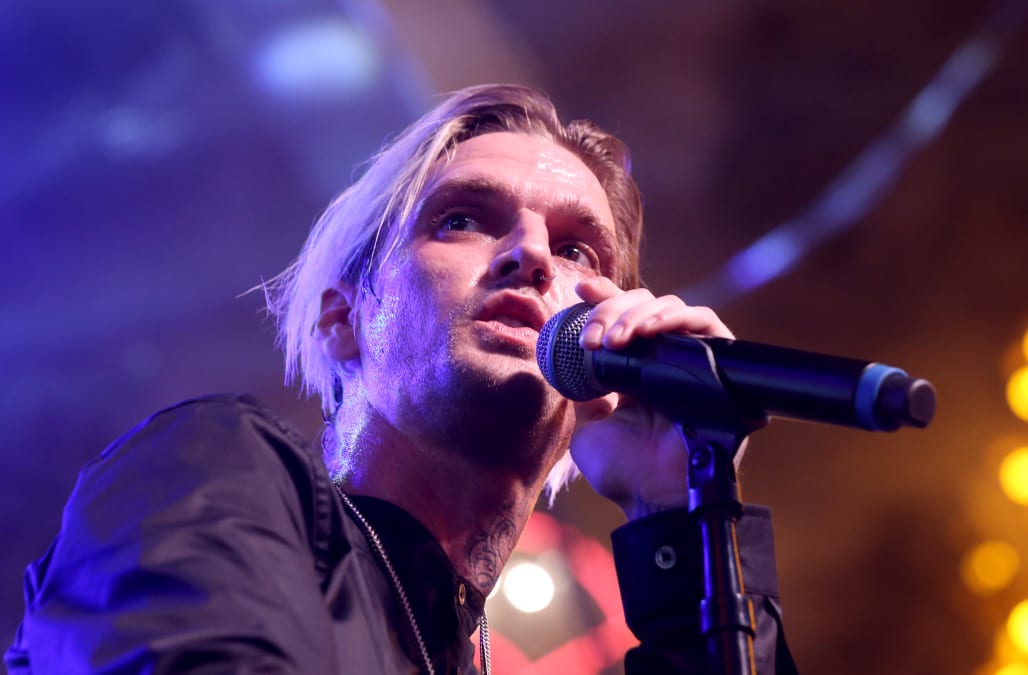 Aaron Carter is celebrating his lady with some fresh new body art.

The singer paid tribute to his girlfriend of three months, Melanie Martin, by having her first name tattooed in cursive script over his right eyebrow.

The tattoo was revealed when LA-based hair colorist Brandon Peach shared a pic of the artist to Instagram after working on his hair.

"Had so much fun hanging out with this guy and bringing him back his signature bright blonde Color," Peach captioned the pair of photos in the slideshow, noticeably not mentioning the new ink.

Martin herself also showed off the new tattoo in an video she posted to her Instagram story on Sunday. In the clip, she and Carter appear to be eating at a restaurant when Martin reaches up to brush Carter's hair back, revealing her name penned above his eye.

Carter and Martin made their relationship Instagram official back in January. The pair recently went on a vacation together to Amsterdam, which Martin documented on Instagram last week.

For his part, Carter hasn't shown off the tattoo to his own Instagram followers.

When Carter posted a pic from the hair coloring session, he shared a pic that only showed the left side of his face in profile, hiding the body art.

It's hard to tell when Carter got Martin's name tattooed on his face, but he doesn't appear to have the ink in Instagram photos snapped by both himself and Martin in late February.

Meanwhile, Carter seems to be in good spirits. The 32-year-old posted a snapshot of himself sitting on a dilapidated couch in the middle of an empty field on Saturday, while drinking a bottle of beer. The new tattoo is visible above his eye in the pic.

"So far 2020 has been great to me," Carter wrote. "Lots of cool things coming up looking forward to getting back to work after some much needed time off."

Carter spoke with ET -- alongside his mother, Jane Carter -- for the 100th episode celebration of WE tv’s Marriage Boot Camp last October. He opened up about the meaning behind the elaborate body art and explained how it depicted Medusa, the famous figure from ancient Greek mythology.

"Medusa is my protector. If you want to come at me with some negativity, my Medusa will stare you in the eye and turn you into stone," Aaron said, explaining the idea behind the new ink.

Check out the video below to hear more.