A ‘Voice’ audition so good, it breaks the coaches’ chairs 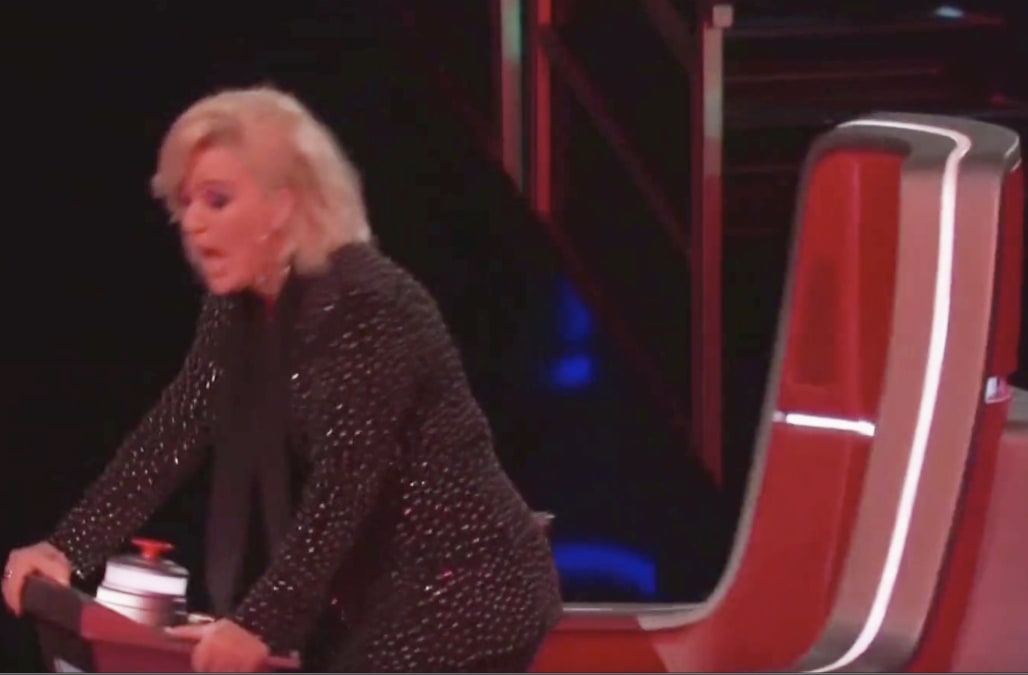 Some Voice auditions supposedly break the internet. I’m not sure if Samuel Wilco’s cover of Stevie Wonder’s “Lately” did exactly that on Monday, but it was apparently strong enough to break the show’s famous hydraulic red thrones.

After coaches Kelly Clarkson and Nick Jonas turned for Samuel and jumped to their feet, their chairs seeming short-circuited from the impact of their sheer excitement and abruptly pivoted backwards — while poor, teetering Kelly clung to the armrests for dear life. “Quit messing with me! I’m in heels!” she shouted, as a production assistant rushed to her aid.

Once the chairs’ hilarious malfunction was addressed, it was time for Kelly and Nick to go to battle over this 39-year-old Army veteran. While Samuel’s performance of the Stevie song was old-fashioned and restrained, he showcased a sublime, supple, and smooth tone, and both coaches were impressed.

I thought Kelly had this one in the bag when she revealed that “Lately” would be her audition song if she ever tried out for The Voice. (Fun fact: For her 2002 American Idol audition, which didn’t even air initially, Kelly sang Etta James’s “At Last,” followed by Madonna’s “Express Yourself.” Why didn’t she ever do “Lately” on that show?) But Sam’s a good dad, so he went with Nick, because his kids are JoBros fans. That was when Kelly really felt like she’d been “messed with.”

Samuel, who’s served his country since age 18 and has been deployed to Kuwait three times, is retiring from the Armed Forces next year and now realizes that music is his late-in-life calling. I’m not sure how far he can go on The Voice, but he definitely deserves this chance. Hopefully Nick will do right by Samuel, although I’m not sure why the most obvious coach choice, John Legend — who actually had Stevie Wonder perform at his wedding to Chrissy Teigen — didn’t turn around. Maybe John’s chair was malfunctioning as well?

These were the other successful Blind Auditions of Monday night:

This prodigy from a big musical family delivered a stunning piano rendition of the Kings of Leon ballad, taking some lovely liberties with the melody and tastefully choosing her moments. It was very Sarah McLachlan/Tori Amos/Alicia Keys, and very good. “She could be a real threat to the competition,” Nick predicted.

Who turned? Kelly and Nick… but, again, surprisingly not piano man John, who later admitted, “I’m kicking myself!”

Result: Team Nick. Kelly played the Brynn Cartelli card (the first contestant Kelly ever turned for was 15-year-old Brynn, who ended up winning Season 15). But new kid Nick noted that he too was a teen singer from a musical family, so he prevailed. Even Kelly later admitted, “That was a good pitch.”

Cam’s Fifty Shades of Grey theme was more like fifty shades of beige. While he delivered a solid and sophisticated vocal and had a couple nice moments, his performance overall lacked the fire, drama, and sex appeal of the Weeknd’s theatrical version. I don’t think he really earned it.

Who turned? John (a “heavy influence” for CammWess) and Blake Shelton.

Blake’s father’s favorite all-time artist was Cher, so I’m not surprised that Blake (eventually) turned around for this country-rocker. But a storytelling song like this needed more heart and chutzpah. Joie, a competitive bodybuilder, definitely possessed a muscular voice, but there was little emotion to her performance.

Who turned? Blake and Nick, both at the last minute — but Blake surprisingly blocked Nick. That’s how big a Cher fan Blake is, apparently!

This folksy Louisiana girl struggled with her lower register during this Heidi Newfield number, but she brought it on home in the final chorus. The key with Sara going forward will be song selection.

Who turned? Nick and Kelly. (Blake and John didn’t hit their buttons because they heard “pitch issues.” I heard them too.)

Result: Team Kelly. Nick tried to seal the deal by comparing Sara to Maren Morris and mentioning his undying affection for Shania Twain, but Kelly was clearly the better fit.

I would not have expected an REO Speedwagon power ballad to translate so well to bluegrassy country, but maybe that’s because this Nashville singer-songwriter doesn’t consider herself to be a strictly country artist. Samantha’s piercing but warm tone reminded me of Brandi Carilie or Natalie Maines, or even Season 3 Voice champion Cassadee Pope, and I was intrigued. This woman is the total package and, like Cassadee, seems to have everything it takes to win.

Who turned? Kelly, after hearing a “millisecond,” followed by Blake (whom Kelly blocked) and Nick.

Result: Team Kelly. Since Kelly is also an expert at genre-hopping, this pairing makes perfect sense.

I expected this street busker with a family-hardship sob story to be grittier and edgier, but instead he had an airy voice and a nervous, tentative demeanor. After that, I didn’t expect anyone to turn for him at all.

Who turned? Just Blake. John and Kelly considered hitting their buttons, but they said Jamal seemed “a little tight” and “not all in.” I think they were right to refrain.

Result: Team Blake. Blake seemed confident that he could help Jamal. “I think you’re going to see a lot of growth,” he assured.

This hip Hawaiian troubadour has the marquee-worthy name of a superstar, and, as John put it, “He’s already a star.” Even normally reticent host Carson Daly declared this one of the best auditions he’d seen in all 18 Voice seasons, and that wasn’t hyperbole. This was a truly special moment, as Thunderstorm exquisitely demonstrated artistry, supreme vocal control, total connectedness, and just the right balance of vulnerability and strength. This was indeed a perfect ‘storm.

Who turned? All four coaches, very quickly. John was shouting, “Sing that song! All right!” before Thunderstorm’s performance had even subsided. “You’re someone who could win this competition,” said Kelly. “Congratulations on being ridiculously talented,” said Blake.

Result: Team Legend. The congratulations ultimately went to John, whose unbridled enthusiasm won over this star contestant. “You have a chance you go far. I really believe in you,” John said.