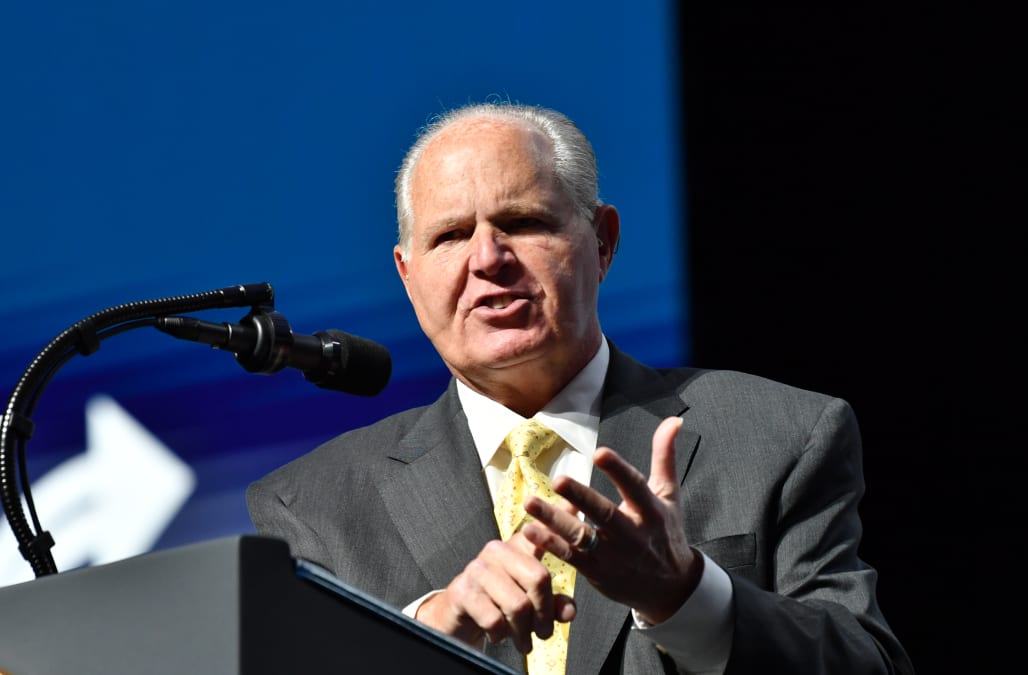 Right-wing radio host Rush Limbaugh claimed on his show Monday that the potentially lethal coronavirus afflicting several countries is nothing more than a “common cold” blown out of proportion by the media to take down President Donald Trump ― even as he also asserted it was a “bioweapon” created by China in a laboratory.

“It looks like the coronavirus is being weaponized as yet another element to bring down Donald Trump,” Limbaugh said at the start of his lengthy, misinformation-filled rant.

“Now, I want to tell you the truth about the coronavirus. ... I’m dead right on this. The coronavirus is the common cold, folks.”

Coronaviruses comprise a large family of many viruses, ranging in severity from the common cold to more severe illnesses such as Severe Acute Respiratory Syndrome (SARS), an epidemic that infected more than 8,000 people in 2003. A novel coronavirus, such as the current COVID-19 outbreak, is a new strain of the virus that has previously not been identified in humans, the World Health Organization clearly explains on its site.

Limbaugh, though, chose to go off on his own tangent.

“The drive-by media hype of this thing as a pandemic, as the Andromeda strain, as, ‘Oh, my God. If you get it, you’re dead...’ I think the survival rate is 98%,” he said. “Ninety-eight percent of people who get the coronavirus survive. It’s a respiratory system virus.”

The mortality rate is not yet known, according to WHO. The organization’s latest situation report confirms 79,331 infections globally and 2,618 deaths, both widely reported figures.

Citing a debunked conspiracy theory, Limbaugh then claimed the disease was probably a “laboratory experiment” conducted by Chinese officials that is “in the process of being weaponized.”

Experts have repeatedly said that this theory, pushed in conservative circles, has no scientific basis.

“There’s absolutely nothing in the genome sequence of this virus that indicates the virus was engineered,” Richard Ebright, a professor of chemical biology at Rutgers University, told The Washington Post. “The possibility this was a deliberately released bioweapon can be firmly excluded.”

Limbaugh insisted that the disease is being “weaponized by virtue of the media” in an “effort to bring down Trump,” doing so by scaring investors into cashing out of the stock market. (Global markets fell sharply on Monday after the novel coronavirus surged in countries outside of China, raising concerns about the threat the outbreak poses to the global economy).

To wrap up his monologue, Limbaugh declared the coverage of the outbreak represents an effort by the media to show that “Trump and capitalism are destroying America and destroying the world.”

He also worked in a reference to Sen. Bernie Sanders (I-Vt.) during his diatribe, saying the Democratic presidential candidate wants to transform the U.S. into a “mirror image of” the country in which the novel coronavirus was first detected in humans ― China.

“It didn’t come from an American lab,” Limbaugh said. “It didn’t escape from an American research lab. It hasn’t been spread by Americans. It starts out in a communist country. Its tentacles spread all across the world in numbers that are not big and not huge, but they’re being reported as just the opposite.”

Earlier this month, Limbaugh revealed that he had advanced lung cancer. He was awarded the Presidential Medal of Freedom by Trump during the president’s State of the Union address the following day.