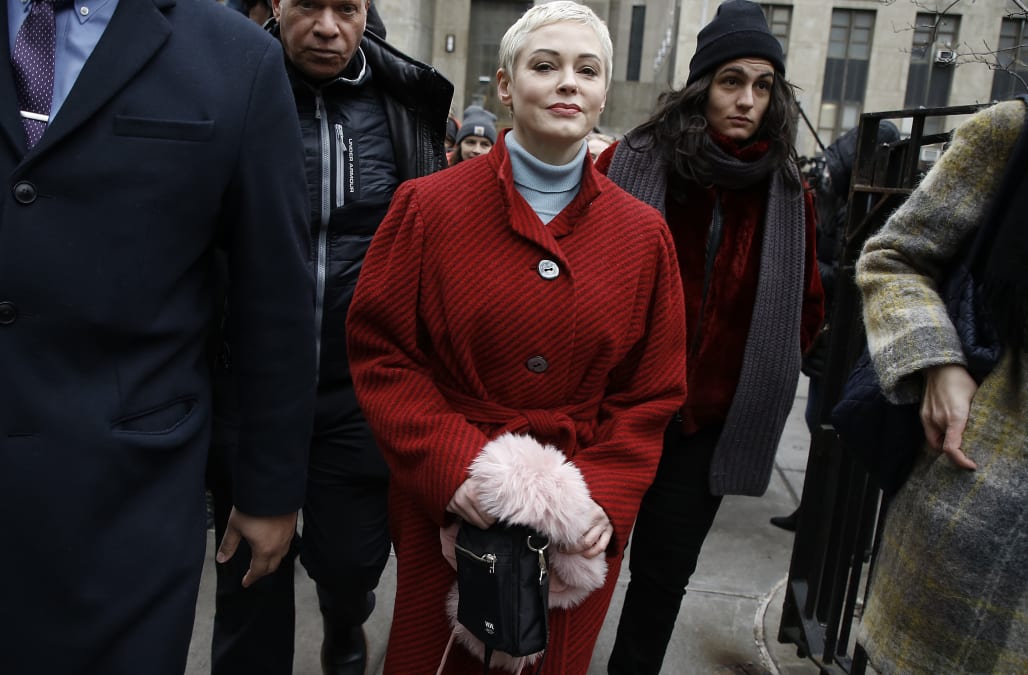 Although Harvey Weinstein is in custody after his rape conviction, Rose McGowan still worries he may seek retribution against her.

McGowan — a Weinstein silence breaker, who early on led the charge against the disgraced movie exec, whom she claims raped her in 1997 — spoke out about his conviction of third-degree rape (of accuser Jessica Mann) and first degree criminal sexual assault (of Mimi Haley) on Tuesday’s Good Morning Britain. She said Weinstein, who faces up to 29 years in prison, is “potentially one of the biggest serial rapists in history” and had a “full machine” of enablers. Because of that, she still fears him.

“He very much came after me, he and his giant machine of other monsters — enablers, people that he paid to do dastardly things,” McGowan said on the U.K. show. “Things that sound like they’re out of a spy novel, but they were my life.” (During the trial, there was testimony that Weinstein hired a private intelligence agency to spy on McGowan and other accusers to discredit them.)

McGowan continued, “The other night, I have to be honest, I was sitting at home and I was thinking I should do the laundry and then I thought, Oh, I wonder if he gets convicted if he’ll hire a hitman to kill me? Oh, I wonder what I want for dinner.

“These are just casual thoughts of my life and that’s what’s so wrong and sick,” she continued. “That’s why I fought so hard for this to stop. But more importantly, I fought for global cultural reset because this still happens. While we’re speaking, people are being raped all over the world and they’ll never have a voice in this. I wanted to come and be a voice for those who will never get a chance.”

McGowan admitted she thought Weinstein “was going to be exonerated,” saying, “I never really had hope... The last time I actually had hope was the moment before I was raped by him. After that it became survival and that it became this kind of battle in this huge war.” She called his conviction “an extraordinary moment” and “a huge victory for all of us who have ever been hurt.”

And the Charmed actress believes there are more victims out there who have yet to come forward. (Nearly 100 women have accused Weinstein of sexual harassment and/or sexual assault. He has denied all allegations of nonconsensual sex.)

“He could be potentially one of the biggest serial rapists in history because he had a full machine set up only to rape,” McGowan said. “Movies, that was his living, but there was a rape factory — that’s what the business was behind the scenes… It’s the kind of human-trafficking that goes on. It goes on in Hollywood and the rest of the world… It’s in high levels of society and low levels.”

Weinstein will be sentenced March 11 and faces up to 29 years in prison. However, even the maximum wouldn’t be enough for McGowan. (Weinstein was exonerated of the most serious charge, predatory sexual assault, which could have resulted in a life sentence,)

“I would rather he ceased to exist,” McGowan said. “I think the world would be better off. I am happy there is one less serial predator on the streets because I can’t tell you, people would not be safe if he was out.”

After his conviction was announced, McGowan was among his accusers to react to the news on social media.

While Weinstein is in custody prior to sentencing, he’s not yet in jail. After the verdict, he was handcuffed to be transported to Rikers Island, but was rerouted to Bellevue Hospital, which has a prison ward, to monitor his high blood pressure and heart palpitations.

In an interview on Tuesday, Weinstein’s attorney Donna Rotunno said he’s scared of her client dying in prison due to his many physical ailments.

“He's 68 years old,” Rotunno said. “Who knows how many years he could survive in there. Probably not that many.”

She said Weinstein, who recently had back surgery, isn’t allowed to use a walker in jail, so he’s using a wheelchair. “Think about how he is going to deteriorate,” she told the tabloid, adding, 'We're going to try to get him out on bond pending appeal or pending sentencing.'

More from Yahoo Celebrity:
'Bachelorette alum Chad Johnson arrested for domestic violence, robbery amid dispute with girlfriend
Harry Styles the victim of alleged robbery at knifepoint: Reports
Rosanna Arquette talks Harvey Weinstein: 'I believe there are some Oscar winners who are not able to come forward'