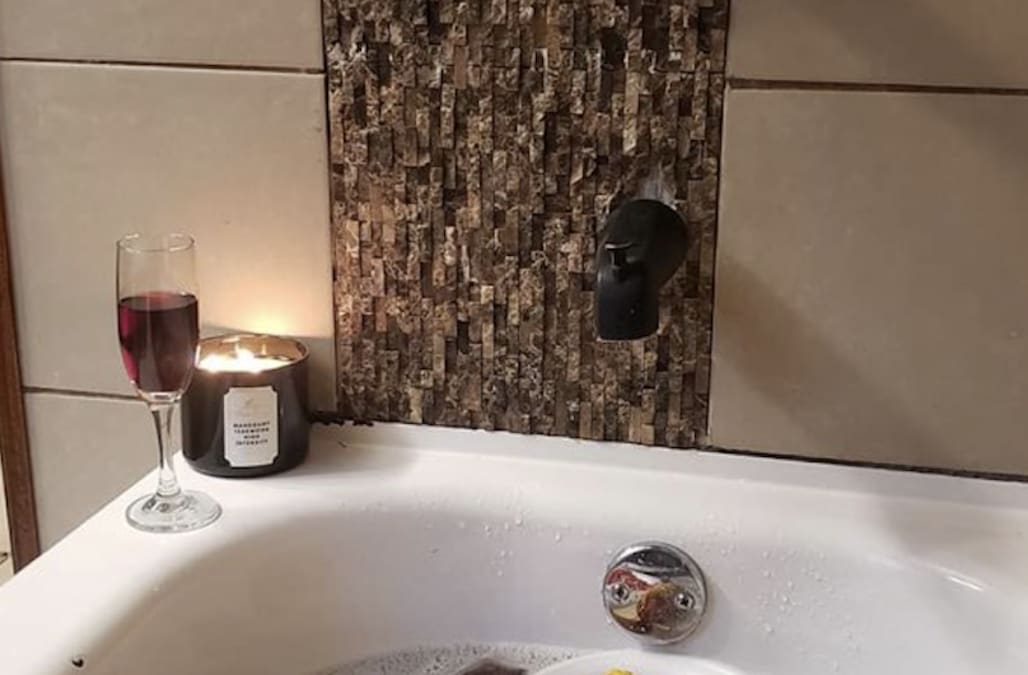 Grammy-winning singer Lil Nas X is sparking a wave of confusion among his fans after sharing an unusual bathroom photo on Twitter.

The image, posted on Feb. 23, shows the “Old Town Road” rapper inside a bubbly bathtub, seemingly relaxing with a glass of wine and a candle.

But it’s the other part of the photo that perplexed so many social media users: There are three styrofoam plates of food floating in the water above the 20-year-old’s legs.

“Much needed,” Lil Nas X captioned his photo, offering no explanation as to why — and how — he was eating several snacks that had been floating in his bathtub.

The image, which has now been retweeted nearly 14,000 times, is full of odd details that caught the eye of many Twitter users. For example, plenty of fans seemed stunned by the rapper’s hot dog, which, instead of a bun, appeared to be sitting on a slice of plain, white bread.

“What kind of human would use this bread for a hot dog,” one user wrote in response to the photo.

“Might want to delete this bro you can see your wiener in the reflection,” another joked, sharing a close-up of the hot dog.

might want to delete this bro you can see your wiener in the reflection pic.twitter.com/B9xdtbZJNY

Others were critical of the decision to eat inside the tub in general, as the entire meal — including a cookie and a plate full of potato chips — would be ruined instantly if they fell in the water.

“this is so filthy stop,” one user wrote.

Even Lil Nas X’s beverage choice came under fire. Some users were quick to point out that the drink, which looked like red wine, could get the 20-year-old in some trouble.

Stranger, more specific criticisms ranged from questions about the design of the bathtub to suggestions for better hot dog toppings. Still, some users were far more supportive, with many even sharing their own, alternative versions of the image.

Twitter users also compared Lil Nas X to a now-infamous Twitter user, who went viral for bathing inside a tub of Flamin’ Hot Cheetos. That user, a 20-year-old named Dakota Hamilton, later revealed her clip was made while helping a friend with an art project.

It’s unclear if there were any similar motivations behind Lil Nas X’s photo, or if really just wanted to snack and bathe at the same time.

More from In The Know:
This ‘scowling’ newborn might be the youngest meme ever
Woman plays violin through brain surgery in wild video
Amazon shoppers say these $23 leggings rival Lululemon