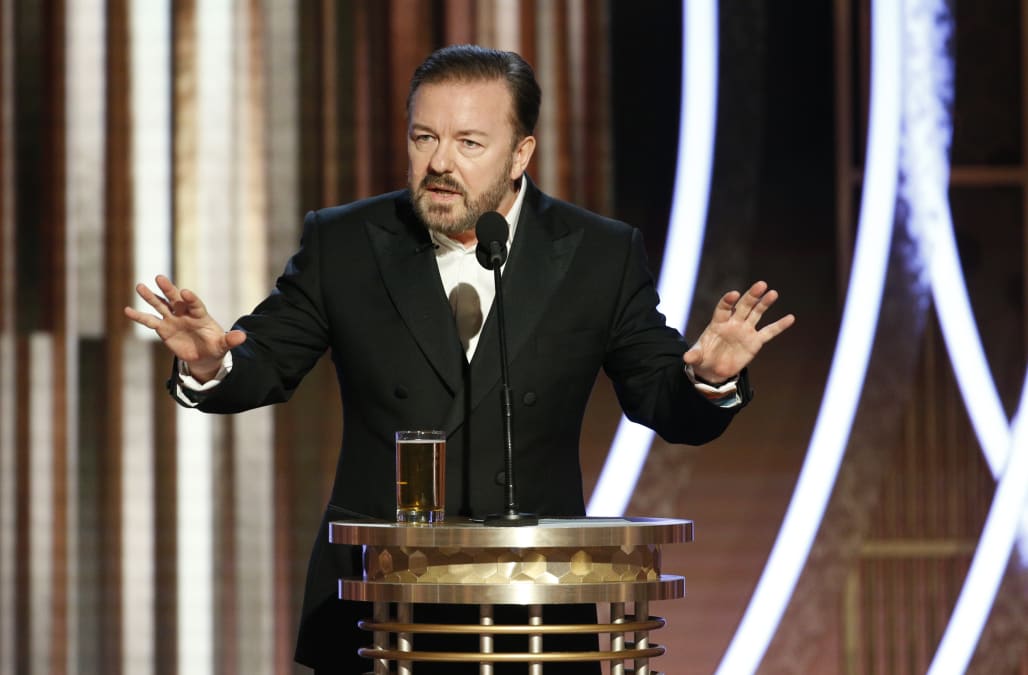 Count Ricky Gervais among those who thought Sunday’s Oscars were too political.

The comedian, who hosted the Golden Globe Awards for a record fifth time last month, on Monday shared his opinion that, while he has, “nothing against the most famous people in the world using their privileged, global platform to tell the world what they believe,” he’s warned them that their messages will backfire.

I have nothing against the most famous people in the world using their privileged, global platform to tell the world what they believe. I even agree with most of it. I just tried to warn them that when they lecture everyday, hard working people, it has the opposite effect. Peace.

And, as there often is at these things, there were several moments that referenced the current political climate.

Some of them were meant to be funny, like when presenter Steve Martin joked that the announcement of Best Picture would not be bungled, as it was in 2017: “They have guaranteed this will not happen this year because the Academy has switched to the new Iowa caucus app.”

When Josh Gad introduced Idina Menzel, who performed one of the night’s Oscar-nominated songs, “Into the Unknown,” from Frozen 2, he teased that climate change deniers call the movie, “Not Frozen 2.”

RELATED: Take a look at the best-dressed at the 2020 Oscars:

There were some serious moments, though, which is most likely what Gervais was talking about. Brad Pitt called out President Trump’s impeachment trial, as he accepted the Best Supporting Actor trophy. “They told me I have 45 seconds this year, which is 45 seconds more than the Senate gave John Bolton this week,” the Once Upon a Time in Hollywood star said.

Joaquin Phoenix, who won Best Actor for his performance in Joker, used his speech to mention inequality when it comes to race and gender, as well as animal rights. There were others.

Before the show had even started, Gervais tossed a couple of jokes that he would have used at the mic for the swankiest ceremony of awards season.

“I can’t wait to hear all your inspirational speeches about equality, and it’s great that the 3 hours you’re here tonight is the only time your badly paid migrant house staff will get some time off to sleep this week” https://t.co/fsFbdDkv6u

“It’s great to see such diversity in the room tonight. Rich sex pests of all shapes and sizes” https://t.co/fsFbdDkv6u

Zingers about class differences would have fit right in at the 2020 Oscars, where a movie all about them, Parasite, took him top honors.

Read more from Yahoo Entertainment:
Inside the Oscars 2020: Crowd erupts over Brad Pitt's jab at impeachment trial, 'Parasite' gets room on its feet and more
'Something's Gotta Give' co-stars Keanu Reeves and Diane Keaton reunite at the Oscars
Non-hosts Steve Martin and Chris Rock open 2020 Oscars with jaw-dropping vagina monologue