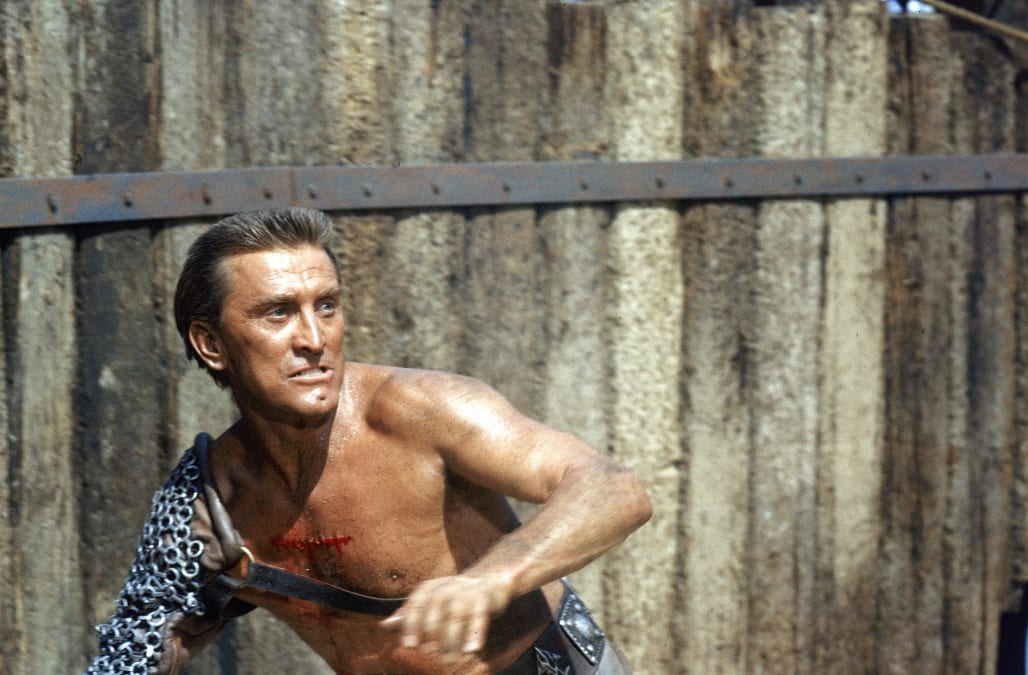 Legendary actor Kirk Douglas died on Wednesday at the age of 103.

His family confirmed his death with People.

“It is with tremendous sadness that my brothers and I announce that Kirk Douglas left us today at the age of 103,” his son, Michael Douglas, said in a statement. “To the world, he was a legend, an actor from the golden age of movies who lived well into his golden years, a humanitarian whose commitment to justice and the causes he believed in set a standard for all of us to aspire to.”

Over his six-decade career, Douglas starred in multiple classic films, including “Spartacus,” “Paths of Glory” and “20,000 Leagues Under the Sea.” The dynamic actor with the dimpled chin appeared in more than 80 movies, racking up three Academy Award nominations and one honorary Oscar.

He said it was the birth of his first son, actor-producer Michael Douglas, in 1944 that sent him to Hollywood.

“I never wanted to be a movie actor,” Kirk Douglas told Esquire in 2001. “I started out on the stage. The first time I was invited out here, I turned it down. Then Michael was born and I needed money, so I came. Sometimes, the thing that ties you down sets you free.”

Douglas was a tough guy both on and off the screen.

In his defining role, he played the title character Spartacus, an enslaved gladiator-turned-doomed rebel leader, in the 1960 movie directed by Stanley Kubrick. “Spartacus” received four Academy Awards and six nominations.

As executive producer of the film, Douglas hired the screenwriter Dalton Trumbo, then on Sen. Joseph McCarthy’s infamous “Hollywood blacklist.” The public crediting of Trumbo for his script is considered a key moment in the ending of the blacklist, and in later years, Douglas would repeatedly speak about the “guts” it took to hire him. (Like many stories out of Hollywood, the truth of the matter is a bit more complicated, and Trumbo’s family has long claimed that Douglas’ version exaggerated his own role.)

In real life, the actor proved to be just as defiant in the face of age and infirmity. He suffered a heart attack in 1986 and had a pacemaker for the rest of his life. In 1991, he was in a helicopter that crashed into a plane above a Ventura County, California, airport. Two people died in the crash and Douglas’ injuries, including a compressed spine, left him three inches shorter. A near-fatal stroke in 1996 caused severe speech impairment; with therapy, however, he regained the ability to speak.

At the age of 88, Douglas had a double knee replacement. A few years later, he broke his foot. But at age 94, he walked onstage at the 2011 Academy Awards and charmed the audience while presenting the award for Best Supporting Actress. At the age of 101, he appeared at the 2018 Golden Globes ceremony with his son Michael’s wife, the actress Catherine Zeta-Jones.

Born on Dec. 9, 1916, in Amsterdam, New York, he was named Issur Danielovitch, but went by the shorter Izzy Demsky throughout childhood. The only son of Jewish immigrants from Belarus, he grew up poor ― The Ragman’s Son, as he titled the first of his memoirs. His family spoke Yiddish. In his later decades, he would have a second bar mitzvah at age 83 and engage in weekly Torah study.

According to the actor, he held more than 40 different jobs over the course of his life. He studied acting at the American Academy of Dramatic Arts in New York and legally changed his name to Kirk Douglas following his first job in summer stock theater. He joined the U.S. Navy to fight in World War II.

Douglas married his first wife, actress Diana Dill, in 1943. They had two sons, Michael and Joel, before they divorced eight years later. In 1954, he married producer Anne Buydens, with whom he had two more sons, Peter and Eric (who died in 2004).

His storied film career began in 1946 with a role in “The Strange Love of Martha Ivers.” Lauren Bacall had suggested Douglas, her former acting academy classmate, to producer Hal B. Wallis. Within the next decade, Douglas would earn his three Academy Award nominations ― for Best Actor in “Champion” (1949), “The Bad and the Beautiful” (1952) and “Lust for Life” (1956). He won the Golden Globe for his portrayal of Vincent van Gogh in “Lust for Life.” He also received the Golden Globes’ Cecil B. DeMille Award for Lifetime Achievement in 1968 and the honorary Oscar for “50 years as a creative and moral force” in 1996.

Douglas starred alongside Burt Lancaster in seven movies, including “Gunfight at the O.K. Corral” (1957), “Seven Days in May” (1964) and “Tough Guys” (1987). The two had a complicated friendship. Douglas, who reportedly stood 5 feet, 9 inches tall, wore stacked shoes to boost his height in movies. Lancaster, who was over 6 feet tall, would steal the specialized footwear. They had a love-hate relationship until Lancaster’s death in 1994.

In more recent years, Douglas took up blogging, becoming MySpace’s “oldest celebrity blogger.” He had more than 4,000 friends on the social network. In 2012, he began writing for The Huffington Post and continued submitting articles into 2016. Douglas also wrote a dozen books, including the retrospective I Am Spartacus! in 2012.

Douglas persevered by carving his own path. Film critic Roger Ebert, who interviewed him in 1969, quoted the actor as saying:

I don’t need a critic to tell me I’m an actor. I make my own way. Nobody’s my boss. Nobody’s ever been my boss. Your only security is in your talent. I didn’t get into this business as a pretty boy. I’ve made good pictures, bad pictures. I’ve been a maverick. I’ve never been under contract, except for one year at Warner’s after “Champion” ― l’ve made my own way!

Among his many other accolades, the American Film Institute in 1999 named Douglas the 17th greatest American male screen legend. (Lancaster was 19th.)  He became a goodwill ambassador for the U.S. State Department in 1963 and received the Presidential Medal of Freedom in 1981 from President Jimmy Carter.

On his 97th birthday, Douglas published a HuffPost article titled “My Birthday Wishes.” An excerpt:

So I asked myself, what do I want for my birthday? There’s nothing I need, other than good health for my wife and my family.

Suddenly it occurred to me that I knew exactly what I wanted ― a better world for my grandchildren.

But have you ever tried to put 97 candles on a cake? You can’t. So I put 10 candles to represent the 10 decades of my life. Here are my birthday wishes:

Excuse me ― I have a lot of candles to blow out.

More from HuffPost US Entertainment:
Kirk Douglas, Hollywood Legend, Dead At 103
Jameela Jamil Comes Out As Queer Amid Backlash Over New Job As Voguing Show Host
Kristen Bell Gets Resourceful After Daughter Washes Her Hair With Vaseline