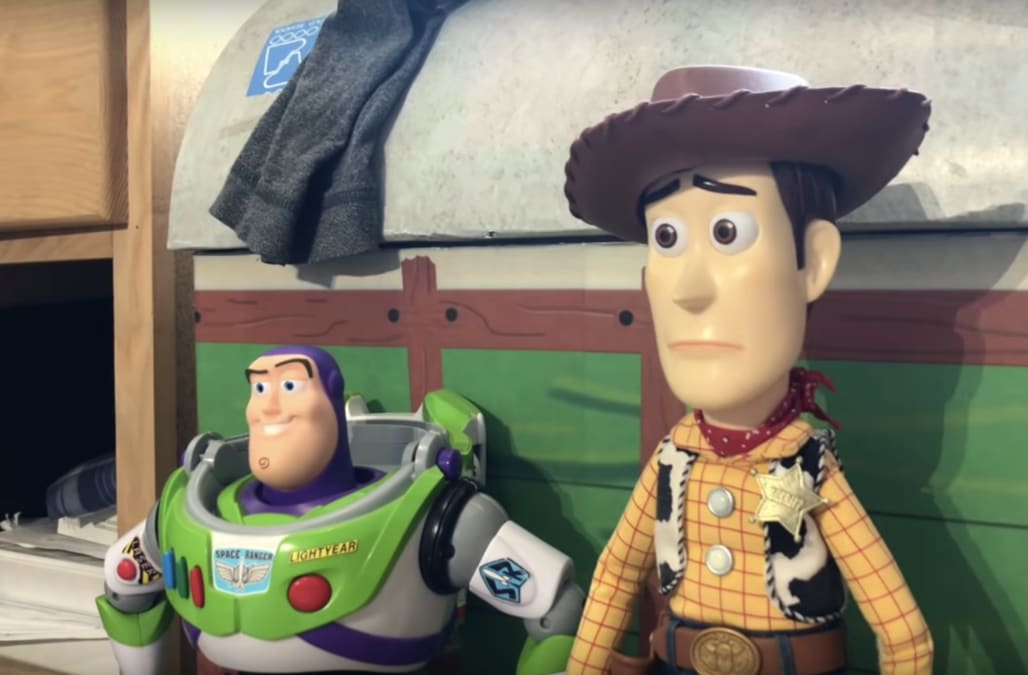 When Mason and Morgan McGrew first saw “Toy Story 3” in 2010, it immediately became their favorite movie.

"The biggest thing that makes "Toy Story 3" stand out is how authentic it feels," Morgan told In The Know. "It’s very deep — I know all the Pixar films are very emotional — but there are even moments in 'Toy Story 3' where it’s like, ‘Wow, they’re really going there.'"

Morgan was just 15 at the time, and Mason was only 12 — but the brothers were already fascinated by filmmaking. That’s when they got the idea that ended up dominating the next eight years of their lives.

“We kind of saw that we’d amassed a collection of “Toy Story” collectibles and we thought, ‘Oh, maybe we could start here and maybe recreate a few scenes,'” Morgan told In The Know.

But it didn’t stop at just a few scenes. The final project, which the brothers began in 2011, and released last month, is called "Toy Story 3 IRL [In Real Life]." It’s a shot-for-shot, full-length remake of the Pixar classic — made entirely with real toys, iPhone cameras and painstaking stop-motion animation.

And the video has been a massive success for the McGrews, who are now 23 and 21 years old. The brothers posted their film to YouTube on Jan. 25, and it received more than 1.7 million views in its first 10 days online.

But it wasn’t easy getting to this point. The McGrews told In The Know that the early days of "Toy Story 3 IRL" were spent finding toys and building sets, gathering the supplies that would ultimately turn into a feature-length film.

Ever since I was a little kid, #ToyStory toys have been a major part of my creative inspiration. They’ve always embodied sheer childlike wonder, happiness, and hope for me. I don’t play with toys anymore-but in a way I do. I created The Pixarist to continue “playing” with these toys through my passion, media creation. Taking photos/creating videos of Woody, Buzz, Forky, etc. brings me more joy than I can accurately describe. Apart from The Pixarist, 8 years ago, my brother and I decided to use Toy Story toys to recreate our favorite of the franchise, Toy Story 3. Bringing them to life through stop motion animation has been an incredible feat, but an amazing opportunity. I can’t wait for you to soon see what we’ve accomplished. I apologize for the long break. I buckled down hard and have spent every waking minute on this project. I plan on returning to The Pixarist in full later on. If you haven’t yet, please check out the incredible line of #ToyStory4 toys. The holidays are coming, and there’s something for every fan on your list. #WhatsYourToyStory

Then they started animating, honing their skills through countless hours of hyper-detailed animation (the brothers estimated that on average, they spent around four hours filming what would become two seconds of footage).

"The main challenge was, how do you make these real-life toys move around like they are real?" Mason told In The Know.

And life got in the way, too. Morgan eventually left for college, forcing Mason to take over with more of the filming. Later, when Mason started classes and Morgan graduated, the workload shifted the other way.

But the brothers got better as they got older, a fact that is clearly on display in the film’s two most crucial scenes — the action-packed, Wild West-themed intro and the famously heartbreaking "incinerator scene," which serves as the movie’s climax.

"We always wanted those two scenes to be the ones that looked the best throughout the whole thing, so we waited to do those last so we could build up all of our skills," Mason told In The Know.

Other scenes, naturally, were filmed when the brothers were younger and less experienced. The McGrews noted that despite reshooting several parts of the film, they also wanted to leave in some of their early work.

"We came to the point where it’s like, we didn’t want to redo every little thing," Morgan told In The Know. "Because then it kind of loses the idea that this was a process and there’s a story here of two creators who are growing along the way."

And growth is important for the creators, as both are pursuing careers in animation. Morgan, who recently graduated from college, is working as a freelance videographer while Mason, who graduates this upcoming December, is looking for an internship related to his interests.

The brothers told In The Know that while they don’t have any new projects planned — let alone any eight-year-long ones — they’d love to work together again in the future. For now, they’re just excited to finally give "Toy Story 3 IRL" to the people who supported them for so long.

"The best thing for me is that over this period of time we’ve had fans following us, and they’d comment over and over, 'When is it done? When is it done?'" Mason told In The Know. "So for me, it’s nice because now it’s theirs to view and I don’t have to feel guilty about not having that out there for everybody now. Everything’s good to go."

Lee, my brother and I spent 8 years on and off recreating Toy Story 3. It was an incredible experience getting to practice our skills with our favorite film. Thank you and the TS3 team for such a beautiful and poignant work of art. @leeunkrichhttps://t.co/p0p2dwxSN6