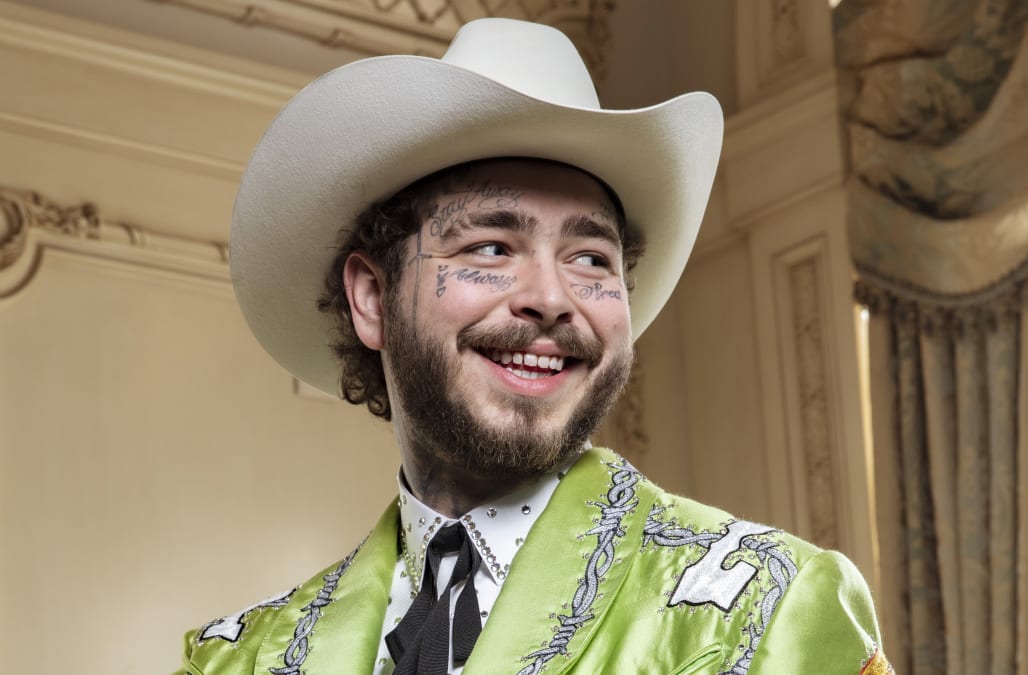 The last few months have been pretty major for Post Malone. The 24-year-old rapper released his latest album "Hollywood's Bleeding" in September, his hit single "Circles" made its way into the top five songs on the US Billboard Hot 100, he was nominated for two awards at this year's Grammys and a new trailer dropped for his debut movie that will be premiering this spring on Netflix.

Julia Webb of In The Know caught up with Post ahead of the Jan. 26th Grammys to hear all about his last few whirlwind months and his latest collaboration with iconic snack brand Doritos. Keep scrolling to read their full conversation.

ITK: Congratulations on your second year of Grammy nominations! This year, you were nominated for Best Record and Pop Dup/Group Performance for your song "Sunflower" with Swae Lee. As an artist who puts everything into your music, what does it mean to you to be recognized as a nominee?

Post Malone: It feels good. You know, I'm happy that people are listing to the music and I'm so proud of Swae, as well and Louis Bell and everybody that helped write the song and produce the song. We're just happy that everybody is being recognized because they deserve it a whole lot more than me and I'm just grateful to be apart of everything. I'm very excited, very happy for everybody and excited to be nominated again.

And this year you're also branching out from music with a part in the upcoming Netflix film Spenser Confidential starring Mark Wahlberg. What can you tell me about filming and being on set with a movie legend?

Mark Wahlberg is such a sweet guy. I’m so grateful that him and Pete Berg [the film's director] let me be a part of this movie. It was really cool because this is my first movie type deal where I had to do some actual acting. I was so nervous but they were so supportive and we went over the lines altogether.

It was just a cool experience to see how everything is done, you know the full camera crew, full audio crew, the way everything goes, having a body double and such. It was just a really cool and interesting experience that I would like to do again and see if I can get my acting chops up and be in more movies, and maybe do some more with Mark and Pete and just express myself.

You also have a new alter ego to play with this year thanks to your new collaboration with Doritos in honor of their new chip flavor, Flaming Hot Limón! Tell me about Post Limón.

So Doritos got out to me and they said, "we have this great idea for this new hot limón chip." And they said, "you’re Post Malone so let's turn you into Post Limón!" And I said that works out perfectly! So we do a bunch of cool, fun stuff and I think the commercial is hilarious and I think the concept is great. I'm really grateful that Doritos let me be a part of this and we had a great time. I can't wait for everyone to see it and try the chip!

allow me to introduce myself. #PostLimon @Doritos #ad

The commercial debuted during this year's Grammys and it was hysterical and over-the-top in the best way possible. Was it as fun to film as it seemed?

It was! I love doing funny different stuff like that. We had a lime green car, we had a whole bedazzled suit, we had a face tattoo and it was cool because I got my friends in the video. Everybody from [the Doritos] team was so sweet so the process was just incredible and so easy — we just had a great time.

It's no secret that you have a lot going and 2020 is already gearing up to be a massive year for you. What else can fans expect to see from you this year?

We're gonna go on this tour in February and then get off tour and keep working on some music and see if we can’t get another record out to the fans before the end of the year. And just keep chugging; do the best that we can every day and just try to keep kicking ass.

Want to see Post Malone on tour? Head to Ticketmaster to snag tickets!