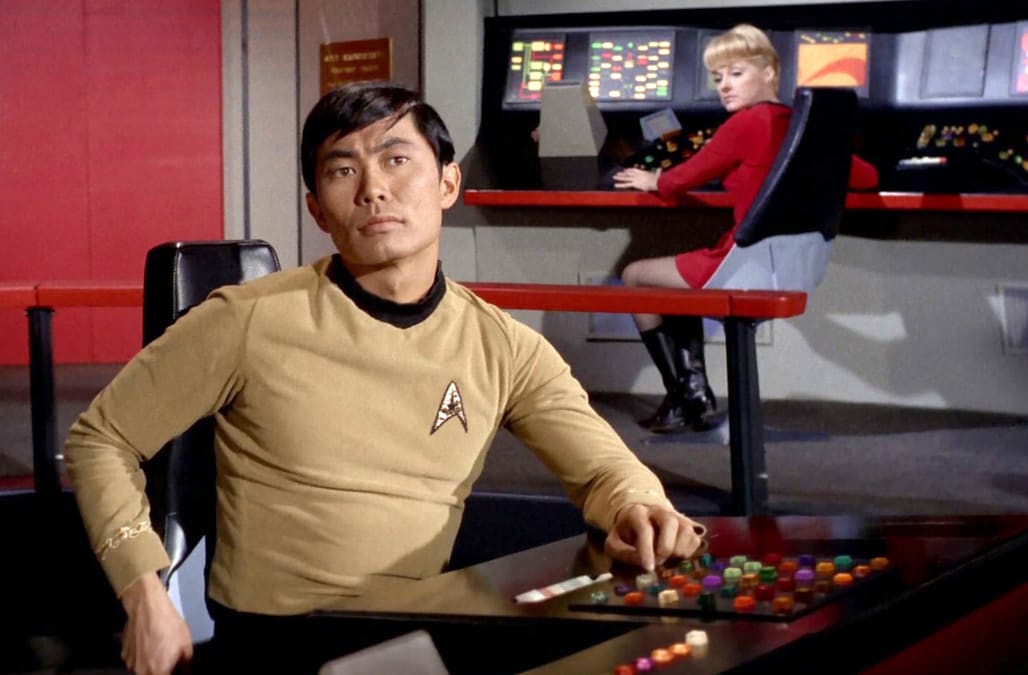 Actor George Takei is no fan of President Donald Trump, even less so after Trump on Friday unveiled a new logo for the newly created United States Space Force.

After Trump shared the design on Twitter, Takei, who played Sulu on the original Star Trek TV series in the ‘60s, pointed out its similarities to the one used by the sci-fi franchise’s Starfleet Command. “Ahem. We are expecting some royalties from this...,” Takei wrote.

Ahem. We are expecting some royalties from this... https://t.co/msYcJMlqjh

In one of several tweets on the subject, Takei declared, “There is nothing sacred anymore.”

The actor, who’s spoken out before about his political disagreements with Trump when Takei was a contestant on Celebrity Apprentice in 2012, was far from the only one who noticed similarities. The topic was one of the most talked about subjects on Twitter late in the day.

Trump just announced the new logo for the Space Force. The other is Star Trek Starfleet Command. pic.twitter.com/S7NeYdjR4C

Trekkies and others on social media were equal parts bewildered and infuriated.

It looks like you'll be hearing from Star Trek's lawyers.

But we have plenty of money to plagiarize the Star Trek logo & create Space Force to fight off the invading Klingons. 😑 pic.twitter.com/p4vDZk4YKB

I think this sums it up... pic.twitter.com/fndbyj2TU8

However, a few pointed out that the new logo has commonalities with an other earlier logo, one that was used by the Air Force.

For those excitedly tweeting that Trump stole the Star Trek logo!!!!, the patch on the left was the existing Air Force Command logo.

The same one I wore as a Lieutenant in 2005. pic.twitter.com/mYb60YioBP

Star Trek was already fresh on the minds of audiences, as the new show Star Trek: Picard, the eighth series in the franchise, debuted Jan. 23 on CBS All Access. The spinoff, which follows retired officer Jean-Luc Picard, played by Patrick Stewart, was renewed for a second season before the first episode had even aired.

The late Steve Jobs ran as hot and cold as Spock's half-human heart while burning with a passion for perfection. The Apple culture he left behind offers little room for the illogical.

This once-mighty smartphone empire has fallen into disrepair like the slums of Kronos, yet packs plenty of punch in the new Z10 handset. Still, the company's best days may be behind it.

Is there a tech titan with a bigger appetite than Cisco, which is well known for absorbing start-ups into its data networking empire? According to its investor relations website, this year alone, the company has already assimilated four companies.

The world's biggest garage sale is home to millions of greedy bargainers looking to make a deal. Or better yet, a steal. Watch out you don't get sniped.

In just nine years, the social network has grown to serve roughly one-seventh of the population of Planet Earth. You'd have to travel to another galaxy to find a species that multiplies faster.

Unruly, chaotic, but finding a way to grow despite varying and intermittent flaws in its products and business strategy. (Cough) Google Wave (cough). Not even an intoxicated Zefram Cochrane could keep these rebels from getting to warp.

Extremely powerful warmongers with a reputation for creating some of the universe's most powerful technology. To this day, Windows is like the cloaking device of the tech industry. Despite this, Microsoft's adversaries -- e.g., Apple -- have a  habit of beating the odds and defeating it.

Like the "Star Trek" universe, the business world offers abundant of opportunities to explore. Weigh in below with your nominees for the most Khan-like company on Earth.

The Monster in the Closet: Economic Horrors and Scary Movies

An Iron Throne for Your Golden Years: Our 'Game of Thrones' Stock Picks

16 Big Bubbles That Are Getting Ready To Burst