Hillary Clinton defends her 'real' marriage to Bill: 'I'm glad he stuck it out, too' 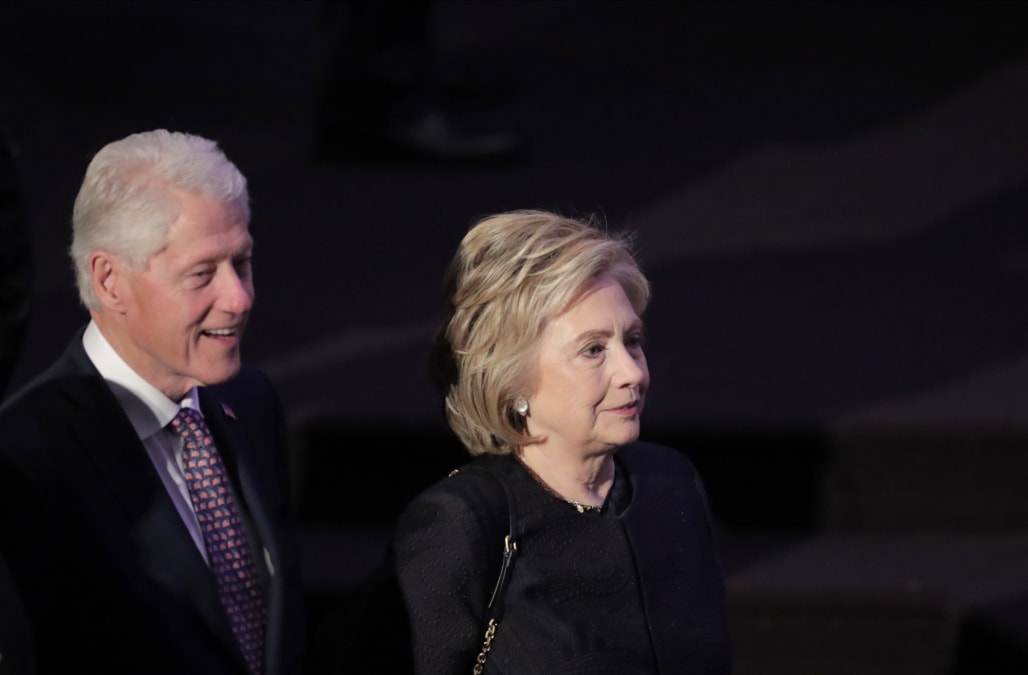 Hillary Clinton is back in the headlines at the start of this election year, but not because she's vying for the 2020 Democratic nomination. The former First Lady has kicked off a promotional tour for her upcoming documentary Hillary, which will debut at the Sundance Film Festival later this month. Clinton, 72, talked with the Hollywood Reporter about the four-part Hulu series in which she addresses old wounds — both political and personal.

"Once I decided that the film would be about more than a behind-the-scenes look at the campaign, I had to accept the fact it was going to be about my life," Clinton explained.

Of course, that would have to include her marriage to Bill Clinton and his affair as president with Monica Lewinsky. When filmmaker Nanette Burstein joined the project in 2018, she wanted to explore how Clinton had become one of the country's most admired and vilified people. That meant looking at all intimate aspects of Clinton's life.

"That was a major part of my life, which obviously played out in public. Look, I'm not going to sugarcoat it. It's painful, but it's also revelatory because we've always loved each other and had each other's backs," Clinton continued. "Have we had ups and downs like every married couple I know? Absolutely. And maybe this film helps people think about that, that love and relationships and marriage are often colored in grays and beiges. We all suffer ups and downs in our lives."

Related: Bill Clinton and Hillary Clinton through the years

Apparently, one of the elements of Clinton's marriage that Burnstein wanted to explore was whether her relationship with Bill is real or more of an arrangement. According to THR, Burnstein determined it was a love story.

"I hope it does [show that] because it's real and it's been around for a long time now — nearly 50 years, for heaven's sake," Clinton remarked. "I would love for that to be conveyed because I'd love to have the reality of my life story better aligned with the press and the public understanding of it. That would be a big step forward."

At one point in Hillary, Bill says to camera, "I was so grateful that she thought we still had enough to stick it out. God knows the burden she's paid for that." Clinton was asked what her reaction was when hearing that.

"First, I'm grateful that he understood that this was a really terrible time. I said [recently] in connection with a book that Chelsea and I wrote, The Book of Gutsy Women, when asked what was my gutsiest decision, I said, 'Well, personally, staying in my marriage,'" she recalled. "And that kind of sums it up. But I also think in every marriage there's not just one side."

Clinton laughed, "So, I could say the same for him, that I'm not always the easiest person to live with. I'm glad he stuck it out, too."

In Hillary, Clinton's campaign media consultant declares, "Women who judged Hillary for staying with Bill Clinton would have voted for Bill Clinton all over again if they had the chance. And kept saying so … And yet they took it out on Hillary."

Clinton told THR she was very aware of the judgment — from women in particular — that came her way for deciding to stay with Bill, but that she didn’t understand it.

"I wish I understood it, I really do. And look, I lived through that, where women were judging me and then a little conversation would lead to the fact that they had a similar issue or their sister did or their friend did, and there was so much anxiety and even fear wrapped up in it," Clinton explained. "But it was also true that, as we saw in survey after survey, he could, if he ran today, get re-elected. What is it about this double standard, both double standard in public and double standard in private? I think the movie does a good job of raising that issue. Trying to answer it conclusively is impossible, but at least we should be asking ourselves that question."

Clinton was also asked if the way she looks upon her husband's relationship with Lewinsky has changed in the #MeToo era.

"No," she replied. "I do think the culture has changed, and mostly for the good, but I also think you still have to look at every situation on its own facts and merits to make a decision."

Hillary premieres in its entirety March 6 on Hulu.

Hillary Clinton talks about her sexuality in Howard Stern interview:

More from Yahoo Celebrity:
Duane Chapman on his future: It's 'a lot harder now without Beth'
Meghan McCain reacts to op-ed calling her 'a problem' on 'The View'
Jillian Michaels regrets discussing Lizzo's weight: 'She didn't invite this'