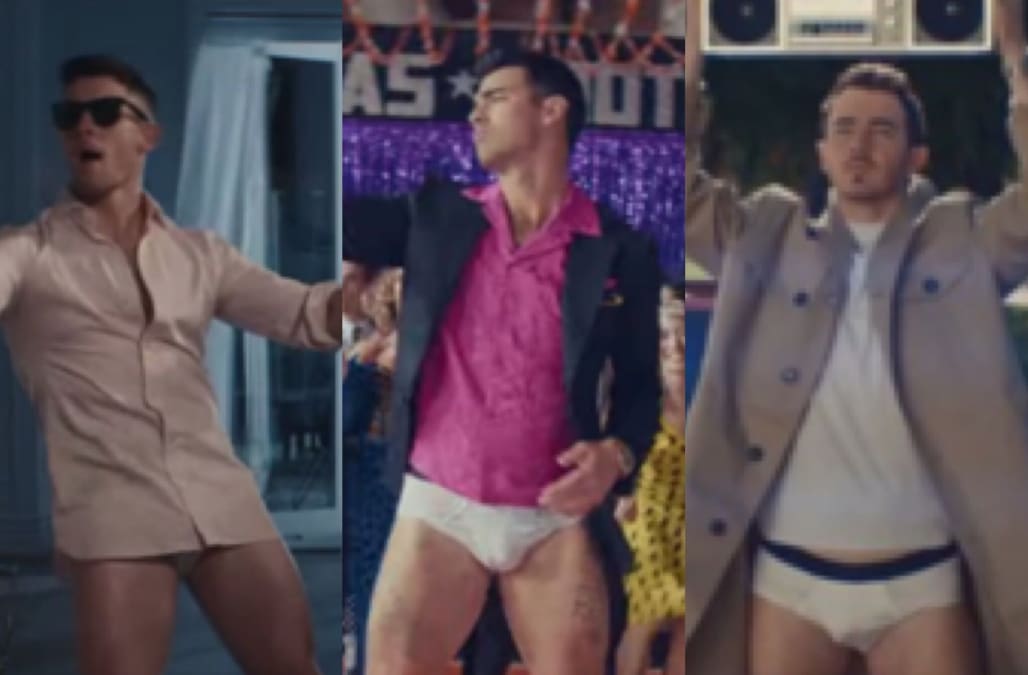 The Jonas Brothers debuted their new song "What A Man Gotta Do" at midnight on Thursday, along with a spoof-filled music video that fans can't get enough of.

The video starts with Nick channeling Tom Cruise in Risky Business, sliding across the floor in high socks and dancing in a button-down shirt, sunglasses and his underwear. His wife, Priyanka Chopra, shows up to gawk and laugh at him while lying on the living room couch.

Next up is Joe, who echoes John Travolta in Grease as he dances with wife Sophie Turner, who is dressed like the "innocent" version of Sandy from the classic musical film. At one point, another version of Turner rocking a black outfit and wig pushes her aside to join in on their moves.

It was then Kevin's turn: As his wife, Danielle, sleeps soundly with her dog, the oldest Jonas brother blasts music from outside her window a la John Cusack in Say Anything.

Naturally, fans went wild over the fact that the J-Sisters (that's what the Jonas Brothers' wives call themselves) were once again in one of their husbands' music videos. They all first appeared in the video for their comeback single "Sucker" last year.

Sophie as Sandy is EVERYTHING #WhatAManGottaDoVideopic.twitter.com/WVX8D1JXtg

There was also a playful, steamy moment between Nick and Priyanka that didn't go unnoticed by fans.

OMGGGGG NICK & PRIYANKA’s chemistry 🥵 they stole the show damnn it what a serve 🔥 #WhatAManGottaDoVideopic.twitter.com/nYtcNT914w

And, of course, the fact that Nick, Joe and Kevin all have moments dancing in their underwear during their new music video had fans freaking out, as well.

Not only did the @jonasbrothers say let’s release a great ass song but let’s also give our fans a heart attack.... #WhatAManGottaDoVideopic.twitter.com/8Ih6mT9MAC

The new @jonasbrothers music video is a gift to all mankind 🕺 #WhatAManGottaDoVideopic.twitter.com/AWqBxl4MP2

Watch the Jonas Brothers' music video for "What A Man Gotta Do" below: