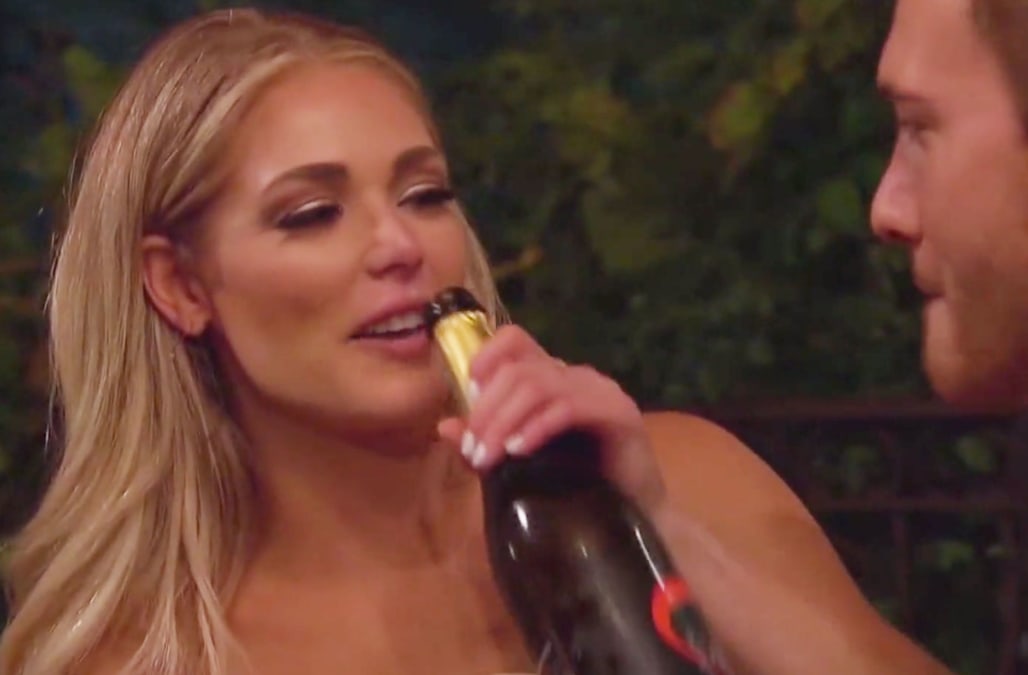 It was a dramatic second episode of The Bachelor, per usual, but one woman was not having the best night, when her plan to surprise Peter Weber with a bottle of champagne, which she claimed to have saved for over a year, totally fizzled out.

Earlier in the night, Kelsey Weier explained that she had received a bottle of champagne for her birthday and it had been on her counter for over a year. "I'm excited to share a bottle of champagne with him that I've been saving for a really special moment, and I wanted to open that the first night and it just unfortunately didn't happen, so I am excited for tonight," said Kelsey, who was shown setting up the champagne in a bucket with glasses by the fireplace, before returning to sit with a group of other ladies. Unfortunately for Kelsey, when she attempted to steal Peter for her moment, Mykenna Dorn snuck in at the last minute.

Kelsey began to feel annoyed over the fact that she wasn't getting alone time with Peter and, after striking out in her first attempt, things really began to bubble over when Hannah Ann popped Kelsey's bottle of champagne with Peter instead.

"That was my thing," Kelsey said through tears. "That was something that was special to me and that got taken from me. That was supposed to be my moment, and she took that from me."

Eventually, Kelsey went to confront Hannah Ann, who explained that she didn't know it was Kelsey's bottle.

Kelsey stated, "It's not okay what you did. I set this up. I brought this bottle from Des Moines. Don't try to play dumb." To make matters worse for Kelsey, when she finally got what she really wanted, time with Peter, well, this happened.

I’ve watched this about 15265 times. #TheBachelor#TheBachelorABCpic.twitter.com/HrbLPziAA5

After telling Peter she was down to drink the champagne straight from the bottle because she's "not a classy bitch all the time," the bottle of champagne exploded all over her face, which mortified Kelsey even further.

Bachelor Nation did not spare Kelsey on Twitter Monday, as they thought it was the funniest part of the entire episode.

Me when that champagne hit Kelsey’s face#TheBachelorABC#TheBachelorpic.twitter.com/VznXpKpB7l

The girls didn’t get a chance to share their embarrassing sex stories on the group date, so this girl gave a visual representation of hers #TheBachelorABC#TheBachelorpic.twitter.com/iY0myL8ZP5

“I’m not a classy bitch all the time” #thebachelor#thebachelorabcpic.twitter.com/ShVYK2NDDJ

Next time anyone asks me why I watch The Bachelor I’m just gonna reference this video #TheBachelorABCpic.twitter.com/HnMe6Wq2H5

Ladies, if this teaches you anything, never save your “special” champagne for a man. You drink that whole bottle by yourself. #thebachelor#TheBachelorABC

I BROUGHT THAT FROM DES MOINES #TheBachelorABC#TheBachelorpic.twitter.com/IWVuCMIjNG

The drama continued through the second half of the episode as the tension between Kelsey and Hannah Ann continued to build, and one thing's for sure - this is definitely just the beginning.

The Bachelor airs Mondays at 8 p.m. on ABC.