Lori Loughlin’s defense in college admissions scandal case leaks. Will she avoid prison after all? 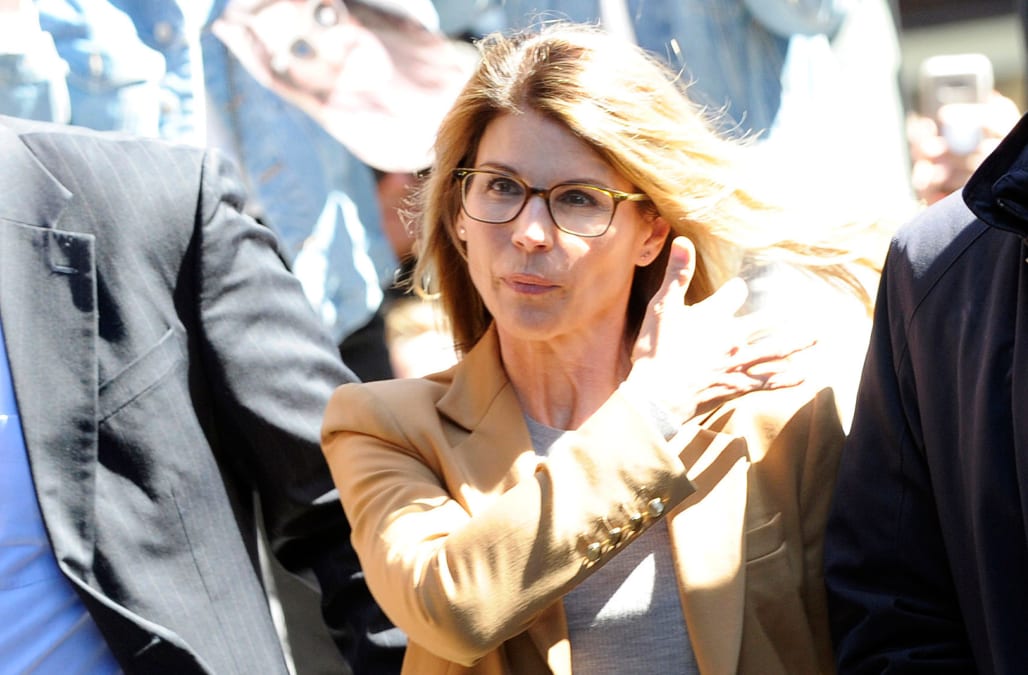 As Lori Loughlin’s legal team readies for two court appearances in her college admissions scandal case, new details about her defense have leaked.

Two times this week, TMZ reported new info about the Full House alum and her husband Mossimo Giannulli’s defense in the case, in which they stand accused of paying $500,000 in bribes, via disgraced college admissions expert William “Rick” Singer, to get their daughters into the University of Southern California. Yahoo Entertainment has consulted a legal expert to weigh in on the strategy — and the leaks.

The articles, which came off as favorable to the couple, made it clear the pair — who maintain their innocence — have no intention of taking a plea deal. As far as their defense, they “did NOT bribe the former Senior Associate Athletic Director Donna Heinel,” according to TMZ. While Giannulli “did indeed send Heinel a check for $50,000,” it “could not have been a bribe because the payee was USC,” not Heinel. And that money “was sent at the direction of [Singer]” as “USC invites donations like the ones Lori and Mossimo made to the school” as an “institutionalized form of admission for a price, and [was] in no way, shape or form bribery.”

Further, they’ll argue that while Singer made monthly payments of $20,000 to Heinel to get his clients’s kids in the so-called “side door” as fake athletic prospects, those payments began after the Giannulli girls were accepted. And the payments weren’t sent by Loughlin or Giannulli — they came from Singer. Also of note — and especially of note, if true — the couple will say they never submitted fake rowing photos of Olivia Jade and Isabella Giannulli, to USC to get them admitted as part of the crew team. (Though, arguably, not submitting them and not taking them are two different things.)

So is putting the blame on Singer and calling out USC for taking huge monetary donations a viable defense? It could be, says Los Angeles criminal defense attorney Silva L. Megerditchian of SLM Law, who is not a part of the defense team or working with Loughlin or Giannulli.

“The brilliance of the defense,” led by high-profile attorney Sean M. Berkowitz, a former director of the Department of Justice’s Enron Task Force, now of Latham & Watkins, LLP, “is that if you open the door, then it’s not just going to be Singer, it’s going to be the USC admissions policy,” Megerditchian says, referring to the fact that the wealthy have long been making legal financial donations to schools when their offspring is granted admission. “What the defense team is doing here is drawing the parallels. They’re saying, ‘If you’re going to look into my client for writing a check to USC, then you need to look at the big fish here.’ That potential can of worms has huge effects — not just on USC but every private school in the country.”

Because of that gray area, Loughlin and Giannulli’s attorneys could say of their clients, “We didn’t know that making donations to USC and Singer’s charity Key Worldwide Foundation was illegal. We wanted to make charitable donations to USC. We thought [it was legal] because everybody donates to the university — there are halls and whatnot. We had no idea it was wrong,” Megerditchian speculates.

After all, “A defense is simply a reasonable explanation for what could have occurred,” Megerditchian reminds, “There is no doubt that a huge donation was made, but if this can be seen as a just a simple donation to a university to help them along, then that is a huge defense to both of them.”

And if the fake photos of the Giannulli sisters were never officially submitted to USC, that also bolsters the defense.

“All of a sudden something we thought we knew months ago — the rowing photo — may not be true,” Megerditchian says of getting the first real glimpse of the defense.

While Louglin and Giannulli’s defense is seemingly solidifying, Singer is a huge wildcard in all of this.

“We know he’s cooperating with the government. We know that he’s going to get sentencing breaks because of the level of cooperation he gives,” Megerditchian reminds. “Will he say, ‘Loughlin and Giannulli absolutely did this knowingly?’ Will he he say, ‘This is something USC knowingly gave its blessing on?’ He is the one element of this case that is the most important and we just don’t know how big his influence is when it comes to really blowing this out of the bag when it comes to information.”

If it is determined that Loughlin and Giannulli — who face up to 50 years in prison each — did this knowingly, another thing TMZ says they will argue in defense is that what they did was ultimately a “victimless crime,” something we heard in Felicity Huffman’s case.

“It is victimless in that no one was hurt and nobody was killed,” Megerditchian explains. “Yes, by getting [their daughters] into USC, [two other applicants] who were probably more deserving were left out at USC. But on the flip side — 45 years as a punishment? We have very dangerous people who do substantially less time than what Loughlin and Giannulli face.”

Would prosecutors ever be swayed by seeing hints of this defense and want to change course by making a deal or reducing charges? That’s always possible too.

“If they think their case is beginning to fracture, absolutely they will try to settle this case in a way that would avoid a costly and days long trial,” Megerditchian says. “Look, the federal prosecutors also don’t want bad press. They also don’t want public apathy against them too. They want to do the right thing. Honestly, I believe their intention is to make sure that if a crime was committed, the person is punished and if it wasn’t, they won’t be. If this a viable and real defense, absolutely prosecutors will call them to the table and say, ‘Let’s talk about this.’”

Loughin’s been tight-lipped since her arrest last year — ya know, everything can and will be used against her — and reportedly didn’t hire a crisis PR expert. So these reported defense strategy leaks are an interesting play because they’re essentially tipping their hand to prosecutors.

“The philosophy when I tackle cases is keep everything private and shut down,” says Megerditchian. “I don’t like leaking material. I don’t like leaking my defense. I believe that it’s really important to leak as little as possible because your defense is necessary in trial and you don’t want to give prosecutors a heads up. It gives them a lot of time to prepare and come up with counter arguments.”

That said, “This is a really different case,” she says of the high-profile scandal, which saw nearly 50 other parents, coaches, exam proctors and admissions charged. “It’s safe to say there is no public empathy for either of these people.” So if the leak is coming from their legal team, it could be to “counter the unbelievable hatred and animosity this couple — and their daughters — are getting... Again, her attorney is a huge player. A huge defense counsel. He’s not going to make these decisions lightly.”

And the leak could be coming from a different source — for example, the family themselves or their publicity team.

“The leak certainly could be from within the family,” Megerditchian says. “Could they want to develop public sympathy for themselves? Anything is possible. But I will tell you if it was my case and the leak is not coming from me, I would be extremely upset and tell them to stop leaking.”

But getting their defense out there hasn’t exactly been terrible news for Team Loughlin.

“I’m not sure how powerful a tool it’s going to be in the court room, but when it comes to changing the narrative [in the public], it’s definitely doing what it’s supposed to do,” she says. “Using the news to your benefit can really be huge — you just have to be careful about how you do it.

More from Yahoo News:
As presidential candidates spend big on advertising, only a few invest in Snapchat
New Yahoo News/YouGov poll shows Americans view Obama as 'more effective' than Trump on Iran
Pompeo faces questions about the 'imminent threat' that led to the strike on Iran's Soleimani