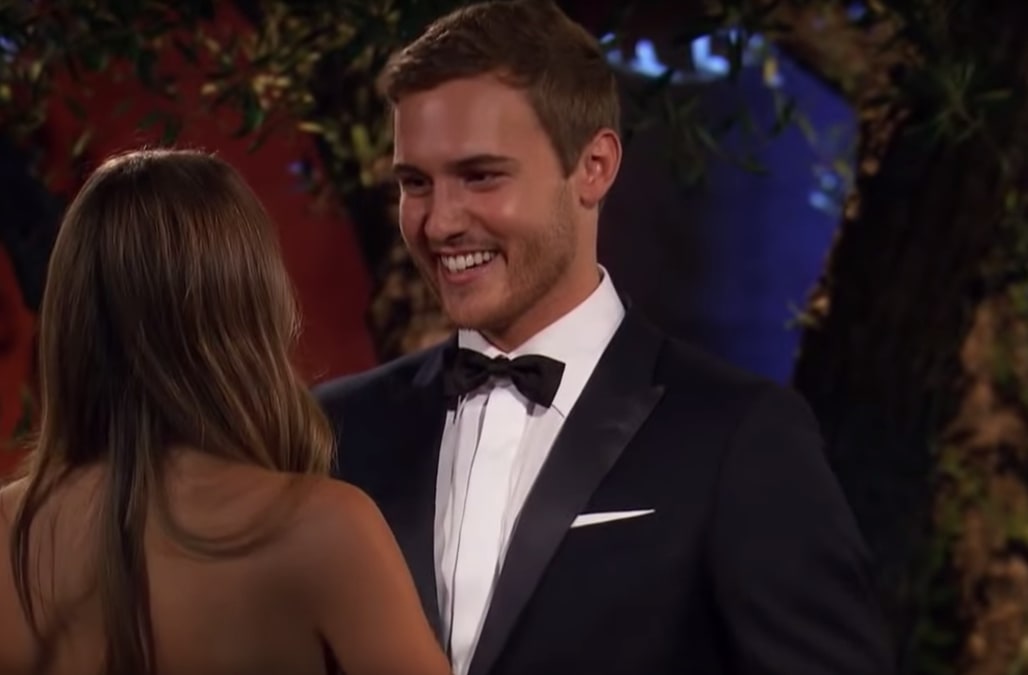 Peter Weber, a.k.a. Pilot Peter, a.k.a. sex in a windmill not once, not twice, but four times Peter, is the star of Season 24 of The Bachelor, which premiered Monday night on ABC.

As a reminder, Weber came in third during Hannah Brown's season of The Bachelorette last summer, after Brown chose Jed Wyatt, but ultimately broke up with Wyatt after learning he had a girlfriend back home. Weber was always a fan favorite and, relatively, drama-free, which is why he was selected as the new Bachelor.

After meeting the 30 women vying for Weber’s heart this season, Brown pulled up in the final limo and jaws dropped. Weber, as well as the ladies, and viewers for that matter, were freaking out, when the former Bachelorette, and Weber's ex-girlfriend, showed up and crashed the party. Fortunately for the threatened ladies, Brown was only there to return Weber's wings to him, which he gifted to her on the first night of her season. "When I heard that you were gonna be the Bachelor, I had mixed emotions. But when I stood where you are, you wanted to find your copilot, and you gave me something. And I want you to find that person. And so, I brought these back for you," Brown told Weber.

After Brown left, Weber assured the ladies, saying, "If anything, this is just– kind of seeing her tonight is just giving me even more hope, you know, moving forward with all you beautiful ladies that this can happen again and, you know, I can find love." As you could imagine, it was a major relief to the ladies. That is, until Brown appeared again, this time during the second group date, standing next to a windmill. Brown then proceeded to awkwardly retell the notorious story of her windmill sex with Weber.

"We're gonna have some fun, but before that, I'm going to tell you the story about this guy I once dated," Brown shared, later adding, "We go to Greece, and we go to our room. But it's not a room. It's a windmill. It's romantic, but I don't know. I'm starting to think, like, 'Is he just a nice guy?' Let's just say he proved me wrong. And then proved me wrong again, and then again, and then again in the morning. Yeah, four f***ing times."

It wasn't long before Brown was crying her mascara off behind the stage, realizing the huge mistake she made when she picked the dog food jingle writer with a girlfriend at home, over Weber.

Hannah Brown on Instagram
This is how I feel about my experience competing in the swimsuit competition. If those sky high eyebrows don’t scream confident and empowered, idk what will😂🤗 (y’all, I know the face is slightly terrifying..but let me live in this moment-girl was workin’ it💁🏼‍♀️) . I have been blessed to be surrounded by some of the most amazing women who are not only gorgeous, but extremely healthy and fit, and incredibly sharp leaders of our country. It’s okay to be all those things. You can still be a world changer, and turn heads in an evening gown or swimsuit. I appreciate my femininity and intellect and how both have made me the leader I am. #missusa #girlwerk #browgametoohigh #dontstopthatshine #missalusa #alabamahannah #18ateam #wedoboth
all smiles folks. 🤗#alabamahannah #lowqualitybts
happy valentine’s day to myself. I love you. XOXO 🥰🌹💕
sunny skies // squinty eyes #alabamahannah
IT’S OFFICIAL! MISS USA will be held May 21st in Shreveport, Louisiana {LIVE} on @foxtv! This is so surreal. Prayer warriors, let’s get goin’—peace and blessings all throughout this process! Y’all be ready to cheer on your #alabamahannah #brownforthecrown #rpmforthewin #missalusa #missusa #confidentlybeautiful
have hope, honey. isaiah 40:31
ready for all the clapbacks tonight? #WTA #thebachelor
staring down monday like... can you give me a sec, I can’t deal. #sundayscaries ⠀⠀⠀⠀⠀⠀⠀⠀⠀ [a lil’ dramatic, I’ll get it together]
tripleHD [it’s. a. thing.] my ppl. #girlgang
2018. you were an unexpected ride I didn’t know I was in line for🎢. You know, the one that made me laugh and giggle from the thrill, but equally cry and scream as the ride got scary and my stomach dropped. I was blessed in abundance this year. No doubt about that. But the ride took different turns than I expected or sometimes even wanted at the time. (crowns, cameras, and @coltonunderwood were not what I thought adulting was going to consist of, but blessed by all still the same) But the greatest thing about 2018? I finally started sitting in the front row of my own ride. I got honest. I got raw and real with myself. And I really got to know me (the good me, the bad me, and the ugly me...also the weird, crazy-fun me) so I could let other people get to know the real Han too. It’s a great victory to know WHO you are and WHOSE you are, and for that 2018, I am grateful. Thankful that the grace and mercy of my God is one thing that’ll never change with each new year. so hollla hellooo 2019 whatcha got? I’m ready! 🙋‍♀️✨🎉💕
the one time I walked a runway in almost nothing and six-inch heels. don’t mistake me as a @victoriassecret angel, you didn’t miss me in the fashion show. I like sugar too much. darn. #myprime #onehitwonder what have I eaten the past six months? 🤦🏼‍♀️🥨🥓🥞🍟🍔🍕🍞🥐🍦🍫🍿🍪🍩🍷🧂🥡 #allthesethings #gottagetitbacktogether
#serveday = #bestday with @abigail.lesley ! such a great day to join together as a church to be the hands and feet of Jesus all throughout our communities. #alabamahannah
hands up let’s do this. I’m packing up and feeling great. I laugh because I’m so calm, but also because this is truly happening. I feel like I should be freaking out—but fear is a liar so I’m gonna supermodel pose and be sunshine. Ahhh my #roadtomissusa two more daysss. Follow me here and @missalusa to stay updated. And yes, prayers are numero uno request. #missalusa #missusa #alabamahannah
I wish everyday was pool day—even with my sweet Roscoe who almost made me bust it in our failed photo shoot. 🙃👙☀️🐶 #roscoeiscamerashy #alabamahannah #missalusa
I had my national television debut and 8* seconds of fame yesterday on my favorite show @goodmorningamerica • • • If you know me, you know I love me some GMA and coffee every morning so this was too cool. (disclaimer: Strahan is a giant)
Up Next

"I don't know Peter. I question what I should have done," Brown told Weber. "You know, I question a lot."

Weber then made a great point, and didn't hesitate to call Brown out on always making him her third option. "Like, you know you asked Tyler out on the last episode. Did it ever cross your mind to, like, maybe ask me instead," asked Weber.

Following the season finale and reunion of The Bachelorette, Brown asked runner-up Tyler Cameron out, and the two reconnected for a short time, before Cameron ended up dating model Gigi Hadid.

"I don't want to be someone's, like, a third option. And so, then it was just tough 'cause then I found out that you had moved 20 minutes from where I live and, just, all this stuff kept happening," Weber explained, before ultimately suggesting to Brown, "This is so insane. What would you say if I asked you to, like, come and be part of the house?" Brown surprisingly answered, "I mean, maybe."

After all that Brown put Weber through, the windmill pilot was still down.

"I can't help how my heart feels," Weber stated. "I look at her and I just don't want to stop looking at her, and I want to just kiss her and just, like, had all this work out. And it didn't. And I know it didn't. And I feel like such a jerk because I have such an awesome group of girls here expecting to meet someone that was truly ready to have this work for them as well, and I don't know."

Twitter was down for Brown and Weber reconnecting as well:

Why am I low key rooting for Hannah Brown and Peter. #TheBachelorpic.twitter.com/sIjSdUWC7w

Can I steal your season?#TheBachelorpic.twitter.com/BCIF1efR58

me trying to figure out if it was possible for hannah to join the mansion AND win dancing with the stars at the same time #TheBachelorpic.twitter.com/weL9G7B5Cb

Honestly, if Peter just left with Hannah B & they cancelled this season, I really wouldn’t be mad. #TheBachelor

Mike should have been #thebachelor and Hannah B and Peter should be together. pic.twitter.com/KzzKjQ0HeK

If Brown ends up accepting Weber's offer and joins the rest of the ladies in the house, it would be a Bachelor first and so entertaining. Unfortunately, we have to wait until next week to find out.

More from Yahoo Entertainment Video:
Alex Trebek reveals exactly how his final episode of 'Jeopardy!' will end
And the winner of ‘The Masked Singer’ Season 2 is...
'Survivor' contestant finally able to open up about sexual misconduct