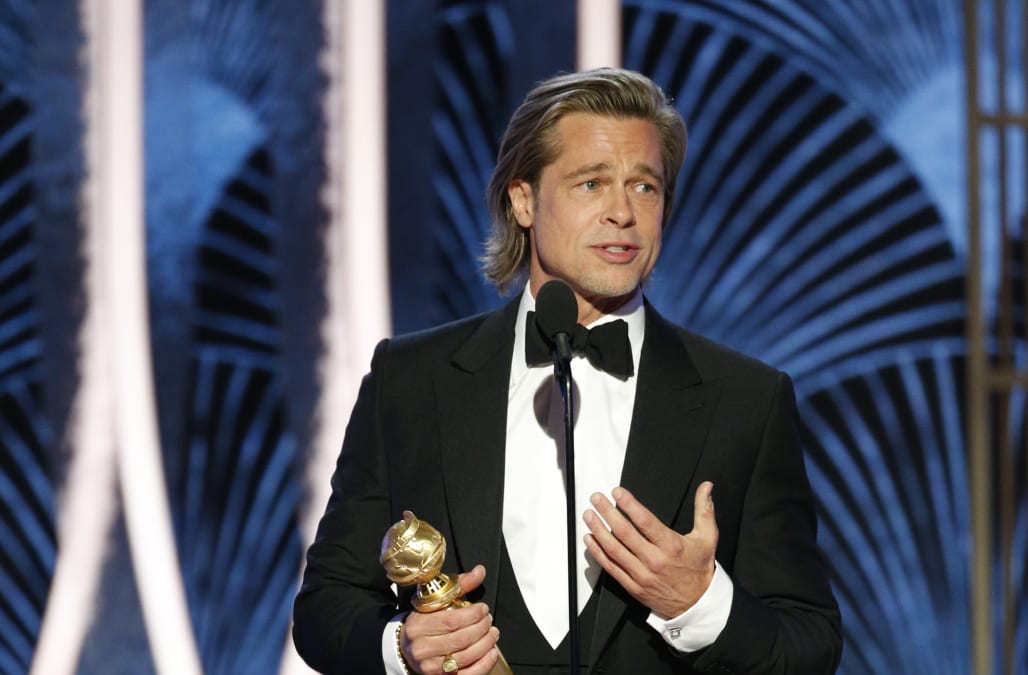 Brad Pitt's speech at the Golden Globes was well-received by just about everyone in the room — including his ex-wife.

As the on-and-off Hollywood bachelor accepted his Best Supporting Actor statue for "Once Upon a Time... in Hollywood," he used the opportunity to take a good-natured dig at the tabloids.

"I wanted to bring my mom, but I couldn't because any woman I stand next to, they say I'm dating," he quipped. "It would just be awkward."

As he spoke, the cameras cut to Jennifer Aniston at her table in the crowd. She broke into a laugh at the punchline.

"I wanted to bring my mom, but I couldn't, because anyone I stand next to they say I'm dating. It'd just be awkward..." - Brad Pitt#GoldenGlobespic.twitter.com/PtWWm6HutT

Seated next to Aniston was Reese Witherspoon, whose expression was decidedly unreadable. She did appear, however, to crack a smirk at the dating joke.

Aniston and Pitt wed in 2000 and divorced in 2005 after he infamously struck up a relationship with Angelina Jolie. Six children later, he and Jolie have also since call it quits.

Despite their painful history, the two have maintained that there's no lingering bad blood. Both were up for Golden Globe awards on Sunday night, so there was no question they'd cross paths — and according to Pitt, that was just a fun perk of the evening.

"I'll run into Jen, she's a good friend," he told Entertainment Tonight on the red carpet ahead of the ceremony.

Lest fans have any doubts, the friendship isn't just talk: In February 2019, Pitt attended Aniston's 50th birthday party, and he was also reportedly on the guest list just last month for her holiday party.

"The important people in her life gathered to celebrate with her," a People source said of her birthday bash. "Brad fits into that group, and it was natural that he would want to come."