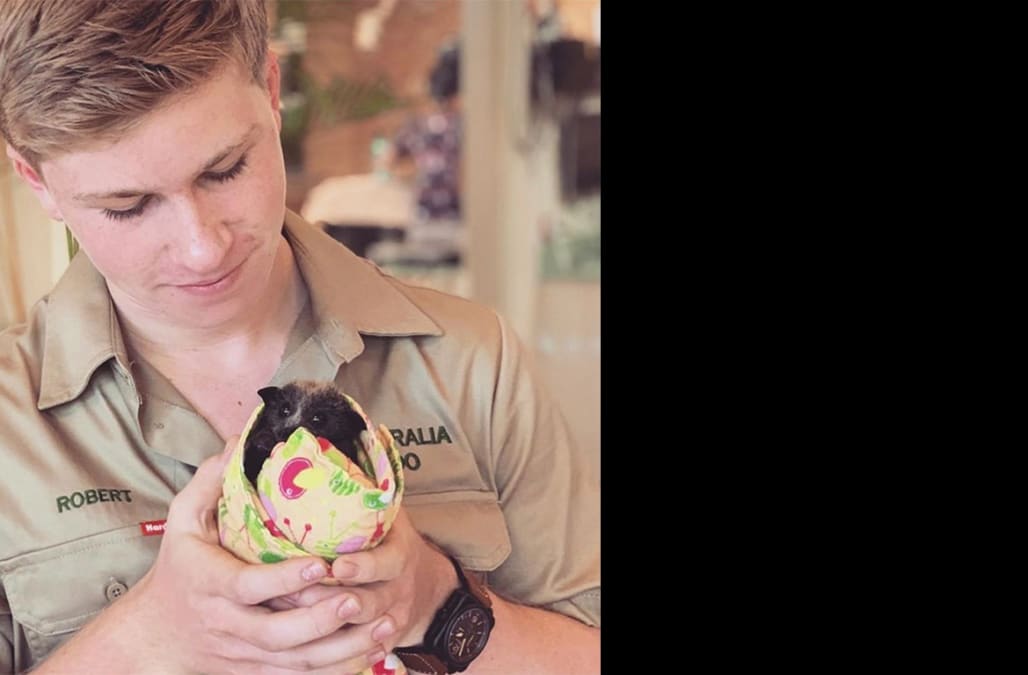 The Irwins are working overtime to help save the animals hurt in the Australia bushfires.

The Australia Zoo, which is home and office for Crikey! It's the Irwins stars Terri, Bindi and Robert Irwin, has treated more than 90,000 animals injured in the fires raging across the continent, the family of the late Steve Irwin shared on social media. The patients at the zoo hospital have included koalas, platypuses, possums, flying foxes and bats — and the ones that have survived have been extremely fortunate, considering an estimated half billion mammals, birds and reptiles have been killed since the fires started in September.

“Proud to be one of the many who are coming together to try to affect some positive change during this incredibly difficult time,” Robert wrote on Instagram Monday. “We’re here to help where we can for wildlife and to treat the survivors. Again, my greatest thank you goes to Australia’s incredible firefighters. If there’s anyone who can band together and lend a hand in crisis, it’s Australians.”

Robert, also a photographer, has been sharing photos of many of the rescues, including Bear the baby fruit bat. Hundreds of these bats have lost their home — and were transported to the zoo, which opened in 1970, from New South Wales.

“‘Bear’ is one of the hundreds of baby fruit bats that lost their homes in the horrific NSW fires. We’re doing our best to treat every animal we can - but unfortunately millions of other creatures are not as lucky as this little guy. Thank you to all of the firefighters on the frontline - if you want to help, please support local fire crews . You can find out more about our wildlife hospital and how to donate at wildlifewarriors.org” — @robertirwinphotography

“We’re doing our best to treat every animal we can — but unfortunately millions of other creatures are not as lucky as this little guy,” he wrote. “Thank you to all of the firefighters on the frontline — if you want to help, please support local fire crews. You can find out more about our wildlife hospital and how to donate at wildlifewarriors.org,” the family’s non-profit.

A few of the faces affected by Australia’s devastating bushfires... these orphaned fruit bats are in treatment at our wildlife hospital after being transported from NSW. Thank you for your comments and concerns about the zoo during Australia’s severe bushfire season, and how to help wildlife in the fires - Australia Zoo and our team have not been affected, but if you do want to help our efforts treating animals rescued from fire, you can donate to our non-profit ‘Wildlife Warriors’ and our hospital at the link in my bio.

Bindi told the heartbreaking story of Blossom, a possum who didn’t make it despite getting emergency care.

Blossom the possum was admitted to the #AustraliaZoo Wildlife Hospital after being caught in one of the bushfires burning in other parts of Queensland. We have such an incredible team who work day and night to protect gorgeous animals like Blossom. Devastatingly this beautiful girl didn’t make it even after working so hard to save her life. I want to thank you for your kind words and support. This is the heart-wrenching truth, every day is a battle to stand up and speak for those who cannot speak for themselves. Now more than ever we need to work together to make a difference and protect our Mother Earth. For more on how you can become a Wildlife Warrior visit www.wildlifewarriors.org 💙🙏🏼

“Devastatingly this beautiful girl didn’t make it even after working so hard to save her life,” she wrote. “This is the heart-wrenching truth, every day is a battle to stand up and speak for those who cannot speak for themselves,” she wrote. “Now more than ever we need to work together to make a difference and protect our Mother Earth.”

Sadly, Blossom’s babies didn’t survive either, said Terri. “Their injuries were too extensive from the bushfire. They were comforted, given pain relief, and received the best medical treatment possible.” She described the loss as “tough.”

Bindi also shared video of some gray-headed flying fox. They were flown to the Queensland zoo after the rescue center where they had been recovering was evacuated due to risk of fire. While the zoo has a hospital, sea turtle rehabilitation center, sea snake ward and an almost-built bird recovery area, Bindi said, “it’s still not enough [space] to keep up” with the massive number of rescues. “We need to build a new ward for our patients.”

Our @AustraliaZoo Wildlife Hospital takes in animals from all over Australia. Hundreds of grey-headed flying foxes, a species listed as vulnerable, have been flown to Queensland after the rescue centre they were recovering in was at risk from fire and evacuated. Some of the orphans are now being cared for by the team at the hospital until they’re big enough to go home, and there’s no threat of fire. 🦇 In September, flying fox admissions to the hospital skyrocketed by over 750% due to drought conditions and lack of food. Flying foxes are now being drastically affected by wildfires and we’re again seeing an influx of these beautiful animals from across the country. This week, we treated our 90,000th patient. To cope with so many animals being admitted to the hospital, in 2019 we opened a sea turtle rehabilitation centre, sea snake ward and are about to complete a new bird recovery area, but it’s still not enough to keep up. We need to build a new ward for our patients. Wildlife Warriors from around the world are asking how they can help us save native wildlife, you can donate on our website www.wildlifewarriors.org , or support our fundraiser to start construction of our newest ward by visiting the link in my bio! 💚

Terri also shared photos of Brian, a koala who suffered from smoke inhalation and had his home destroyed by fire. He’s since been released back into the wildlife in a safe area.

We are so thankful that Brian survived and that there are no fires currently where we are on Queensland’s Sunshine Coast. We continue to be inundated by wildlife affected by drought, fire, and storms in other areas. You can help by donating at this link:https://t.co/IWYLLAA5Nehttps://t.co/u0tlNFiTAA

Patient 90,000 was Ollie, an orphaned platypus, who has been getting around the clock care.

This is patient number 90,000 that the Australia Zoo Wildlife Hospital has treated. ‘Ollie’ the orphaned platypus is receiving round the clock care until he can be released back to the wild. Over the last 16 years, the hospital has provided 24/7 wildlife rehabilitation and an incredible animal rescue service. We’re so proud of this world-class facility! Thank you for your support - with pressures from drought to bushfires, wildlife need our help now more than ever.

The Australia zoo is located in Queensland, on the Sunshine Coast, where it has been safe from bushfires amid the widespread crisis. But there has been devastation across the continent, with 24 people dyingsince the start of the season, and 2,000 homes destroyed. Ecologistsfrom the University of Sydney estimated the deaths of an estimated half billion mammals — though others say the number is likely much higher.

Social media is filled with images of the ecological devastation, especially injured animals and those, including kangaroos, fleeing the fires.

Many celebrities shone a spotlight on the disaster during Sunday’s Golden Globes. Australian Russell Crowe skipped the ceremony to remain Down Under to protect his property, which badly burned in November. He won for The Loudest Voice and had presenter Jennifer Aniston deliver his acceptance speech, which said, “Make no mistake, the tragedy unfolding in Australia is climate change-based. We need to act based on science, move our global workforce to renewable energy, and respect our planet for the unique and amazing place it is. That way we all have a future.”

Other honorees also spoke about Australia’s fires. Ellen DeGeneres heralded the firefighters in her speech, and winner Patricia Arquette said “the continent of Australia on fire.” Australian Cate Blanchett also mentioned the firefighters battling the blazes amid the “climate disaster,” and Pierce Brosnan urged the country to “Stay strong. We're with you.” Phoebe Waller-Bridge announced she will be auctioning her Globes outfit to benefit firefighter relief.

Celebrities have also been donating to relief efforts. Nicole Kidman, who attended the Globes and said it has been “day-to-day” in her homeland, and husband Keith Urban, gave $500,000 to the Rural Fire Services. Singer Pink, who isn’t Australian but was just “devastated watching what is happening,” gave $500,000 as well.

Our family’s support, thoughts and prayers are with everyone affected by the fires all over Australia. We are donating $500,000 to the Rural Fire Services who are all doing and giving so much right now.