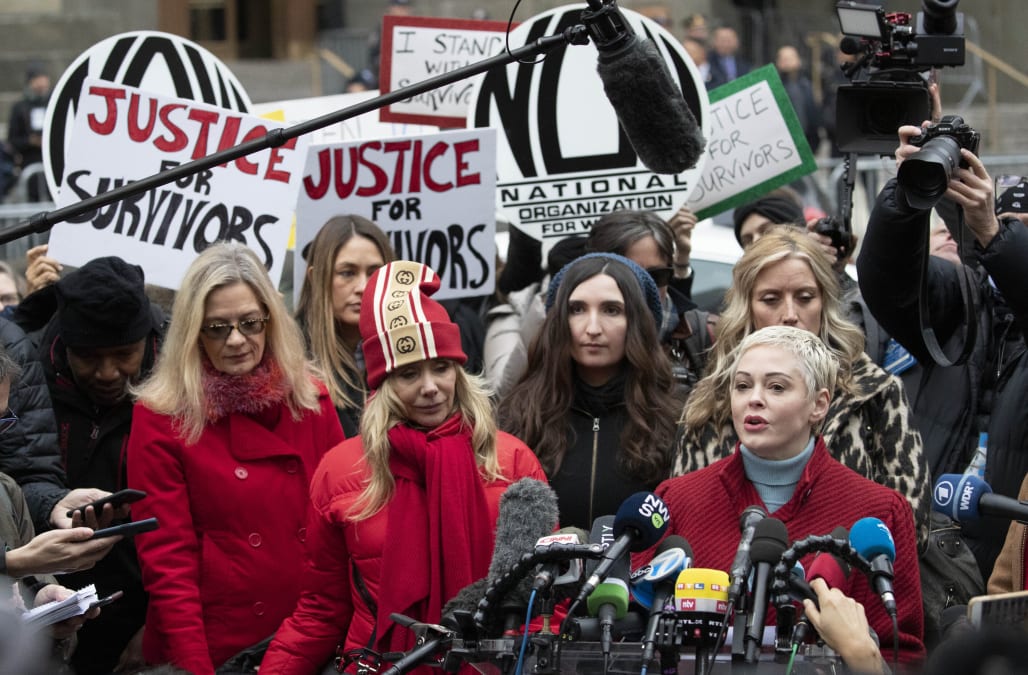 Rosanna Arquette, Rose McGowan and other women who have accused Harvey Weinstein of sexual assault hailed the start of his rape trial on Monday as an important step in the MeToo Movement.

“Today is a day for us to honor how far we’ve come and how much we’ve been tortured to get here,” McGowan told a crowd of journalists and survivors. “We are free. We are beautiful. We are strong. And you will never take that from us.”

The women braved the bitter January cold to gather outside of a Manhattan courthouse, where they memorialized the start of a trial that could eventually lead to Weinstein’s imprisonment. The mogul was one of the most powerful men in Hollywood, running indie studios such as Miramax and the Weinstein Company, and backing Oscar-winning films such as “Pulp Fiction” and “The English Patient.”

Arquette, an actress, film producer and director, who has accused Weinstein of assaulting her during a business meeting, said she hopes that his fall will lead to wider reforms in the entertainment industry. To make her point, she embraced the moniker of Time’s Up, a non-profit that was founded in 2018 by Hollywood celebrities to provide legal aid to victims of harassment.

Related: Women who have accused Harvey Weinstein of sexual harassment or assault

“Time’s up on sexual harassment in all work places,” said Arquette. “Time’s up on empty apologies without consequences. And Time’s up on the pervasive culture of silence that has enabled abusers like Weinstein. These abusers that make it unsafe for women to go to work every morning, to take a business meeting, or even to report a crime without retaliation. We are here to ensure that the focus of this criminal case is on the perpetrator — the perpetrator’s actions and not his victims. And that justice is served. The truth will prevail. And whether it is this trial or in the future, Harvey will be held accountable for his actions.”

Arquette and McGowan were joined in Foley Square in Manhattan by Louise Godbold, a trauma advocate, educator and actress; Dominique Huett, an actress on “Blue Bloods”; Sarah Ann Masse, an actress, writer and singer; Lauren Sivan, a television news reporter; and Paula Williams, an actress. All have accused Weinstein of assault or harassment. At times, their words threatened to be drowned out by feuding camera people and reporters, who screamed at one another for getting in their shots.

McGowan used her time at the microphone to address Weinstein directly.

“Dear Harvey, no matter what lies you tell yourself, you did this,” she said. “Today, Lady Justice is staring down on a super predator. You brought this upon yourself by hurting so many. You have only yourself to blame. I came here today to see this through. I came here today to stand side by side with these other women who you also harmed and to be a voice for the voiceless. … You thought you could terrorize me and others into silence. You were wrong.”