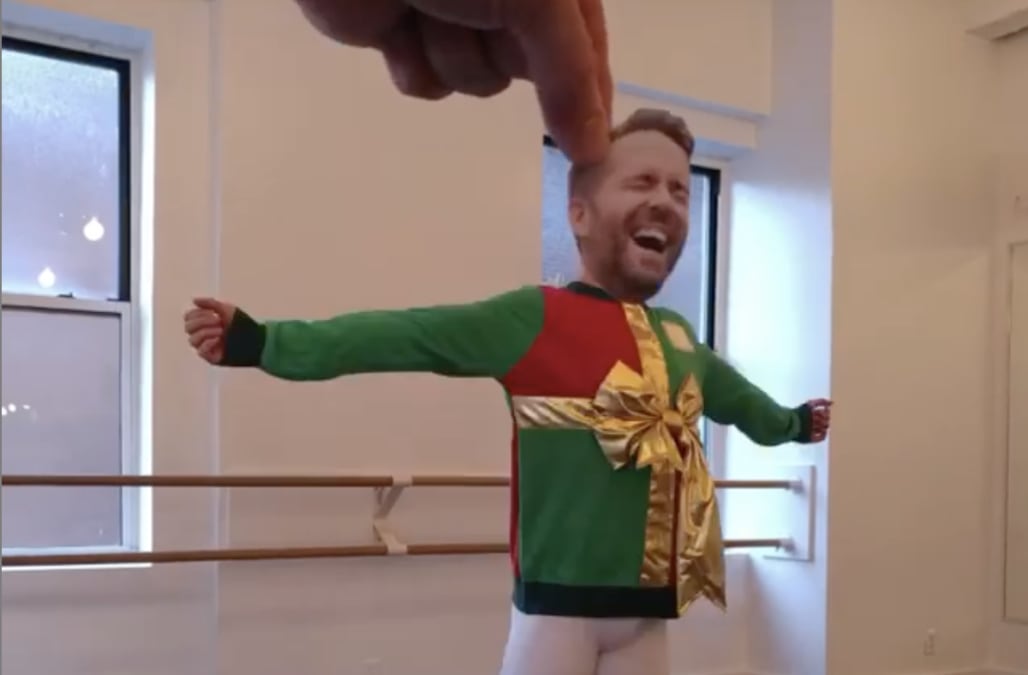 Joel Strong had a stack of old Tiger Beat magazines when he got the idea to make Leonardo DiCaprio an "influencer."

In 2014, the New York City-based artist started the Instagram account "mydaywithleo" where he superimposed cutouts of DiCaprio in modern settings. Since then, he's done the same with other celebrities such as Ariana Grande, Beyonce, Betty White and even politicians like Bernie Sanders and Alexandria Ocasio-Cortez.

Most recently, the artist's work has gone viral for a collaboration he did with Ryan Reynolds.

It all started when the actor reached out to Strong on Instagram. As part of his latest series where he superimposes celebrities onto people working "side jobs," he posted on his Instagram story that he was thinking of adding Reynolds to the series as a worker in a hardware store.

To Strong's surprise, Reynold's responded with the job he really would want to do, if he weren't an actor.

"One day he just slid into my DMs and said he wanted to express himself through the exciting medium of ribbon dancing," Strong told AOL. "That’s exactly how this came about."

The idea sounded funny, and from there, Strong and the "Deadpool" actor chatted to finalize the idea that would become the now-viral video.

"I showed Ryan the project when I was done. I wanted there to be a little slice in time when Ryan and me were the only ones that had seen it. I thought that would be special and it was," Strong said. "I know it sounds sappy but our emails from that day are very dear to me."

chase your dreams, ryan. i just want you to be happy. #mydaywithasidejob part 9 (ft. ryan ribbon) 38 lil ryans were made for this shoot. 587 frames made it into the final edit. no lil ryans were harmed during filming. this was a team effort and i would like to thank: @vancityreynolds for sliding into my DMs. @scott.a.weber for being a wonderful body double and holding difficult poses for long stretches! and @eliz_cowperthwaite & @downtowndancefactory for providing us a lovely dance studio to shoot in. @inrhodes for the countless hours you devoted to this project and building these ribbons with me! and @annezeygerman for your editing help! #stopmotion #stopmotionvideo #cutouts #ryanreynolds #ribbondancer

When Reynolds saw the finished video, he said: "Holy s***, this is amazing. I can't even make a joke. I'm speechless!!!!" according to Strong.

The actor posted the video on his Instagram, where it has been viewed over 5 million times. Strong even snuck in the 43-year-old's infamous ugly Christmas sweater that he turned into a chance to help the SickKids Foundation into the video.

"The one thing I’ve learned through all this is Ryan really is a swell dude and his priorities seem to be pointed in the right direction," Strong said.

How the video came to life

Strong told AOL this piece was his favorite that he's ever done, "mostly because (Reynolds) was involved from the beginning and he seems so happy with it."

This video was unlike any other that Strong had done before, but he was "up for a challenge."

"My video shoots are my own little baby. I blend stop motion, practical effects and forced perspective and it's important to me that nothing gets cheated," Strong told AOL.

behind the scenes of my ryan ribbon video: 1. thinking about adding reynolds hardware to my side jobs series. 2. ryan opening up to me about his real dream, the exciting medium of ribbon dancing. everyone deserves to be happy, even ryan. 3. 38 lil ryan cutouts. (i even found some pics of the back of his head, which would be essential if there would be any twirling or over-the-shoulder sassy moments in ribbon ryans global premier.) 4. some ribbon and an ugly sweater and i’m ready to go. 5. i didn’t clear it with ryan but i wanted him dancing in the ugly sweater since a) it’s funny & b) ryan has done a wonderful job of turning that viral moment into a charity for sick kids @sickkidsvs. i wanted to support that so i put a sweater on it. 6. @scott.a.weber navigating one of our ribbon designs. this is how slow people have to do things for my videos. 7. another ribbon design. @inrhodes helped with the builds and here he is getting the ribbon out of frame for the “toss.” we had to toss the ribbon because we didn’t have enough designs to adequately fill up ryan’s dance sequence, which i wanted to be flamboyantly long. 8. @scott.a.weber was able to hold poses for a long time! woweee! 9. here is scott standing on his head. incredible stuff really! 10. all the cutouts i used (minus @thehughjackman of course).

"I hold the cutouts and take every photo and capture everything you see in frame. Those things are important to me and so I work within those confines to make my videos," he added.

The video itself, which was shot at a dance studio in New York, took three hours to shoot. Scott Weber, a New York City-based performer and dancer, acted as Reynolds's body that artfully ribbon-danced throughout the video.

In the end, the 54-second video took 10 days, 587 frames, 38 cutouts of Reynolds and a lot of difficult poses to come to life. But it was all worth it for Strong.

"It's nice to hit your mark and make something that Ryan Rodney Reynolds thinks is wonderful," he said.

More from Aol.com:
Cereal killer? Gene Simmons has Twitter going wild over disturbing pictures of his breakfast
Coffee machine's utterly familiar brewing noise goes viral: 'Why is that the same pitch and everything'
YouTube star James Charles accused of saying N-word in video posted on his own Instagram