Ricki Lake reveals 'debilitating, embarrassing' secret she's held for 30 years: 'I am so done with hiding' 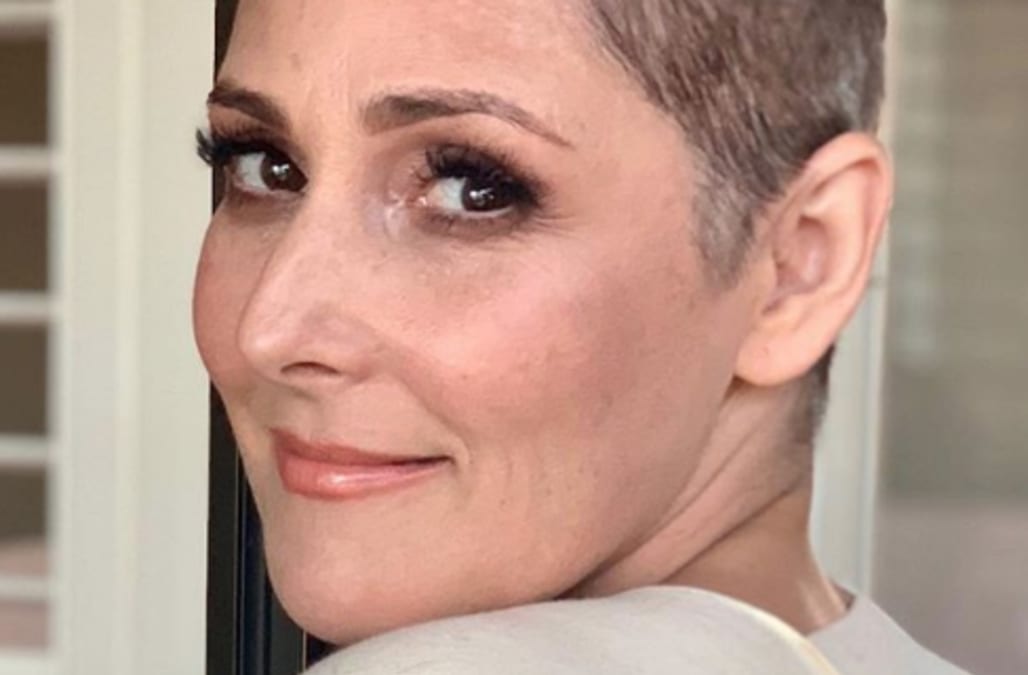 Ricki Lake is freeing herself from three decades of shame — and she looks darn good doing it.

"I am finally ready to share my secret. Deep breath Ricki.... Here goes," the "Hairspray" actress wrote on Instagram this week. "I have been struggling with hair loss for most of my adult life."

After three decades of "suffering in silence," Lake shared a photo of her shaved head and penned a long, revealing message about the "debilitating, embarrassing, painful, scary, depressing, lonely" battle that began in the late 1980s. "There have been a few times where I have even felt suicidal over it," she wrote.

Although she notes there are all sorts of contributing factors — pregnancies, stress, weight fluctuations and genetics among them — Lake believes the root issue traces back to "Hairspray," during which her then-healthy hair was repeatedly processed with harsh chemicals and teased into the now-iconic ultra-teased bouffant. (Today, the character of Tracy Turnblad is typically portrayed by actresses wearing wigs.)

Liberated and Free, Me. First things first, I am not sick. (THANK GOD.) I am not having a mid-life crisis. nor am I having a mental breakdown, though I have been suffering. Suffering mostly in silence off and on for almost 30 years. AND I am finally ready to share my secret. Deep breath Ricki…. Here goes….. I have been struggling with hair loss for most of my adult life. It has been debilitating, embarrassing, painful, scary, depressing, lonely, all the things. There have been a few times where I have even felt suicidal over it. Almost no one in my life knew the level of deep pain and trauma I was experiencing. Not even my therapist/s over the years knew my truth. I know that by sharing my truth, I will be striking a chord with so so many women and men. I am not alone in this and my goal is to help others while at the same time unshackle myself from this quiet hell I have been living in. Ever since I played Tracy Turnblad in the original Hairspray back in 1988 and they triple-processed and teased my then healthy virgin hair every 2 weeks during filming, my hair was never the same. (Yes, that was all my own hair in the film.) From Hairspray to Hairless. :( In my case, I believe my hair loss was due to many factors, yo-yo dieting, hormonal birth control, radical weight fluctuations over the years, my pregnancies, genetics, stress, and hair dyes and extensions. Working as talent on various shows and movies, whether DWTS or my talk show, also took its toll on my fine hair. I got used to wearing extensions, really just over the last decade. All different kinds, tried them all, the ones that are glued on, the tape-ins, the clip ins, and then into a total hair system that I hated, and finally to a unique solution that really did work pretty well for me for the last 4 or 5 years. I tried wigs on a few occasions but never could get used to them. It all felt fake and I was super self-conscious and uncomfortable. I’ve been to many doctors, gotten steroid shots in my head, taking all the supplements and then some. My hair would recover and then shed again. It was maddening. To read more: please go to my Facebook page. ❤️

Over time, Lake says she became accustomed to wearing faux hair extensions as she tested all types of growth products and systems, from vitamin supplements to getting steroid shots in her head. Some of the solutions actually worked, but only temporarily: "My hair would recover and then shed again. It was maddening."

Lake, 51, sought both physical and emotional treatment as she hid her hair loss from the public. But in recent weeks, she decided to buzz her hair short and simply come clean. "It is a new year and new decade and a new me," she wrote on Facebook.

She added that she'll sometimes wear faux hair, "but now it is for fun, not because I am hiding anything. I am so done with hiding."

The candid post has already proven resonant with fans, with many commenting that they quietly face identical struggles. "Welcome to the new you without dealing with the stress of hair loss," one wrote alongside a photo of her own shaved head.

"Thank you for living your truth and speaking out," wrote the mom of a child who has alopecia, an autoimmune disease that causes sudden hair loss. "You look absolutely beautiful!!"

"Good for you for letting go of all the expectations society puts on us as women!" another said. "I mean, if a man starts to lose his hair he would be told to shave it."

The influx of support isn't lost on Lake: "I am not alone in this," she wrote, "and my goal is to help others while at the same time unshackle myself from this quiet hell I have been living in."

Lake's fresh start comes three years after the suicide of her ex-husband, Christian Evans, which left her devastated. The couple had separated in large part due to his battle with bipolar disorder, but they continued to live together and support each other after the split.

Ricki Lake and Christian Evans together
Today marks 3 months since losing my beloved twin flame #christianevans. (2/11/17) My loss is immeasurable. He was and continues to be my greatest teacher. Christian's kindness and compassion was felt by all who were lucky to know him. I am so grateful for the 6 1/2 years I shared with this beautiful spirit. Thank you, my precious angel for loving me unconditionally. I am starting to heal my broken heart. Time, along with wonderful friends, both new and old, are helping me to process and accept my new normal. Life is beautiful, precious, and I am one of the lucky ones. I had true love. #RIPmyangel 11:11 #kindnessisking #mentalillness #bipolar Sending so much love to Pam Evans Collette Simonetta today and everyday.
15 months ago today, I lost my beloved #christianevans to mental illness. #neverforget #bipolar #loveiseternal #compassion #love #1111 #ashkiidighin #blessed🙌 💓
Happy Birthday to my angel #christianevans. Inspired by my greatest teacher to live life to the fullest. Fitting I’m flying back to our beloved #ibiza on what would have been his 47th bday. 😘🌈💓#loveiseternal #kindnessisking #esvedra #1111 💓✈️🎉🙌💕🔥🔥🙏
💓😇💓
Still my Valentine in my heart. #christianevans #loveiseternal #healing #mentalillness #bipolar #neverforget 💗🙌🙏
This is unconditional love. Eternal love. #christianevans lost his battle w/ #bipolardisorder 20 months ago today. Though he is no longer here in the physical, his kind spirit is everywhere and guides me w/ everything I do. #kindnessking #neverforget #suicideawareness #loveiseternal #1111 #healing
4 years ago today. Happy times in #Ibiza with my favorite guy. #christianevans 💓
One year ago today, 1/29/17 ,my #beloved #christianevans though mentally ill and hospitalized multiple times was somehow able to buy a gun. He would use that gun to take his life two weeks later. 😢 We must do something to keep guns out of the hands of the mentally ill. #suicideprevention #neverforget #bipolar #guncontrol #mentalillness #loveiseternal ✨💓✨
My beloved #christianevans and I got engaged 7 years ago today on our favorite beach #satrinxa in #ibiza. So wonderful to be back on this beautiful island to celebrate, honor, and continue to heal. My journey has not been easy but today I am able to say I am truly happy and grateful. #loveiseternal #twinflame #healing #blessed🙌 💓🙏💕🔥🔥
It is with a heavy heart that I share that my beloved soulmate, Christian Evans has passed. The world didn’t understand this man, but I did. He succumbed to his life long struggle with bipolar disorder. For anyone who has ever lost a family member or friend to mental illness, my heart goes out to you. I am a greater person for having known him and spent the past 6 and a half years of my life with him. He was a man of love and what mends my broken heart today is knowing that he is finally at peace and his spirit is free. Rest in peace, my love
LOS ANGELES, CA - JULY 12: Actress Ricki Lake (R) and husband Christian Evans attend the 2012 Outfest opening night gala screening of 'VITO' at the Orpheum Theatre on July 12, 2012 in Los Angeles, California. (Photo by David Livingston/Getty Images)
LOS ANGELES, CA - NOVEMBER 09: Actress Ricki Lake (R) and her fiance Christian Evans arrive at the Los Angeles premiere of 'More Business of Being Born' at Laemmle's Royal Theatre on November 9, 2011 in Los Angeles, California. (Photo by Amanda Edwards/FilmMagic)
NASSAU, BAHAMAS - JANUARY 13: Actress Ricki Lake (L) and boyfriend Christian Evans attend the 2011 PokerStars Caribbean Adventure at Atlantis Paradise Island on January 13, 2011 in Nassau, Bahamas. (Photo by Michael Kovac/WireImage)
8 years ago today, 9/18/10 my sons and I survived a tragic early morning house fire. And through the fire I literally found my true love. Crazy story and experience that I can only describe as #divine intervention. #grateful for all of it. #loveiseternal #phoenixrisingfromtheashes 🔥🙌🙏🌈💓
10 months ago today I lost this precious man. #christianevans , my #beloved my #twinflame. Literally my favorite person in the whole world. He is missed by so many that knew his #kindness, #love and #compassion, and also were familiar with his struggles and pain. #neverforget #mentalillness #loveiseternal 💗🙏💓#1111
Up Next