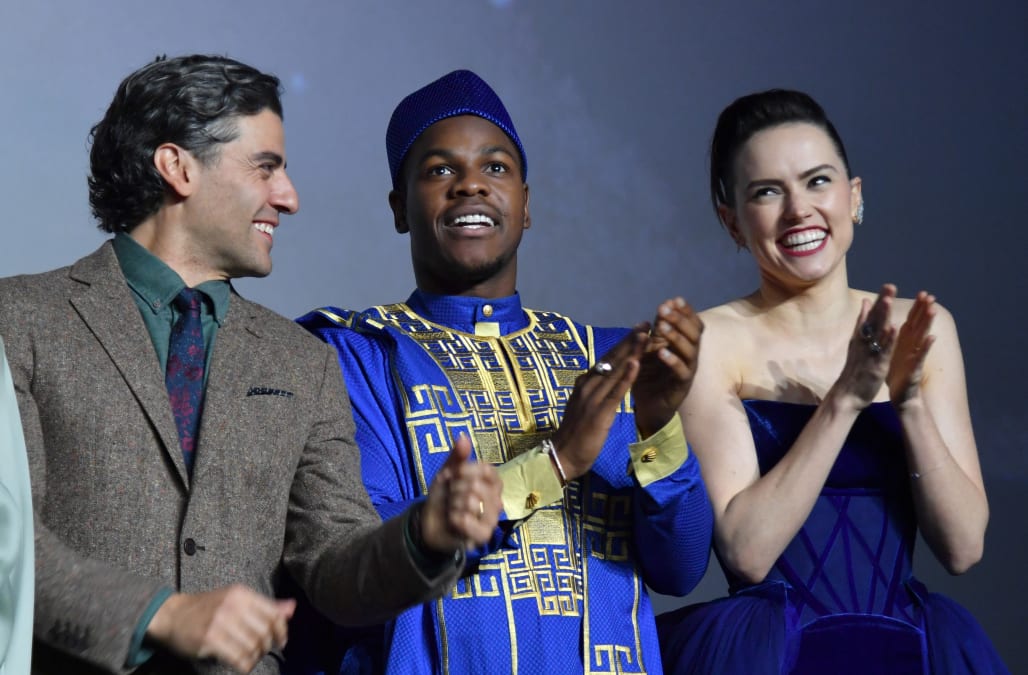 Warning: This article contains spoilers for the movie, "Star Wars: The Rise of Skywalker."

John Boyega is facing backlash online after a series of social media posts that some "Star Wars" fans saw as an inappropriate description of his co-star, Daisy Ridley.

The actor, who plays Finn in the series’ most recent trilogy, made the comments when interacting with fans on Instagram. On New Year's Eve, Boyega posted a video of himself dancing, along with the caption, "Stepping into 2020 like."

One fan commented on the video with a joke about the ending of “Star Wars: The Rise of Skywalker,” in which villain-turned hero Kylo Ren (played by Adam Driver) sacrifices himself to save Ridley’s character, Rey.

The two characters kiss just before Kylo’s demise, and some fans apparently viewed his death as paving the way for Boyega’s character, Finn, to become romantically involved with Rey.

"My boy after realizing Kylo died so he can date Rey," the fan wrote.

"It’s not about who she kisses but who eventually lays the pipe. You are a genius," Boyega responded.

The response, which implied his character would have sex with Ridley’s, quickly drew backlash online, as many social media users saw Boyega’s comments as objectifying Ridley. Some called his words “gross” and categorized him as a "misogynist."

"Bro you’re extremely disgusting and gross also f****** disrespectful… you cannot be this jealous of Adam Driver dude," one person wrote to Boyega in a now-deleted tweet.

Boyega responded to that tweet, stating that he was simply referring to his and Ridley’s characters.

"You obviously don’t know the difference between a fictional world and reality," Boyega tweeted.

You obviously don’t know the diffrence between a fictional world and reality.

He added that Ridley "knows she isn’t the character" and would not be offended by his joke.

Boyega seemingly responded to the controversy on Twitter the same day, posting a series of images from "The Rise of Skywalker" — all of which depicted Ridley and Driver’s characters fighting, not kissing — along with the caption, "Star Wars romance."

"The Rise of Skywalker" debuted in theaters on Dec. 20, bringing a conclusion to the series' latest trilogy. The film has so far earned more than $400 million at the domestic box office, despite receiving significantly worse reviews than the previous two "Star Wars" films, "The Force Awakens" and "The Last Jedi."