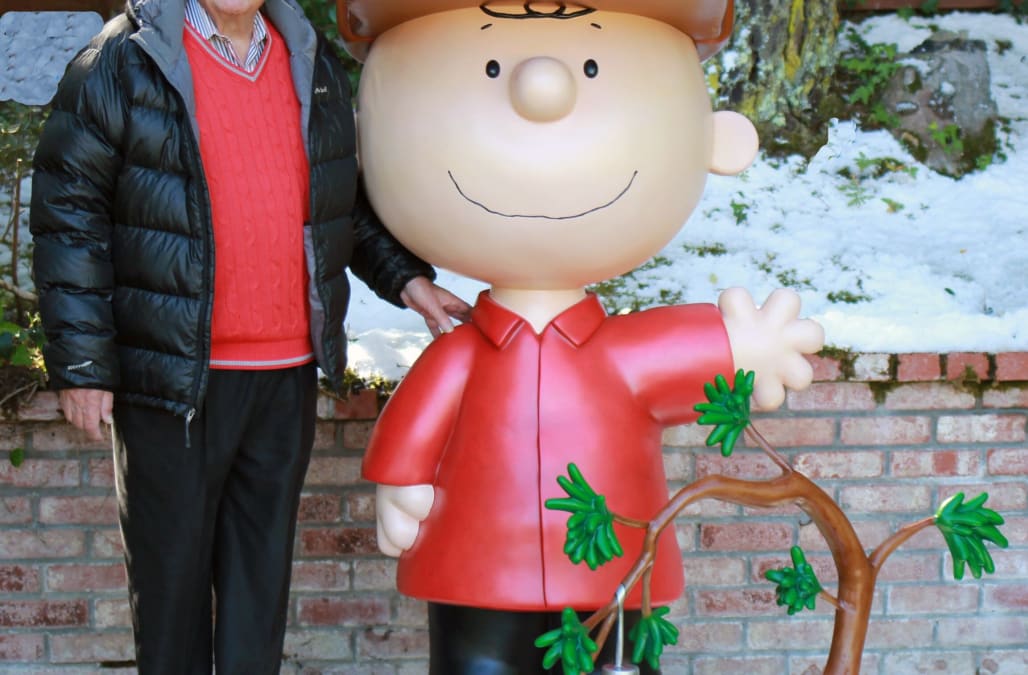 LOS ANGELES — Lee Mendelson, the producer who changed the face of the holidays when he brought “A Charlie Brown Christmas” to television in 1965 and wrote the lyrics to its signature song, “Christmas Time Is Here,” died on Christmas day, his son said.

Mendelson, who won a dozen Emmys in his long career, died at his home in Hillsborough, California, of congestive heart failure at age 86 after a long struggle with lung cancer, son Jason Mendelson told The Associated Press.

Lee Mendelson headed a team that included “Peanuts” author Charles Schulz, director Bill Melendez, and pianist and composer Vince Guaraldi, whose music for the show, including the opening “Christmas Time Is Here,” has become as much a Christmas staple as the show itself.

Mendelson told The Cincinnati Enquirer in 2000 that he was short on time in finding a lyricist for the song, so he sketched out the six verses himself in "about 15 minutes on the backside of an envelope."

He found a choir from a church in his native Northern California to sing the song that sets the show's unforgettable tone, beginning with Mendelson's words:

“Christmas time is here, happiness and cheer, fun for all that children call, their favorite time of year.”

The show won an Emmy and a Peabody Award and has aired on TV annually ever since. The team that made it would go on to create more than 50 network specials, four feature films and many other “Peanuts” projects.

Mendelson also took other comic strips from newspapers to animated TV, including “Garfield,” for which he produced a dozen television specials.

His death was first reported by The Daily Post of Palo Alto.

Born in San Francisco in 1933, Mendelson's family moved to nearby San Mateo when he was a boy, and later to nearby Hillsborough, where he went to high school.

He graduated from Stanford in 1954, served in the Air Force and worked for his father's fruit-and-vegetable company before going into TV for the Bay Area's KPIX-TV.

In 1963 he started his own production company and made a documentary on San Francisco Giants legend Willie Mays, “A Man Named Mays,” that became a hit television special on NBC.

Mendelson liked to say that he decided to turn from the world's greatest baseball player to the world's worst: Charlie Brown.

He and Schulz originally worked on a “Peanuts” documentary that proved a hard sell for TV, but midway through 1965 a sponsor asked them if they could create the first comic strip's first animated special in time for Christmas.

Schulz wrote the now-familiar story of a depressed Charlie Brown seeking the meaning of Christmas, a school Christmas play with intractable actors including his dog Snoopy, a limp and unappreciated Christmas tree, and a recitation of the nativity story from his best friend Linus.

Mendelson hired Guaraldi to provide the music after hearing the jazz artist's song “Cast Your Fate to the Wind” while driving across the Golden Gate Bridge.

Mendelson said the team showed the special to executives at CBS a week before it was slated to air, and they hated it, with its hyper-simplicity, dour tone, biblical themes, lack of laugh track and actual children's voices instead of adults mimicking them, as was common.

“I really believed, if it hadn't been scheduled for the following week, there's no way they were gonna broadcast that show,” Mendelson said on a 2004 documentary for the DVD of the special.

Instead, it went on to become perhaps the biggest holiday classic in television.

“It became part of everybody’s Christmas holidays,” Mendelson told The Los Angeles Times in 2015. “It was just passed on from generation to generation. ... We got this huge initial audience and never lost them.”

Mendelson is survived by his wife, Ploenta, his children Lynda, Glenn, Jason and Sean, his stepson Ken and eight grandchildren.