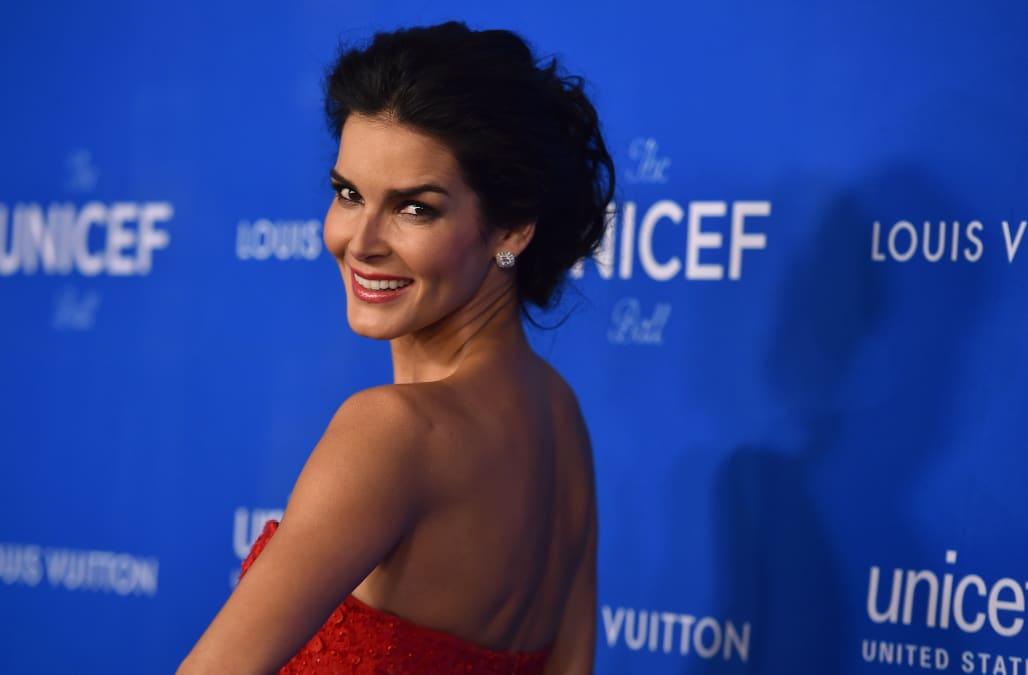 It was a magical Christmas in every way!

"Rizzoli and Isles" star Angie Harmon revealed that she just got engaged to "Days of Our Lives" actor Greg Vaughan over the holiday.

Harmon, 47, shared the news on Instagram on Christmas Day, along with photos of the sweet moment Vaughan, 46, popped the question.

Marry, Marry Christmas!! ❤️🎄💍 #moderndaybradybunch #blessed #grateful #family #christmas2019 Wishing you the most wonderful holiday from our family to yours!

"Marry, Marry Christmas!!" she wrote in the caption. "Wishing you the most wonderful holiday from our family to yours!"

Vaughan, who stars as Eric Brady in "Days of Our Lives," also shared the news on Instagram, writing in the caption, "Well...that was FUN!!!"

Well...that was FUN!!! 😜 Repost @angieharmon Marry, Marry Christmas!! ❤️🎄💍 #moderndaybradybunch #blessed #grateful #family #christmas2019 Wishing you all the most wonderful holiday from our family to yours!

The happy couple also shared photos of their children spending Christmas together, along with the hashtag #moderndaybradybunch.

Their blended family definitely have a lot in common with the Brady Bunch. Harmon has three daughters, Finley Faith, Avery Grace and Emery Hope, from her previous marriage to former NFL player Jason Sehorn.

The couple and their kids posed for photos in cute, matching holiday sweaters.

Most beautiful celebrity engagement rings
Lucy chose her own engagement ring, a cushion-cut diamond on a thin gold band, for her marriage to Desi Arnaz.
The diamond on Queen Elizabeth II's engagement ring came from a tiara owned by Prince Phillip's mother, Princess Alice of Battenberg.
John F. Kennedy gave Jacqueline Bouvier a custom Van Cleef & Arpels engagement ring featuring a 2.84 carat emerald and a 2.88 carat diamond.
Joe Dimaggio gave this eternity band, set with 35 baguette-cut diamonds, to Marilyn Monroe at their 1954 wedding.
Princess Grace originally received a Cartier eternity band (left) comprised of rubies and diamonds from Prince Rainier III of Monaco, but he soon swapped it for a 10.5-carat Cartier diamond ring.
Taylor's third husband, Mike Todd, gave her this "friendship ring" of 29 karats before their 1957 wedding.
Robert Wagner hid Wood's ring, a freshwater pearl surrounded by diamonds, in her champagne glass at Romanoff's restaurant on Rodeo Drive when he proposed in December of 1957.
Frank Sinatra gave Farrow a pear-shaped solitaire diamond ring before their July 1966 wedding.
In 1968 (four years into their first marriage), Richard Burton gave Elizabeth Taylor the Krupp Diamond, a 33.19-carat Asscher-cut jewel. Though not technically an engagement ring, it's one of the most iconic pieces of jewelry of all time.
When Lady Diana Spencer and Prince Charles became engaged in February 1981, Diana chose a Garrard ring with a 12-carat oval sapphire surrounded by 14 solitaire diamonds.
Matthew Broderick gave SJP her stunning emerald-cut ring before the couple's 1997 marriage.
Will Smith proposed to Jada Pinkett with this emerald-cut diamond in 1997.
David Beckham proposed to Victoria Adams with a three-carat marquise-cut diamond.
For his 2004 engagement to Garner, Ben Affleck selected a 4.5-carat diamond solitaire ring set in platinum from Harry Winston. The two have since called it quits.
Jay Z gave Beyoncé a $5 million, 18-carat Lorraine Schwartz diamond in April 2008.
King's beau, director Kyle Newman, presented her with a pavé-set solitaire diamond in April 2007.

Tom Brady gave Gisele a four-carat diamond solitaire ring when they became engaged in late 2008. The couple married during a private ceremony in February 2009.

Francois-Henri Pinault presented Hayek with an oval-shaped diamond ring from Neil Lane before the couple wed on Valentine's Day in 2009.
Blunt's three-carat diamond-and-platinum ring from husband John Krasinski was custom-made by Neil Lane.

It looks like Vaughan's and Harmon's families have been spending a lot of time together over the past year.

Ever since they went public with their relationship in 2018, the couple has been sharing sweet photos of their sons and daughters hanging out together, like this cute group shot from last July.

Better late than never! 🇺🇸Happy July Fourth!🇺🇸 (From all of us trying to smile into the sun!😂) #moresunglasses#blessed#grateful#boysareloud#moderndaybradybunch#handsomes#beautiespic.twitter.com/WhvIKCp1YA

Vaughan isn't shy about sharing his love for his new fiancée on social media. He posted this photo with Harmon in October along with a romantic note in the caption.

"How I prayed for you & look forward to everyday with you, for all my life!" he wrote.

How I Prayed For You & look forward to everyday with you, for all my life! #i❤️youAH

All the best to the happy couple!

More from Today Show:
What is pneumonia and who is at risk? ESPN reporter's death sparks concern
Madonna cancels concert citing 'indescribable' pain: 'I have to listen to my body'
Hard-boiled eggs sold at Walmart, Costco recalled over listeria concerns