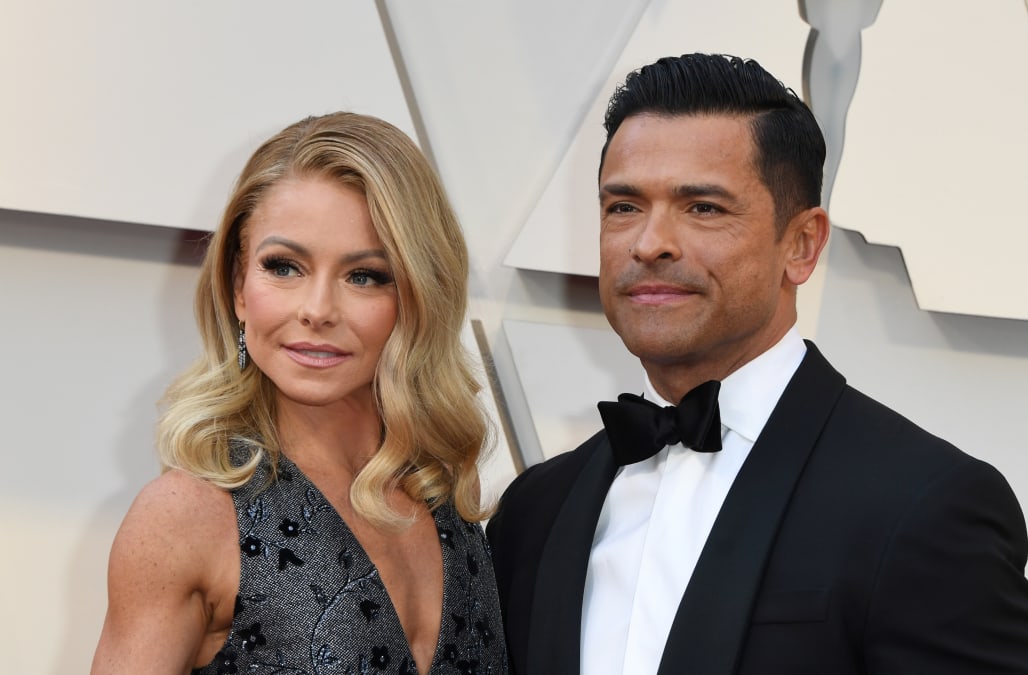 Mark Consuelos caused a scene at his 16-year-old son Joaquin's wrestling match over the weekend — and it was all caught on video and sent to TMZ.

The Riverdale star, who is married to Kelly Ripa, went into protective-dad mode after Joaquin's opponent ripped off his headgear. Consuelos, 48, stormed the mat and appeared to say something to the other boy. He was restrained and eventually pushed back by another adult. In the video, you can hear other parents tell Consuelos to calm down.

Yahoo Entertainment reached out to a rep for Consuelos, but did not immediately receive a response.

Ripa was also in attendance and apparently stayed calm while Consuelos rushed to their son's defense. TMZ reports, "Joaquin's opponent won the match and Mark was vocally and visibly upset, leaving the gym for a few hours to cool off before eventually returning to the all-day tournament."

Kelly Ripa and Mark Consuelos' sons
Papi chulos 🔥🔥🔥🔥
Congrats Michael on being cast as young Hiram Lodge on @thecwriverdale however @instasuelos and i would like to take this opportunity to remind you and your siblings that as your fiduciaries we are hereby entitled to 10% of all future earnings hereto wit, or something like that 😜⭐️
Dos Hirams. Who is TV’s biggest villain? Find out tonight. @teenchoiceawardsig
🌞🌝⭐️ (in no particular order) #daddy
HOLLYWOOD, CA - OCTOBER 12: Kelly Ripa, husband Mark Consuelos, daughter Lola Consuelos, sons Michael Consuelos and Joaquin Consuelos attend the ceremony honoring Kelly Ripa with a star on the Hollywood Walk of Fame on October 12, 2015 in Hollywood, California. (Photo by Axelle/Bauer-Griffin/FilmMagic)
A double #tbt 2014-2018 Same bat channel, different bat time. #summersolstice #greece 🌞🌞🌞 swipe 👉🏼
Happy Father’s Day to the fathers, the #daddy and the future dads of my life. (Young ones, learn from your elders)
HOLLYWOOD, CA - OCTOBER 12: Mark Consuelos, Lola Consuelos, Kelly Ripa, Joaquin Consuelos and Michael Consuelos at the Kelly Ripa Star Ceremony on The Hollywood Walk Of Fame on October 12, 2015 in Hollywood, California. (Photo by Albert L. Ortega/Getty Images)
NEW YORK, NY - MAY 09: Mark Consuelos, Joaquin Consuelos, Kelly Ripa, Lola Consuelos and Michael Consuelos attend 26th Annual GLAAD Media Awards at The Waldorf Astoria on May 9, 2015 in New York City. (Photo by Laura Cavanaugh/FilmMagic)
NEW YORK, NY - JUNE 09: (L-R) Actress/talk show host Kelly Ripa, Joaquin Antonio Consuelos, Commissioner of the National Hockey League Gary Bettman, Actor Mark Consuelos, and Michael Joseph Consuelos attends game 3 of the 2014 NHL Stanley Cup Final at Madison Square Garden on June 9, 2014 in New York City. (Photo by Mike Coppola/Getty Images)
Up Next

Joaquin is the youngest of Consuelos and Ripa's three children. They are also parents to son Michael, 22, and 18-year-old daughter Lola. The Live With Kelly and Ryan host often talks about her kids on her morning talk show. Earlier this year, she received backlash for joking that Michael is "chronically poor" living on his own in Brooklyn.

"I don’t think he ever really experienced, you know, extreme poverty like now," she quipped. "He's experiencing being an adult."

Ripa later addressed the incident saying, "People love to have fake outrage over something they didn't see."

It remains to be seen if she'll address the wrestling incident with her usual humor on Live.