Meghan McCain and Whoopi Goldberg talk out their differences on 'The View': 'We fight like we're family' 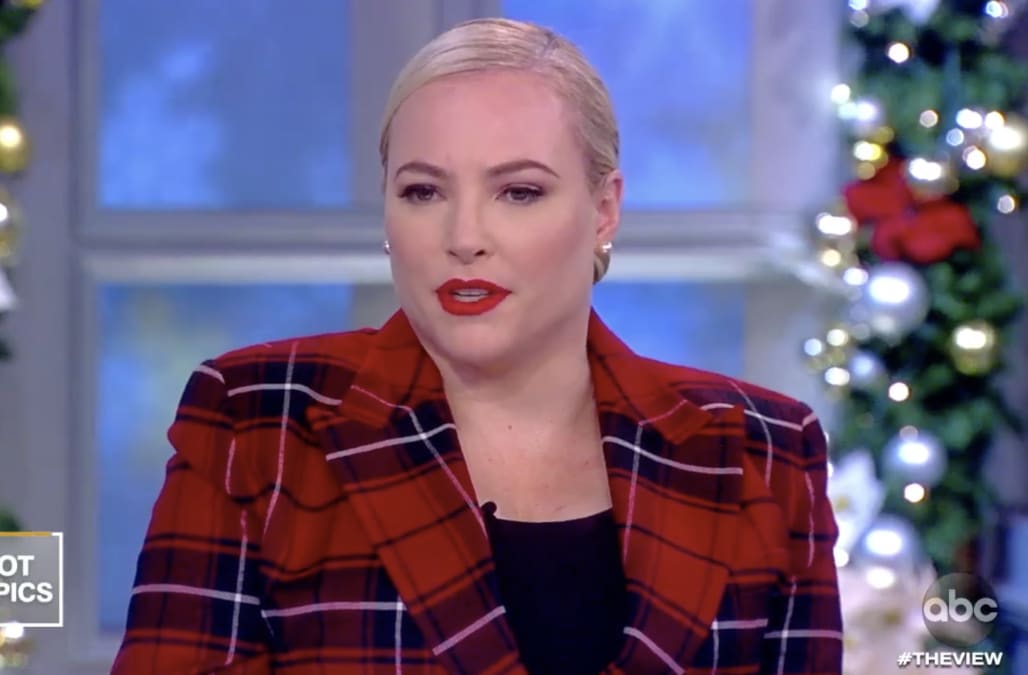 Meghan McCain and Whoopi Goldberg are addressing their tense exchange on Monday's episode of The View.

During the top of Tuesday's show, the co-hosts opened up about the awkward moment from earlier this week, in which Goldberg told McCain to "stop talking" following a heated discussion about President Donald Trump's possible impeachment.

"We just got to do a little cleanup before we do anything," Goldberg said. "Things get heated on this show. If you watch this show, you know this has happened over the years. We're really passionate, this is our jobs. We come in, we talk to each other, sometimes we are not as polite as we could be. That’s just the way it is. But you're going to be dealing with the same thing when you sit around the table with your family. And you don’t agree or somebody says something and it goes off the rails."

"This is part of what we do; this is not an indication that women can’t sit around and talk. This is not an indication that we don’t know how to deal with each other on camera. This is happening in real time," she continued. "Stuff happens on this show in real time. And everybody, wherever you sit in all this, don’t assume that we are over here with little butcher knives under the table. It just doesn’t work that way. This is our gig, sometimes it goes off the rails ... so everybody just calm down. It's a TV show."

McCain chimed in, asking, "Can I say something?"

"Whoopi and I get along great. I love you very much," she exclaimed. "I’ve loved you for a long time. You were good friends with my dad [late U.S. Senator John McCain]. We fight like we're family. It's all good. We’re not tearing the set apart. Calm down. All of you, OK? It’s all good."

"I think it is a lens into what's happening politically in the country," she added, of why the talk show is unlike any other on TV. "[Whoopi] and I spoke this morning and I think that America is at very heated levels right now and I don’t love it. I don’t think anybody at home loves it, anyone in the country, but it is representative of what’s going on and it is raw and real. We are all passionate women. I am hyper, hyper conservative, everybody else at the table is not. And sometimes we are going to clash heads, but I think it is indicative of what the holidays are like for a lot of people ... but we also came together and we are fine and everything is good."

McCain continued on, saying that the media is "blowing" up her and Goldberg's exchange.

"I just don’t think it would happen with men," she argued. "There were a lot of commentators, Greta Van Susteren in particular, talking about the coverage of us, and how sexist the language always is especially reporting on when the fights happen on the show. I, for one, am over it."

.@WhoopiGoldberg and @MeghanMcCain address heated comments on Monday's show: "We're really passionate — this is our jobs," Goldberg says. "Sometimes it goes off the rails — and it does."
"We fight like we're family — it's all good," McCain adds. https://t.co/f8u2wc159Spic.twitter.com/3CNUbWgiuV

But according to Goldberg, this won't be the end of controversial discussions on the show.

Just a few hours before going live on Tuesday, McCain took to Twitter, seemingly reacting to Goldberg's previous comments. Her message felt very different from what she said on-air.

"Good morning - to all the fellow conservative 'girls' who won’t be quiet," she tweeted, along with a Game of Thrones gif of Daenerys Targaryen (Emilia Clarke) with one of her dragons.

Back in October, Goldberg had another tense exchange with McCain when she told her to "respect" her View co-hosts while on the panel -- also made up of Abby Huntsman, Sunny Hostin and Joy Behar -- when they were again discussing Trump's impeachment drama.

"Let me tell you something about The View," Goldberg told McCain. "This show has always had the ability to have different points of view, which we respect around the table. When we talk to each other, we also exhibit respect. So, when I’m saying to you, 'Hold up, because we’re not hearing each other,' I’m not trying to cut you off, I’m trying to get you heard."

15 PHOTOS
Meghan McCain on and off 'The View'
See Gallery