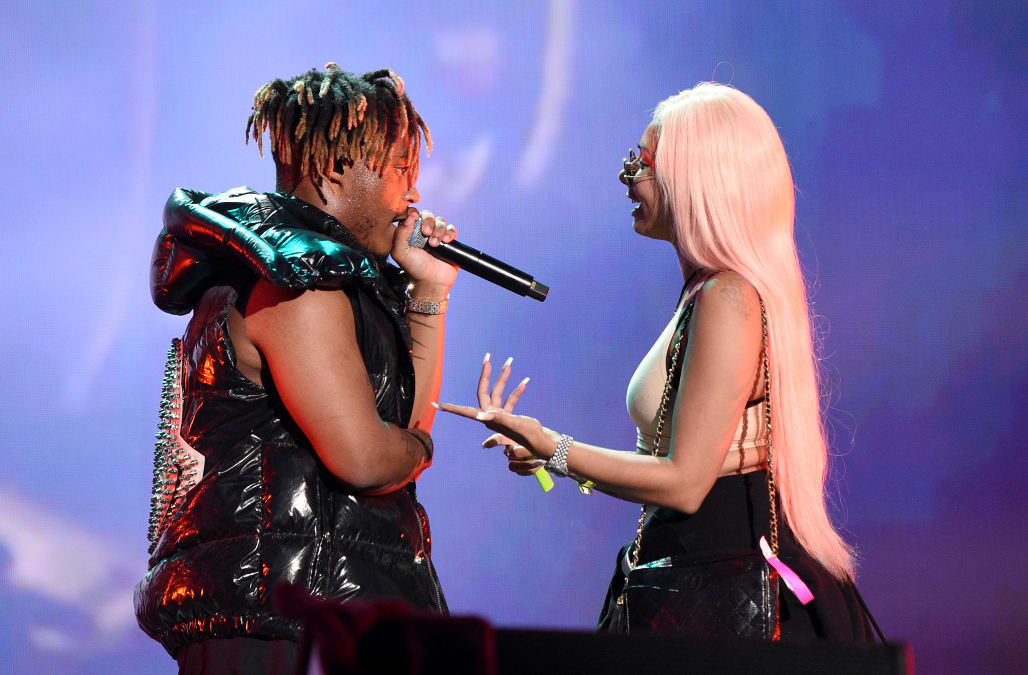 Juice WRLD's girlfriend is breaking her silence one week after the late rapper's untimely death.

Ally Lotti took to the stage at the Rolling Loud festival at the Banc of California Stadium in Los Angeles on Sunday and shared a moving message to the crowd during a tribute to "Lucid Dreams" rapper.

"I just wanted to come out here and let everyone know that Jarad loved every single person that he helped on this earth. He literally loved every single one of you guys," she said. "There is not a time when he had shown me any different love then he felt for you. He wants everyone to know that you need to take any negative, any negative thing in your life, he would tell you every time he saw you and change that to a positive situation."

Juice Wrld's girlfriend speaks out for the first time since the rapper has passed. pic.twitter.com/PUdsgbeWUc

As Lotti finished her speech, the audience began to chat her name as she walked off the stage.

Juice WRLD died on Sunday, Dec. 8 after suffering a seizure at Chicago's Midway airport. A rep for the Chicago Police Department told ET at the time that shortly after arriving in Chicago, the rapper "suffered what appears to be some type of medical emergency according to people traveling with him. There were no signs of foul play and all individuals aboard the aircraft are cooperating with CPD and have given all of their information."

On Friday, his loved ones gathered for an open-casket funeral in Harvey, Illinois, to remember the late rapper.

Nicki Minaj also publicly paid her respects to the young performer at the Billboard Women In Music Awards on Thursday.

"I recently had the pleasure of working and touring with Juice WRLD," Minaj shared, after thanking Billboard for the Game-Changer Award that evening. "I had a great conversation with him one day and while we walked to the stage, he held my hand and told me to stay calm and to pray. He said he had been trying to do just that. I was so shocked to hear him of all people tell me that but right there in that moment with him telling me that I actually did feel calm and I actually felt like, 'Hmm, what I am actually worried about?'"

"I felt like he was a kindred spirit, and looking back now, I wish I did something differently or said something to help," Minaj continued. "He spoke to me in detail about how in love he was with his girlfriend and how passionate he was about music and when he was in the studio with me, he did so many songs, so quickly."

"I want to honor him tonight and send my condolences to him and his family and his girlfriend and his friends and everybody," Minaj added before opening up about the importance of not passing judgment on people, especially public figures.

"It's so important that we don't pass judgement so that people don't feel ashamed to speak up and ask for help," Minaj said. "It's so important we talk about mental health, it is, because people are dying because they don't want to express how miserable they are and how much they are suffering, so they'd rather medicate themselves."

"I came here tonight to ask people to be a little bit more forgiving and understanding, especially with entertainers," she added. "We can't have a bad day."

As of Tuesday, December 9th, the cause and manner of death for Juice WRLD (real name Jarad Anthony Higgins) were still pending, a rep for the Cook County Bureau of Administration told ET.

"The Cook County Medical Examiner's Office has determined that additional studies are required to establish the cause and manner of death for 21-year-old Jarad A. Higgins," the rep shared in a statement last Monday. "Additional studies include cardiac pathology, neuropathology, toxicology and histology."