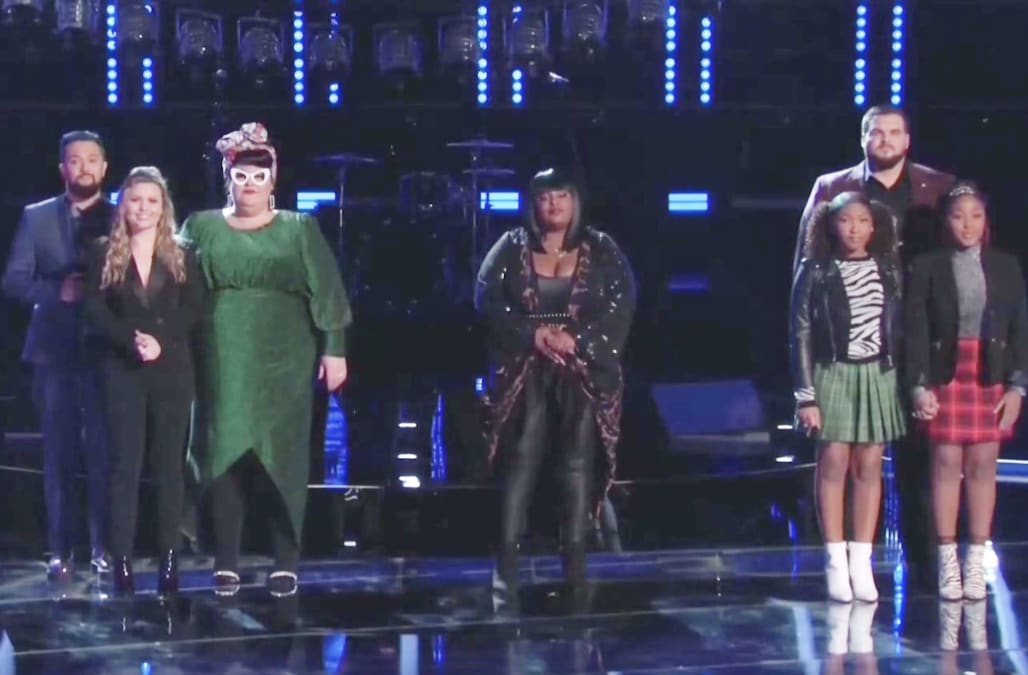 Allow me to not-so-humble-brag for just a moment. I’ve been covering The Voice since it premiered in 2011 (which is longer than all of the coaches, except for Blake Shelton, have stuck with the show). And while there are occasional shockers, I’ve sort of got this prediction thing down to a science by now. This week, I predicted that the top three contestants moving on to next week’s Season 17 finale would be Team Legend’s Katie Kadan, Team Kelly’s Jake Hoot, and Team Blake’s Ricky Duran. And when Carson Daly announced the results Tuesday, the top three were... Katie, Jake, and Ricky.

I also predicted that Team Gwen’s Rose Short would land in the middle-three pack that would sing for the Save, and that Rose would win, thus rounding out the finale’s top four. And I was also correct in this prediction.

However, there were a couple notable developments this Tuesday. All four coaches will be represented in next week’s showdown. This means Gwen Stefani, who only made it to the finale once — way back in Season 9, with Jeffery Austin — finally got another shot at victory, thanks to Rose. Conversely, last season’s winning coach, John Legend, had two-thirds of his team wiped out this week, when Marybeth Byrd and (in the only slight surprise of the night) Will Breman landed in the bottom two and were automatically eliminated. But John certainly still has a great chance at another win, since Katie is far-and-away the best contestant in this top four, and really one of the best contestants in the history of The Voice.

Anyway, in the sing-off that ultimately secured Rose’s advancement — with an impressive 51 percent of the public vote (over Kat’s flat and lackluster “You’ve Got a Friend” and Hello Sunday’s ambitious but uneven “Chandelier”) — the soul diva wisely went with the song that once put current Voice coach Kelly Clarkson the map in 2002. After Kelly belted the the Carole King/Aretha Franklin classic “(You Make Me Feel Like) A Natural Woman” on American Idol Season 1, she went from underdog to frontrunner... and maybe the same thing could now happen for Rose, though Rose will face stiff competition next week, especially from Katie and Kelly’s country crooner Jake.

But — speaking of Team Kelly country crooners — there is hope for Rose, for anyone who does not win next week, and for anyone who didn’t even make the finale. Case in point: On Tuesday’s results show, Kelly joined forces with her former contestant, Kaleb Lee. Kaleb only placed sixth in Season 14, but he just released a duet single featuring Kelly, “I Dream in Southern,” and he just performed it on national TV. Not too shabby! He may end up being the real winner of Season 14. (No dis, of course, to that season’s actual Kelly-coached champion, Brynn Cartelli, whom Kelly has also professionally supported.)

Tune in next week, when we find out who will be the winner of Season 17.

More from Yahoo Music:
The Butterfly effect: Ex-girl group star meets her destiny on 'The Masked Singer'
A totally B-A-N-A-N-A-S ‘Voice’ episode: Gwen Stefani celebrates 15 years as a solo star, but loses star contestant
‘You can share your grief with America’: ‘Voice’ contestant Marybeth Byrd breaks down during tearful dedication to late grandfather