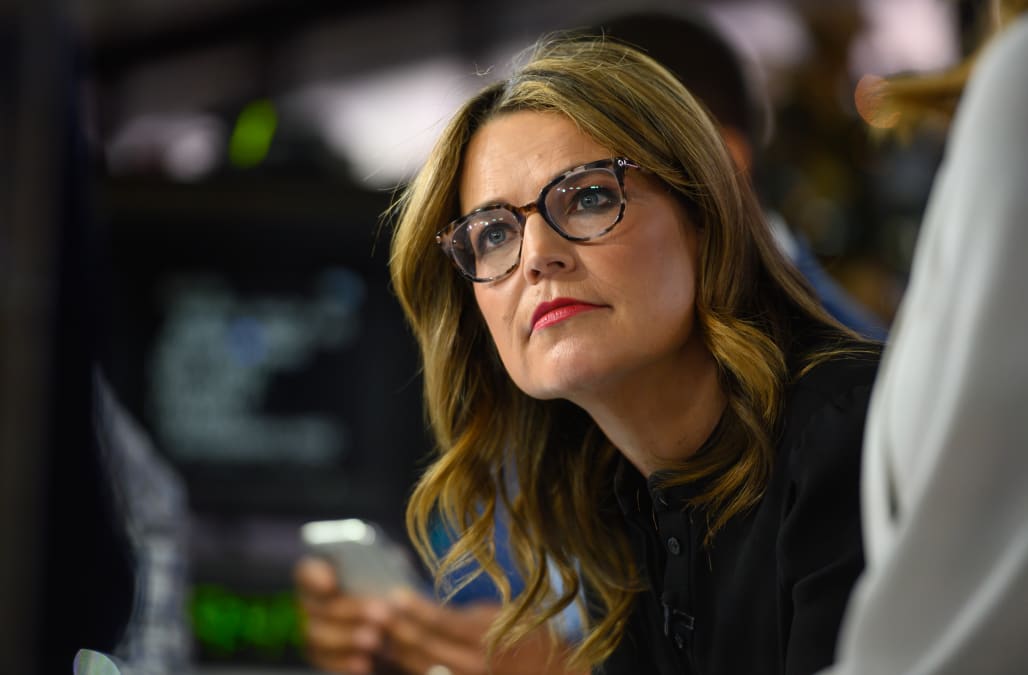 “She’s had some laser treatment, so now she’s actually going through the surgery, and she’s going to keep us posted,” Hoda Kotb said on-air during the show. “We wish for her a very speedy recovery.”

Guthrie has been in and out of work since the week of Nov. 27, when she revealed that an accident with her son had left her temporarily blind in her right eye. Toddler Charley, who turned 3 this month, accidentally hit her with the pointed edge of a toy.

At the time, Guthrie said her retina was torn, not detached, and doctors were "essentially trying to weld back this tear in the retina very carefully, and really trying hard to avoid the retina detaching." She added that they were "trying to avoid having to do the full surgery" that she's now undergoing.

Savannah Guthrie with her kids and husband on Instagram
Here’s the reason I’ve been out for a couple days. This little cutie has super strength!! Last week, Charley threw this train at my eye and turns out it caused a large tear in my retina, which has caused me to lose sight temporarily in my right eye! It was a little bit touch and go over the last few days but it looks like the retina will hold and not detach and I won’t need full eye surgery. The docs are hopeful the laser procedures are working to keep the retina from detaching and I won’t have to have surgery. Very thankful for good doctors and good medical care. And thankful for your good wishes!!
Fly Eagles Fly #familyjerseys
All glammed up with my handsome man for #Oscars #VFparty
Sunday shoot = bring your daughter to work day ❤️❤️❤️
Kindergarten is a milestone! And milestones are a time to reflect and count your blessings. Well, I am thanking God today for my beautiful, charming, loving, and kind children. And thanking Him for the gift of motherhood. I will never stop being grateful and amazed to be so blessed.
Feeling royally blessed and grateful on Mother’s Day ❤️
Best. Day. Ever!!! So fun having my little girl come to work today and hang with some of her @todayshow besties!
Up Next

Days after the incident, Guthrie was back at work to co-host the Macy's Thanksgiving Day Parade. She wore glasses on the air and continued to do so as she settled back into her normal routine.

"Thankful!" she captioned a parade day snapshot with Kotb.

Guthrie was also wearing glasses — and appeared to be in high spirits — earlier this week when she celebrated Charley's birthday. Her older daughter, 5-year-old Vale, and husband Michael Feldman also appear in the smiley Instagram.

She's managed to crack a few puns about the situation, tweeting in November, "Eye’ve been out with an eye injury inflicted by energetic toddler!! But things are looking up!!"

More from Aol.com:
Bette Midler wants another Justin Timberlake public apology -- this time for Janet Jackson
Lizzo claps back with gratitude after twerking controversy
Lin-Manuel Miranda's '12 Days of Christmas Favorites' will get you in the holiday spirit (exclusive)