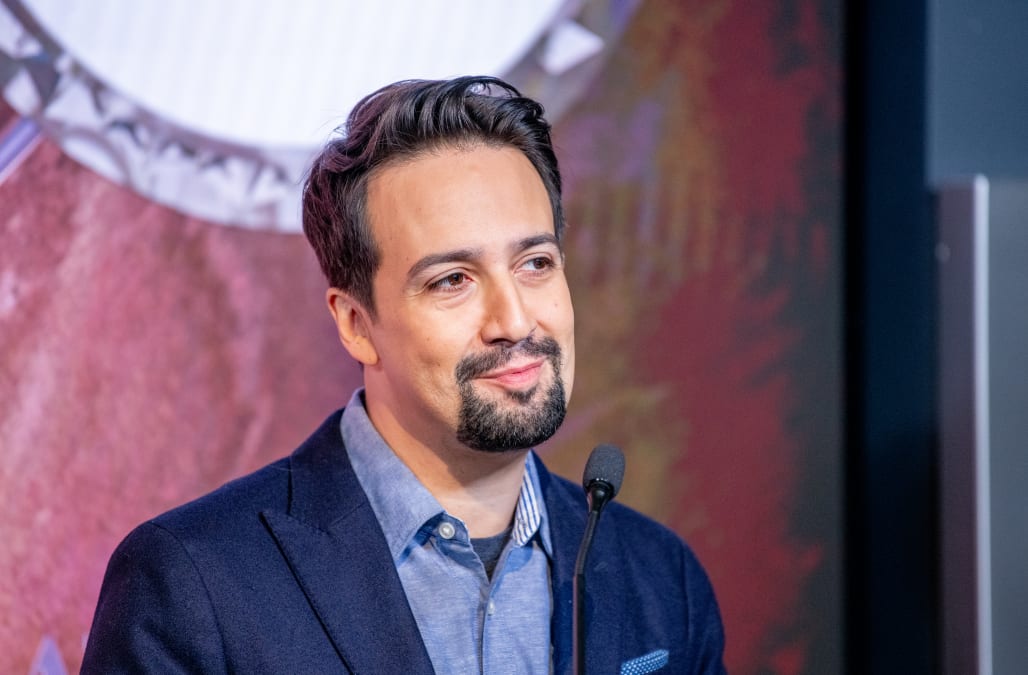 Lin-Manuel Miranda is all about decking the halls — ideally with some locally-sourced holly.

The multitalented "Hamilton" playwright is a big proponent of shopping small this holiday season, which is why he's working with American Express to encourage customers to visit locally-owned neighborhood establishments as they check items off their gift lists.

As we approach the 12-day countdown to Christmas, AOL's Jennifer Kline spoke with Miranda about some of his personal favorites, from the perfect spot for a winter brunch to the hilarious video of his kids he won't share on Twitter.

AOL: You seem like you'd be a very good gift-giver. What's your favorite present that you've ever given?

LIN-MANUEL MIRANDA:  I got my wife a piece of art from her alma mater. Her alma mater is MIT, and there was a gallery of really close-up images of two nerve cells reaching for each other. My wife is a scientist, so that was very special for her.

Favorite local brunch spot in Washington Heights? [Miranda grew up in the upper Manhattan neighborhood and still lives in the area today.]

Favorite video you took of your kids this year?

Oh, that's really easy. Yesterday I was working on a song for the closing credits "In The Heights." I was at the piano, and my son creeped into the shot and started doing this crazy dance party that totally usurped whatever I was writing. You ever see the video of the guy who's doing the news conference video and his daughter comes marching in? It was like that, but there was no one to usher him away.

No, because his face is very visible. I never show my kids' faces on Twitter.

PHOTOS: Lin-Manuel Miranda through the years

You can't go wrong with chocolate in my house. It's my wife's favorite thing, and my kids', too.

Favorite "Star Wars" scene — other than the one you're supposedly in? [Miranda reportedly has a small role in "Star Wars: The Rise of Skywalker," but all details have been tightly kept under wraps.]

Are you a big "Star Wars" fan?

I am a big "Star Wars" fan; that's why it's hard to choose. I think, honestly, it's in "Return of the Jedi," when Luke decides not to turn because "I am a Jedi like my father before me."

Good answer. Don't stress. I think that even if you'd ruminated on that question for 24 hours, you'd still pick the same scene.

Favorite charity to support this year?

We've been supporting the Hispanic Federation for several years now. We began working with them after Hurricane Maria. They kept boots on the ground there and set up an office in Puerto Rico, and they shifted from emergency disaster relief to creating a more sustainable Puerto Rico and working with local organizations on everything from health centers to solar power.

Can I pick a songwriter? There's a songwriter named Ali Dineen who has a new EP coming out. Her last EP knocked me flat and was one of my favorite things of that year. It's all the more special because I was her seventh-grade English teacher. She's become an incredible songwriter and I'm looking forward to her next batch of tunes.

Favorite spot to grab a drink after a Broadway show?

There's that Restaurant Row on 46th St; I've been to most of the places there. I like the Brazilian place [Brazil Brazil], I like Orso. Joe Allen's is a classic Broadway spot with all the posters of Broadway flops over the years.

Gosh, that's hard. I'm gonna use this as a shameless plug: Anthony Ramos is a f--king movie star in the "In the Heights" movie, and that'll come out in June 2020.

This last one is more of a stretch: Favorite teaser you can share about the Met Gala in 2020? [Miranda will co-host the annual event alongside Meryl Streep, Emma Stone and Vogue Editor-in-Chief Anna Wintour.]

I will be the least-interestingly dressed person there. And my wife will look amazing. That's all I know.