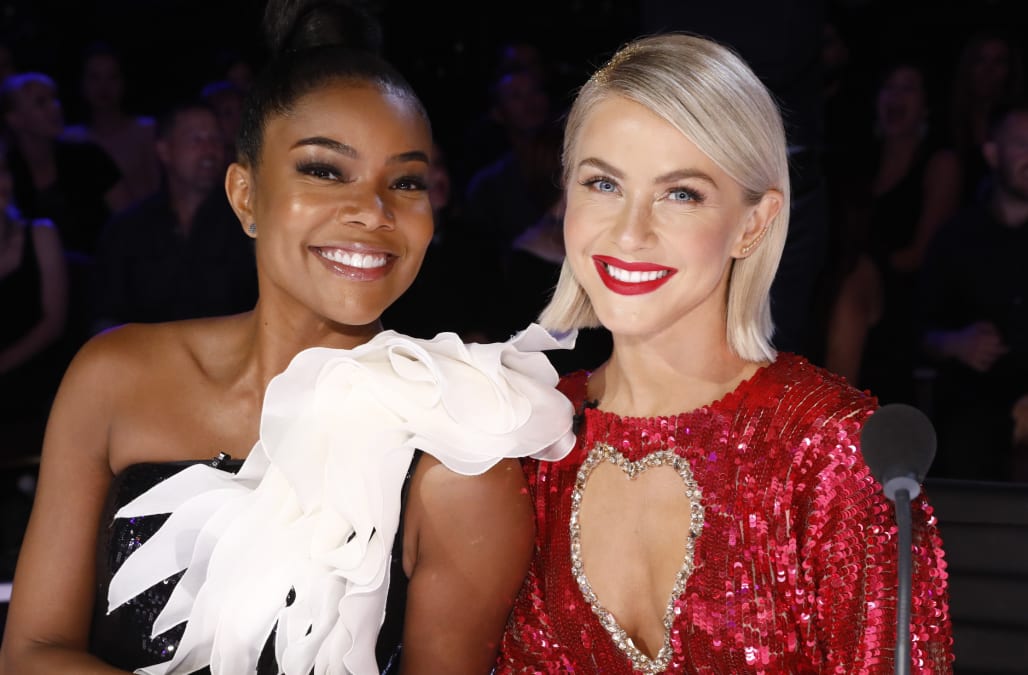 Julianne Hough has nothing but support for Gabrielle Union.

Following news that both Hough and Union will not return as judges on America's Got Talent after one season on the NBC show -- and amid claims of a "toxic culture" on its set -- the 31-year-old former Dancing With the Stars pro tells ET she's "really happy" Union met with the network.

"That's awesome. Oh good. That's amazing," Julianne told ET's Rachel Smith at the 87th Annual Rockefeller Center Christmas Tree Lighting Ceremony at Rockefeller Center in NYC on Wednesday. "Honestly, we've been here doing so many rehearsals I haven't really looked at my phone, but that makes me really happy. That's such an amazing step in shifting the paradigm of the workplace and it's great."

Julianne, who was with brother Derek Hough, also opened up about their family plans for the holidays.

"PJs the night before, hot chocolate, singing, dancing, all the fun things," Derek said their traditions. "To be honest with you, I'm actually much more relaxed during the holidays and everybody else is crazier. I'm chill. This is the time to rest and gear up for the next season, next year."

With Julianne adding, "Adventure too. We grew up in Utah so we go skiing and snowboarding and sledding and play with the kids. We're very outdoorsy people."

Meanwhile, earlier this week, Julianne also spoke about Union's claims, telling People Now: "I know who I am, and as egocentric as this may sound, I totally and utterly love myself. And so I choose to, with whatever I do, just take all the lessons that I’ve learned and add them to my vocabulary and move forward."

While Hough didn't address the specific allegations in Variety's report about the show and its network -- namely that there were allegedly racially insensitive situations as well as alleged "excessive notes" about Hough and Union's appearances on the show -- she did speak about the importance of a comfortable and safe working environment.

"I just believe and value at the highest regard that everybody has a voice and should be heard, first and foremost," she said. "And then I believe that the paradigm of the workplace and how you do business and work with people now, it’s shifting, and I think that the people that really want to see change happen are going to authentically and positively… do that. And so that’s all I really have to say about that."

While Hough may not be returning to AGT, she is still working with NBC; she's set to star in Holidays With the Houghs -- a Christmas special with her brother, Derek Hough -- and appear on the annual Christmas in Rockefeller Center program for the network.

"There [are] so many projects that I’m doing with NBC that I’m really excited about," she said. "There [are] lots of things out of our control, and so as long as I stay authentic in who I am and everybody else involved also stays connected to who they are, that’s all that matters, and not trying to please or have a perception of what you think people want to hear, and just staying true."

In a statement to Variety at the time, Hough said she had "a wonderful time" on the show, adding that she's "happy to continue my working relationship with NBC."

Though Union hasn't addressed the specific allegations either, she did take to Twitter to thank her friends and fans for their support after receiving messages from the likes of Eva Longoria, Ellen Pompeo and Ariana Grande.

"So many tears, so much gratitude. THANK YOU! Just when you feel lost, adrift, alone... you got me up off the ground," she tweeted. "Humbled and thankful, forever."

In a statement to ET amid the allegations, the network, as well as the show's production companies, Fremantle and Syco, said: "We remain committed to ensuring a respectful workplace for all employees and take very seriously any questions about workplace culture. We are working with Ms. Union through her representatives to hear more about her concerns, following which we will take whatever next steps may be appropriate."

As a result of the claims, SAG-AFTRA has launched an investigation into the matter and, ET has learned, NBC, Fremantle and Syco are retaining outside counsel to assist them in learning more about the facts.