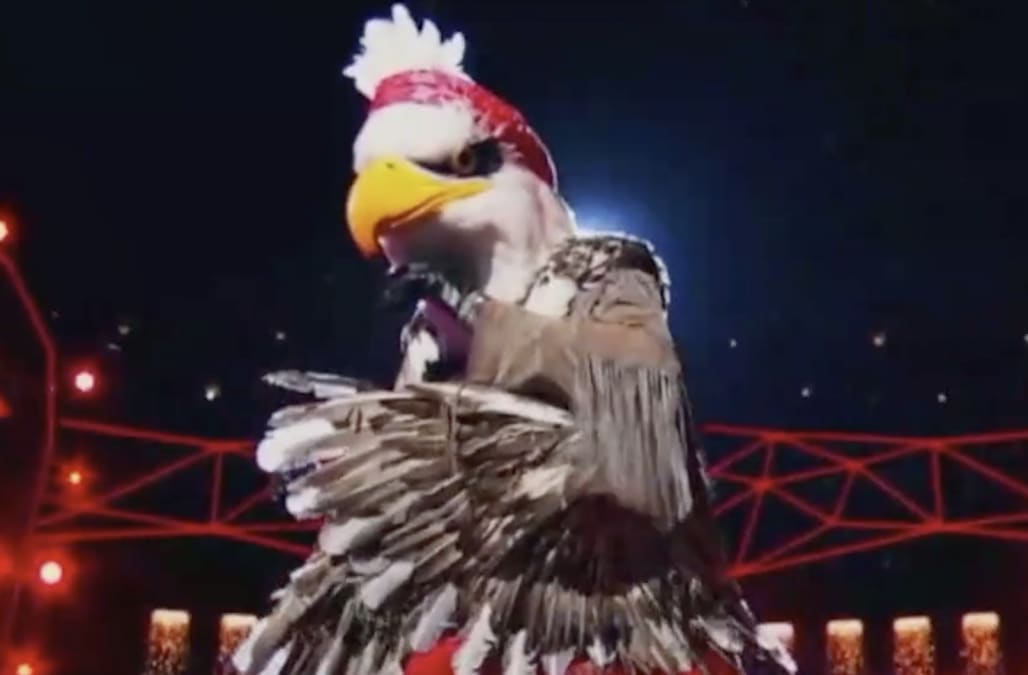 “Welcome back to the TV sensation that's all pleasure and absolutely no guilt, The Masked Singer!” host Nick Cannon announced Wednesday evening. Um, why should anyone ever feel guilty about watching THE BEST TELEVISION SHOW OF ALL TIME?

But I must say, I do feel a bit guilty that I didn’t recognize the star of two of my other favorite reality shows of the past, Celebrity Rehab and Loveline, under the Eagle’s magnificent plumage.

Most people think of addiction medicine specialist and relationship expert Dr. Drew Pinksy as television’s mild-mannered voice of reason, but disguised as the Eagle this Wednesday, he really let his inner rock star take flight.

Doing his smarmiest karaoke-crooner renditions of Meat Loaf’s “I Would Do Anything for love (But I Won’t Do That)” and Nancy Sinatra’s “These Boots Are Made for Walking” in full hippie/biker regalia, Drew was clearly feeling his rock ‘n’ roll fantasy. Was this Freedom Rock? Well, turn it up, man! And that he did.

No one guessed correctly

“I'm gonna prove I don't just hang out with rock stars. I am one,” this whirly-bird declared as he spread his bespoke wings, referring to the numerous rockers who’ve entered Celebrity Rehab or guested the syndicated radio version of Loveline over the years. Well, the Eagle didn’t quite land all the notes, but his swagger had the judges guessing he was Kid Rock or Bret Michaels (the red bandana threw them off, I guess). I actually thought he sounded a bit like that bonkers new wave album that David Hasselhoff just dropped.

The judges also thought it the Eagle might be Jimmy Fallon, Jeff Goldblum, Jeff Foxworthy, Craig Ferguson, Jay Mohr, Pauly Shore, or even Howard Stern - which shows you just how much feather-ruffling attitude Dr. Drew had going on. But no one guessed correctly; the closest the judges got was Adam Carolla, Drew’s former Loveline cohost, even though judge Ken Jeong used to fill in for Drew on Loveline.

Now, normally Ken is the worst guesser on the Masked Singer panel anyway, but this character was a true mystery, probably the most surprising reveal of the series yet.

So, the Eagle had to leave the Masked Singer nest this week, but three other celebrity cosplayers flew to the next round.

More from Yahoo Entertainment Video:
Gwen Stefani and Blake Shelton are still fighting: 'I thought you loved me!'
Jennifer Aniston met with Lorne Michaels about joining ‘SNL’ cast, but she says it was ‘too much of a boys’ club’
Wendy Williams snaps at audience member whose phone rang: ‘Get out!’