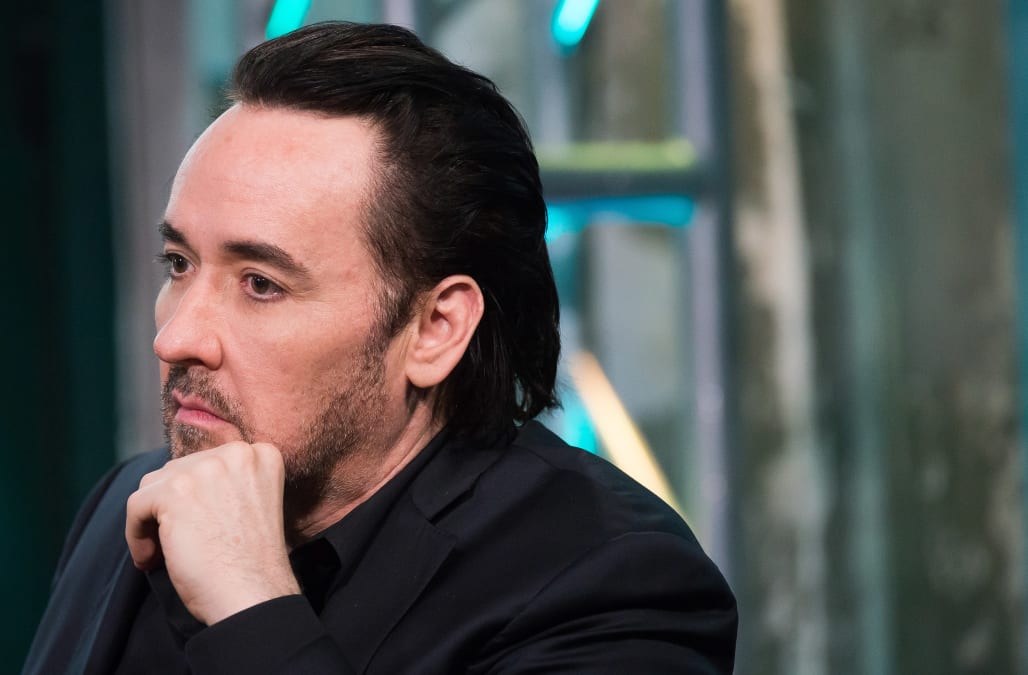 John Cusack sparked outcry Monday night after retweeting an inflammatory image that has been slammed as anti-Semitic.

The 52-year-old actor, who frequently posts about politics and social issues on his Twitter account, retweeted an image of a sleeve stamped with a Star of David, the hand jutting from it crushing a mass of people. Next to the image is the quote “To learn who rules over you, simply find out who you are not allowed to criticize,” which, despite being mistakenly attributed to the philosopher Voltaire, is actually based on the writings of white nationalist Kevin Strom.

When critics slammed the “disgusting’ tweet as anti-Semitic, Cusack insisted that he was speaking out against what he called Israel’s “state violence” against Palestinians, rather than criticizing those of the Jewish faith. He did acknowledge that the tweet, which he deleted, included an “alt-right” image. In another now-deleted tweet, he said that a “bot got me.”

recognize Palestinian are forced to live in an open air prison. That’s not anti semetic to say that - that recognizes their plight as part of the fight for justice

Yes -if image wasPalestinians being squashed- it would have been ok - but Israel gov doesn’t speak for all of Jewish faith any more the us gov under trump speaks for Christians. RT #Palestine#Freedom#FreePalestine

Don't ignore it. Talk about it. https://t.co/fqeMoYrQUO

“I’m anti fascist-in every respect,” he added in response to the uproar.

The Say Anything star’s explanation and blame on an alt-right bot did little to abate critics, who called on him to apologize. One commenter dubbed him the “thinking man’s Scott Baio” — a reference to the conservative ‘80s star — while Sen. Ted Cruz compared Cusack to Rep. Ilhan Omar, who was accused of an anti-Semitic tweet earlier this year.

2. A bot got you? You defended your posting of it in several quote tweets before you deleted.

Also why do your tweets look like you’re tweeting from 10 years ago. Use the twitter app dude. https://t.co/JGt0ubqYOg

This is open, violent anti-semitism in mainstream American life. This a threat to Jews of course, but also to American Democracy. A simple apology and pivot to Israel is not enough. You owe us a real apology and action to make amends @johncusackhttps://t.co/IzAcLa19I8

The fact that in 2019 a celebrity can openly share anti-Jewish stuff like this and genuinely think it's politically OK tells you a lot about why Israel became necessary and remains so. pic.twitter.com/2Qaqb21w9x

Antisemitism is a virus that is sadly very easy to catch. https://t.co/gKskOjKa3E

John Cusack says he didn't at first realise that the image was anti-Semitic. My, it's a troublesome old blind spot for progressives, isn't it? https://t.co/Cnn7DHGC7y

Yeah, an antisemitic bot gets all of the anti-Israel and anti-Zionist crowd... @johncusackpic.twitter.com/fXdXPi7Uje

Is John Cusack one of the freshmen trio of Dem women? I’m sensing a pattern.... https://t.co/NLAC4pFiZW

The backlash prompted Cusack to backtrack and express regret for the anti-Semitic messaging.

"It's clear that even if it was Israel's flag and even if you don't have an anti-Semitic bone in your body, it is still an anti-Semitic cartoon," Cusack tweeted. "Because it deploys anti-Jewish stereotypes in its attacks on Israel, even if those critiques about state violence are legit I mistakenly ... retweeted an alt-right account I thought was agreeing with the horrible bombing of a hospital in Palestine.

"In reaction to Palestinian human rights under Israeli occupation, an issue that concerns anyone fighting for justice, I retweeted and quickly deleted an image that’s harmful to both Jewish and Palestinian friends, and for that I’m sorry," he continued.

"The image depicted a blue Star of David, which I associated with Israel as their flag uses the same color and shape. I know the star itself is deeply meaningful to Jews no matter where they stand on Israel’s attacks on Palestinians. The use of the star, even if it depicts the state of Israel — committing human rights violations — when combined with anti-Jewish tropes about power — is anti-Semitic and anti-Semitism has no place in any rational political dialogue. To justify it would be as bad as conflating the cross with U.S. flag when confronting U.S. atrocities. So I get why it was a careless dumb thing to retweet."

Our brother John Cusack made a mistake that included antisemitism.

His tweets are a little messy so I pasted them into one statement here.

Thank you @johncusack for the apology. Yes antisemitism has no place in dialog.

“While I won’t take guff from anyone looking to score cheap shots on a careless mistweet, [it’s] good to use my mistake to spread awareness,” he added. “Solidarity and peace to all.”

The actor also cited his support of Sen. Bernie Sanders, who is Jewish — though that had commenters accusing him of “tokenism.” One told Cusack to “put down the phone and walk away, John.”

:) RT @mutehornsection: @babyfacedmoron @johncusack@heykim Right. He's so antisemitic that he wants a Jewish person to be president. Feel the antisemitism!