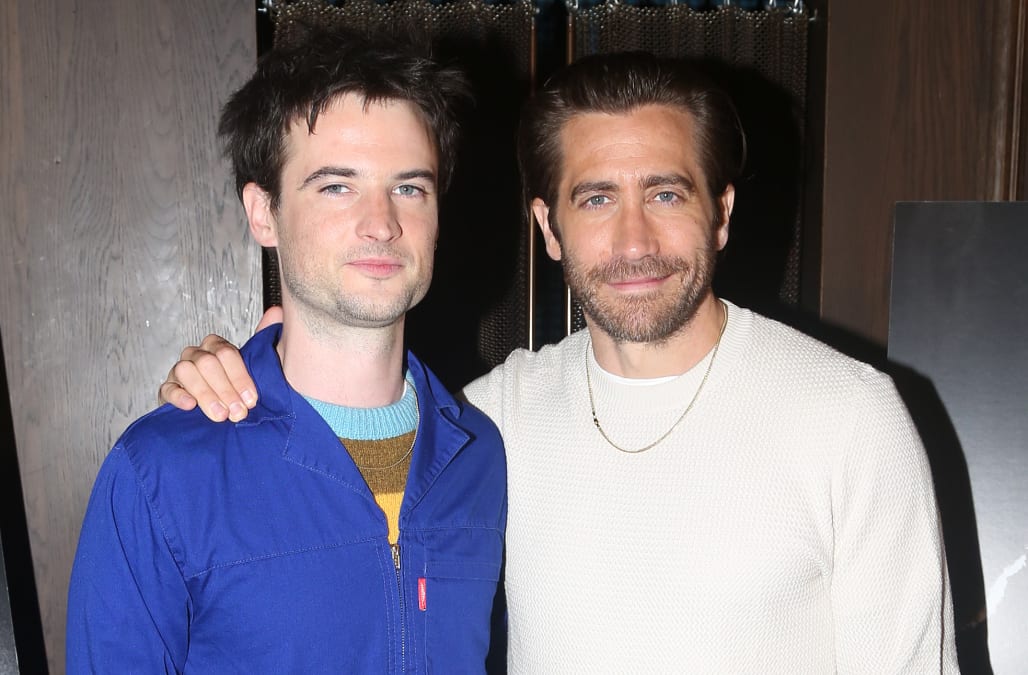 Jake Gyllenhaal and Tom Sturridge are coming back to Broadway.

Following a sold-out run at the Public Theater for "Sea Wall/A Life," the two-monologue play will embark on a nine-week Broadway run at the Hudson Theatre.

The limited engagement at the Hudson represents somewhat of a fateful return for the actors, both of whom performed in Broadway shows at the famed theater in 2017: Gyllenhaal starred in "Sunday in the Park With George," while Sturridge followed him up alongside Olivide Wilde in "1984" at the venue.

"We both deeply love the Hudson, so it’s kind of amazing to be bringing it back there," Gyllenhaal told AOL's Gibson Johns during a recent sit-down interview.

Since its run at the Public, Gyllenhaal and Sturridge have been working with directtor Carrie Cracknell on "significant changes" to "Sea Wall/A Life," written by Simon Stephens and Nick Payne respectively, as they prepare to bring it to Broadway.

Read our full conversation with Jake Gyllenhaal and Tom Sturridge below, and watch a preview video of "Sea Wall/A Life," available to watch exclusively on AOL, at the top of the page.

"Sea Wall/A Life" is coming off a critically-acclaimed run at the Public Theater earlier this year. What changes will have happened to the production between then and its Broadway run this summer?

Jake Gyllenhaal: There will be significant changes, because we realized that the audience really spoke to us throughout the process. The show didn’t come alive until we put it up in front of an audience -- we tried our hardest in rehearsal for three weeks to see what it would be like, but our first performances told us so much. It evolved and progressed from that, and I don’t think we ever could’ve ever expected the response that we got and the individual stories that came to us through the stories that we told, and we encouraged that. In the encouragement of that, we realized that the show is about the in-between, so visually, for [it's about] those transitions we make in our lives. Carrie is devising a lot of really incredible ideas on how to visualize transition in a different ways than we usually see on the stage, so that’s what will happen. It was a joke when we did an interview with the New York Times where I said that there will be confetti and dancing, but we have not ruled those out. [Laughs]

Jake, I saw you in "Sunday in the Park With George" in 2017 and, Tom, you were in "1984" later that same year. How do past theater experiences inform your future work on stage?

Tom Sturridge: "1984" was interesting because there were moments where the house lights went up, and the audience was acknowledged by the characters on stage and spoken to and, therefore, became complicit in the experience of the evening. That very much was a learning experience for this. It’s incredibly unusual in a theater to look in the eyes the people who you’re trying to entertain, and I think that the first few performances of this were, for me anyway, really difficult and really scary to try to confront that and start to build a relationship. But, what’s been so fulfilling, is once that relationship is built and you start to trust each other and acknowledge each other, then these evenings can be sort of magic.

Gyllenhaal: First of all, both of us performed those pieces at the Hudson Theatre and, actually, we did "Sunday in the Park" right before they did "1984." So, we were subsequent productions and, with the irony being that we’re coming together and we both deeply love the Hudson, so it’s kind of amazing to be bringing it back there. For me, I’ve learned how much love there is when people decide to come to the theater and that the love of the theater is a very particular kind of thing. It's the love for that live experience. It’s a commitment, and I consider it to be an honor every night when I get out there to perform for a large group of people who have gathered and paid for that specific thing. It’s something you don’t get when you do television or film. You never really feel that feeling, and I think that anticipation moved us into realizing how much we appreciate and love the audience that comes together. This show -- these two pieces -- acknowledge that love and that we are all together, in a way that most shows don’t.

"Sea Wall/A Life" is two totally separate stories in one play. How do they intertwine thematically? How do you work together in crafting this one experience?

Gyllenhaal: The show is an event, and it’s an event because both pieces talk about love and grief and the mess of life and the comedy of life, and it asks the big questions. They ask it to the audience nightly in a different way depending on what the audience comes in with. There are themes throughout both pieces - fatherhood, my character in particular, Abe, is a musician and he’s about to expect his first child and the expectation of that child sort of sends him back into al these memories, memories of his own upbringing, memories of his father, his mother, getting married, the first time he fell in love … all of those things come into play in this one moment. So, it’s the same with “Sea Wall,” in a different way, but that is the show: it’s about all of our collective experiences in this time of isolation, really, for a lot of us.

Sturridge: I think what connects them is that, both writers are inherently optimistic writers. To be a responsible optimist, you have to acknowledge the reality of the world, which means its savagery and its brutality, but you have to defy it. What’s extraordinary about these plays is that they do explore things that are complicated and difficult in moments, but they defy them with beauty.

Sturridge: But that’s how you defy it! Losing anything only means something when you’ve had something so astonishing.

Gyllenhaal: Also, I think they say that, no matter what -- whether it’s in this lifetime or the next lifetime, this moment or the next moment -- joy is always there and always graspable and inevitable. That’s why we keep coming back to it.

Sturridge: It really is an uplifting evening, I truly believe that.

More from Aol.com:
Lee Daniels ‘beyond embarrassed’ by Jussie Smollett scandal: ‘It was a flood of pain’
Meghan McCain disses Gwyneth Paltrow’s part-time living arrangements with husband
Courteney Cox and daughter Coco Arquette are totally twinning in this new side-by-side