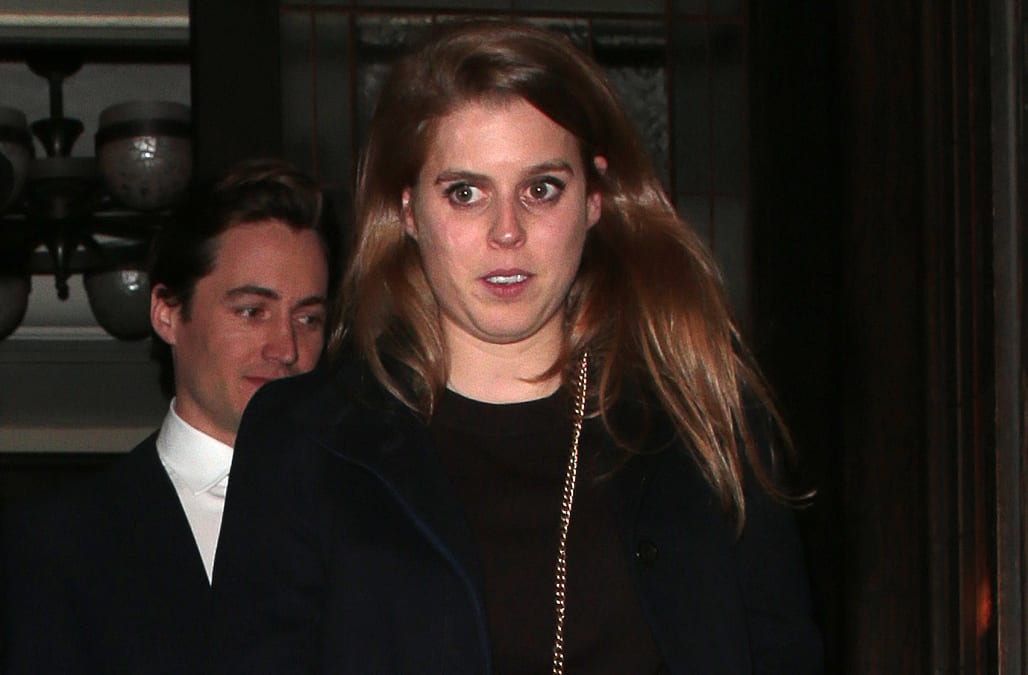 Princess Beatrice is slowly getting more and more public with her new boyfriend.

The British royal was spotted out this week with her millionaire man, Edoardo Mapelli Mozzi, in London this week. The couple reportedly met last fall and have been moving "quickly" together.

Also out this week was Katie Holmes, who took daughter, Suri Cruise, out to dinner in New York City with some of her pals for her 13th birthday. Matthew McConaughey was also seen with one of his kids, son, Levi, 10, while leaving their hotel in downtown New York.

Other celebs who were photographed this week? Tucker Carlson, who stepped out with his wife, David Burtka as he celebrated his new cookbook with Capital One's Savor card, Bethenny Frankel at the Godiva Café opening, Justin Theroux getting a boxing workout in and Priyanka Chopra rocking a variety of colorful fashions in NYC.

Matthew McConaughey, wearing Privé Revaux's The Maestro sunglasses, and his son, Levi, 10, were photographed leaving their hotel in TriBeCa on Thursday.

Princess Beatrice of York and boyfriend Edoardo Mapelli Mozzi made a rare public appearance together while leaving 34 in London on Monday.

Katie Holmes took her daughter, Suri, and her friends out to dinner in SoHo on Thursday night for Suri's 13th birthday.

Anne Hathaway stunned for her appearance at BBC Radio 2 on Wednesday in London.

Rachel Brosnahan and Alex Borstein were spotted on the set of "The Marvelous Mrs. Maisel" in New York City on Wednesday.

Kate Beckinsale was all smiles in a silk black-and-white ensemble while stepping out in Manhattan on Wednesday.

Bethenny Frankel stepped out for the opening of the Godiva Café in Midtown on Wednesday night.

David Burtka and husband Neil Patrick Harris celebrated the launch of Burkta's "Life Is a Party" cookbook with the Capital One Savor® credit card in New York.

"Modern Family" star Ariel Winter checked her phone as she headed to a workout in Los Angeles on Monday.

Antonio Banderas and girlfriend Nicole Kimpel were photographed getting cozy in Malaga, Spain on Tuesday.

Fox News host Tucker Carlson made a rare public appearance with his wife, Susie, at Craig's in West Hollywood on Tuesday night.

Jennifer Lopez was seen FaceTiming while on the set of "Hustlers" in New York City on Thursday.

Justin Theroux was spotted during a boxing workout in New York City on Tuesday.

Diane Kruger was spotted out and about in a skin-baring dress in New York City on Thursday.

Priyanka Chopra looked fashionable as she stepped out in New York City on Tuesday.

Nicky Hilton Rothschild was spotted on a phone call while carrying an Hermes Birkin bag in New York City on Tuesday.

Mariska Hargitay and Nazanin Boniadi were spotted on the set of "Law & Order SVU" in New York City on Monday.

Pregnant Kate Mara was spotted walking around Los Angeles on Monday with an iced coffee.

Reese Witherspoon chatted on the phone using her AirPods while running errands in Los Angeles on Monday.

Priyanka Chopra stepped out in a multi-colored plaid topcoat in New York City on Monday.

See more celebrities that have been rocking Uggs!

Uma Thurman waved to photographers while leaving the BUILD Series studio on Thursday.

Keke Palmer posed in her patterned leather bodysuit outside of the "Good Morning America" studio in Times Square on Thursday.

Kristin Cavallari was all smiles while walking into the "Good Morning America" studio in New York City on Monday.

Anne Hathaway waved to fans while leaving the Corinthia Hotel in London on Thursday.

Former "Bachelor" star Nick Viall flashed a soft smile while out and about in Los Angeles on Wednesday.

Gina Rodriguez was all smiles in a floral dress on the set of "Jimmy Kimmel Live!" on Wednesday.

Olivia Munn posed for paparazzi while heading to an event in New York City on Wednesday.

Dennis Quaid looked sexy in a leather jacket as he waved to fans on the set of "Extra" on Wednesday.

Justin Theroux was photographed biking around New York City on Tuesday in an all-black ensemble.

"DWTS" couple Maksim Chmerkovskiy and Peta Murgatroyd were photographed at an event together in Los Angeles on Tuesday evening.

Nicole Richie was spotted leaving a workout in Los Angeles on Tuesday.

Will Arnett was photographed out in Los Angeles on Monday night.

More from Aol.com:
Mary-Kate and Ashley Olsen take rare public outing together: See the pics!
Barbara Palvin got her Angel wings, and this is the next goal she's trying to conquer
Our favorite Instagram style moments in honor of Kourtney Kardashian's birthday