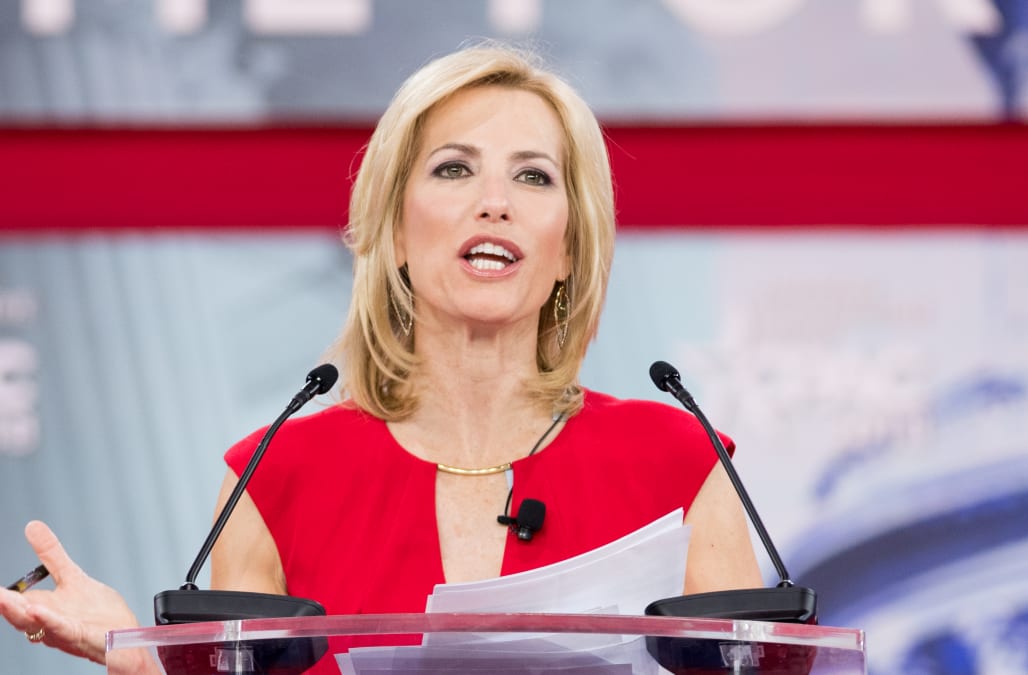 Laura Ingraham is the latest Fox News host facing public outcry and boycotts, this time over her coverage of slain rapper Nipsey Hussle's memorial service, which many considered disrespectful and insulting.

During Friday's episode of her show, The Ingraham Angle, the 55-year-old conservative TV personality reported on the massive memorial service honoring Hussle, who was fatally shot outside his store in Los Angeles late last month.

During her broadcast, Ingraham laughed and made sarcastic remarks about the song "FDT," or "F**k Donald Trump," which she wrongly attributed to Hussle. While Hussle does feature on the track, the song was released on rapper YG's 2016 album Still Brazy.

“Yesterday in L.A., thousands lined the streets to say goodbye to rapper Nipsey Hussle,” a broadly grinning Ingraham reported, before pedantically dissecting the lyrics with her guest, journalist Raymond Arroyo.

Ingraham also played a segment from the song's music video with the implication that it was of Hussle, when in fact the clip only showed YG performing. (It wouldn't be the first time this year that a Fox News personality got one black celebrity confused with another. Jesse Watters found himself in hot water back in early March when he mistakenly confused Gayle King for Robin Roberts.)

Laura Ingraham attacks Nipsey Hussle, who was murdered less than two weeks ago, for being on the track FDT then plays a clip of YG rapping the chorus pic.twitter.com/9YdnrIJ58v

Following Ingraham's light-hearted coverage of a murdered artist's memorial service, fans of Hussle took offense and a campaign began calling for her termination from the network.

The Game, a close friend of the late rapper, was one of several prominent music figures to took to social media and demand Ingraham be held accountable for her behavior.

"So lemme tell you what’s going to happen here.... @foxnews fires this disrespectful c**t by tomorrow, Monday morning or you will lose millions of viewers one person at a time until it drastically effects your ratings, views etc…" the rapper wrote on Instagram, alongside a video of the episode.

"If our demographic doesn’t effect that we will STOP support of ALL SPONSORS immediately !!! We are NO LONGER laying quiet while you continuously disrespect our brother, culture African Americans as a whole. I will use my platform & call on my peers to do the same," he continued. "Nips passing nor his legacy is to be taken lightly as there will be consequences for any disrespect now or in the future as long as I have a voice !!!... DO NOT LET THIS SLIDE MY PEOPLE. I know you can feel the energy NIP left all of us.. I know you feel it !!!!!"

A number of other big name rappers -- including TI, Snoop Dogg and several other stars who spoke and shared memories during Hussle's enormous Celebration of Life tribute at the Staples Center last Thursday -- joined in on the boycott, threatening to stop support for Ingraham's sponsors if Fox Next doesn't fire her.

Additionally, a petition seeking Ingraham's termination began circulating and, as of Monday evening, has over 29,000 signatures.

This is the latest in a number of controversies and outcries Ingraham has sparked over the past year. In 2018, Ingraham drew heat for telling LeBron James to "shut up and dribble" after the NBA star expressed criticism for President Donald Trump.

Additionally, Ingraham infamously compared the detention facilities where migrant children are being held after getting separated from their families to "summer camps" and was forced to apologize after mocking David Hogg -- a survivor of the 2018 mass shooting at Stoneman Douglas High School and vocal gun control advocate -- for not getting accepted into a college that he applied to.

Stars react to Nipsey Hussle's death
Fuck. My whole energy is just at a low right now hearing this. We just linked for the first time in years and said we were gonna do a new song this summer cause it had been too long. You were having the best run and I was so happy watching from distance fam nobody ever talks down on your name you were a real one to your people and to the rest of us. I’m only doing this here cause I want the world to know I saw you as a man of respect and a don. Rest easy my g.
This doesn’t make any sense! My spirit is shaken by this! Dear God may His spirit Rest In Peace and May You grant divine comfort to all his loved ones! 💔🙏🏿 I’m so sorry this happened to you @nipseyhussle
RIP Nipsey. I just spent Thursday with him filming a video for a beautiful new song we created with Khaled. We fi… https://t.co/Sn5ejtJscL
Kim Kardashian
Watching Nipsey inspired me to invest and own in our communities. He was a solid man who loved his woman, his famil… https://t.co/DndFHQfzgd
Just spoke to you, always kept it 1000. Always was real. You’re a 🐐 Rest up young KING. RIP Nipsey
😥😥😥😥😥😥‼️‼️‼️‼️ So so SAD man!! DAMN man this hurt.
Gone 2 soon @nipseyhussle I’m so sad right now I’ll just reflect on the good times we had 💙🙏🏽
RIP @NipseyHussle. Madness and Sadness.
I’ll remember him this way. Bright, genuine, forward thinking. I’ll remember the beauty that he saw in our commun… https://t.co/7uWPVUZywI
Rolled down my window 12 years ago on Crenshaw & Slauson as you handed me your demo & said “Chuck, don’t frisbee my shit homie... give a young nigga a ear”. From that day to letting you open up for me on tour & us going around the world together, creating a bond & watching your growth to today...... Murdered my friend in front of his own store on a Sunday at that !!! After just talking to you on the phone just last night about the Dr. Sebi documentary, family, the kids & how we were both bout to f&$k the summer up with this music, the world loses a true king. A man that was truly about everything he spoke & stood up for all that he believed in. I keep seeing your name in these headlines bro, but it seems unreal to me.... like, I just cannot believe you gone !!!! I love you..... I’m really broken & saddened by the fact they did this to you SMMFH !!!!! I can only imagine what your family is going through right now... This was not how your life on earth was supposed to end !!!!!!!! They don’t even make friends like you no more...... @nipseyhussle 🙏🏾 & in LA, at his own store ?!?!? A store & business he put there for his people ?!?!? Los Angeles, how we let this happen ?!?!?!?!? I’m ashamed of you right now !!!!! Can’t even live out ya whole life in this city no more... this shit right here is just krazy to me !!!!!!!!!!!! #RestInPeaceNip can’t even fuckin believe it’s actually your name attached to all these REST IN PEACE posts !!!!! SMFH
Broke me.... we really fighting for our lives against our own kind and really have to take risk and match the level… https://t.co/QkjHCIvKs3
Real one after real one smh R.I.P Nipsey the solid morals you stood on and your legacy will last 4L!!
You were about something..positive and for your community in every chance you had to speak..and because of that You… https://t.co/jvaA0r3dV3
I’m truly hurt this was one of the good guys ! Sending blessings and love to his family 🙏🏽
Prayers up for @NipseyHussle
God please cover and restore @NipseyHussle right now!!! 🙏🏽🙏🏽
Thoughts and prayers for @NipseyHussle https://t.co/z00gcByHmE
💔
heartbroken and speechless god bless your beautiful family just spoke about working... a community legend. a humb… https://t.co/ugAQWAMf1f
my heart is heavy right now. rest in peace nipsey 💔
God just lost a Son, a son just lost his father, a family just lost their king & hip hop just lost one of their elite. One of the Greatest overall MEN I’ve ever encountered in my life. He was always Leading by example by rebuilding his community. The entire Hip hop community and the World 🌎 is Numb. 🙏🏽🙏🏽
Praying for my boy right now.shit crazy. You’ve come to far for the mission to be stopped .God watch over this brave leader. 🙏🏾🙏🏾🙏🏾🙏🏾🙏🏾🙏🏾🙏🏾🙏🏾🙏🏾🙏🏾🙏🏾🙏🏾#prayfornipsey😥💔
God damn man....Real emotions and feelings rights now. Fuck man...u have always been a good dude...I’m so sorry...R… https://t.co/hoX7jzXCkv
prayers up for nipsey x his family 🙏🏽😔❤️
This one hurts man... Lauren I am so so so sorry!!! RIP Nipsey 🙏🏽
RIP NIPSEY HUSSLE
This is so painful! @NipseyHussle was doing great work for the people. Keep his legacy alive by carrying on his wor… https://t.co/mdz3Xn0Kg3
Rest in Love Nipsey. I am an admirer of your wisdom which will now be part of your legacy. My heart bleeds for all those who love him. Stay strong @laurenlondon. He’s an angel on your shoulder now. ❤️
Our hearts are with the loved ones of Nipsey Hussle and everyone touched by this awful tragedy. L.A. is hurt deeply… https://t.co/gysoUZWtMH
Up Next

More from ET Online:
Hoda Kotb gives her week one review of Jenna Bush Hager on 'Today': 'I dig her vibe'
Prince Harry is teaming up with Oprah Winfrey for a mental health series on Apple
Ryan Seacrest takes first sick day in 17 seasons of 'American Idol' and gets some love from his co-stars