'Game of Thrones' season 8: Breaking down the biggest fan theories 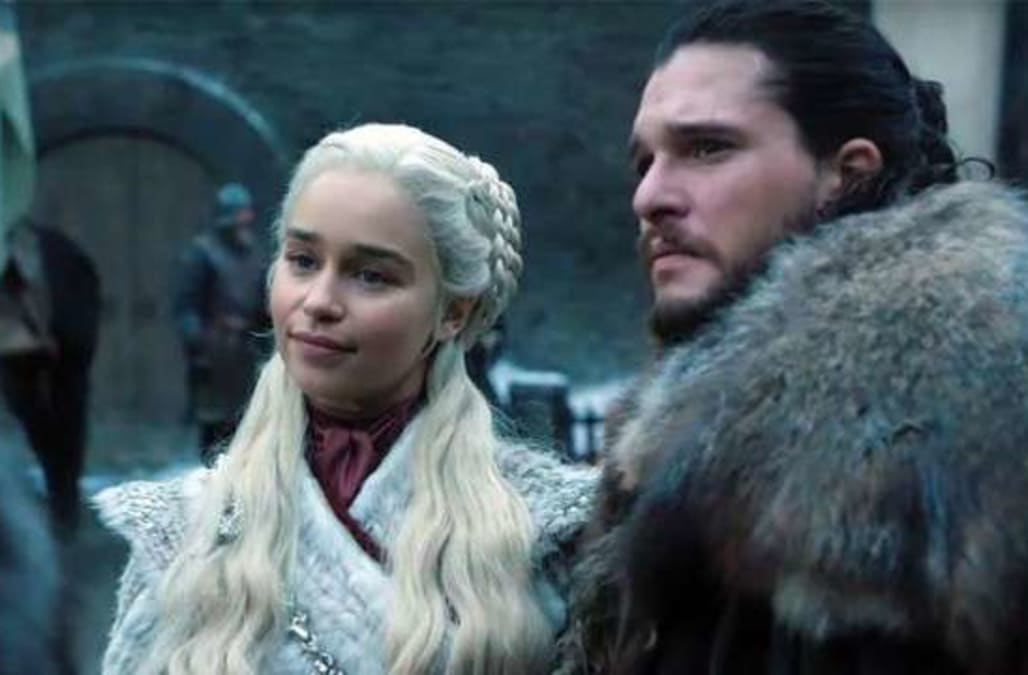 The final episodes of Game of Thrones are almost here, but before the eighth season of the epic fantasy series kicks off, ET is rounding up some of the most popular fan theories and kicking off our latest series, Theories and Thrones. Stay tuned for recaps and reactions following each season 8 episode, and read on for more on what could possibly be around the corner as winter arrives across the seven kingdoms.

From the birth of a true Targaryen heir to the return of a fan-favorite character -- with a newly undead persona -- check out some of the biggest and most interesting fan theories about Game of Thrones season 8:

Theory #1: Jon and Daenerys will have a baby.

Perhaps the closest thing Game of Thrones fans have to a sure thing in season 8 is the arrival of the pseudo-incestuous offspring of Jon Snow and Daenerys Targaryen. The pair finally hooked up at the end of season 7 -- and the mood was only slightly dampened by intercutting flashbacks that revealed Jon was actually Dany's nephew. Hints that the Mother of Dragons might not be quite so barren as the maegi Mirri Maz Duur once told her were also prominent throughout the last few episodes, leading many to believe that she will eventually end up bearing a human child as well.

But of course, the arrival of a true Targaryen heir will spawn more questions than answers. Will he or she ultimately take the Iron Throne? Will the union lead to the downfall of two great houses? Only time will tell.

The second-closest thing to a sure thing we've got coming in season 8 is the fulfillment of the rest of the prophecy delivered to Cersei Lannister by a woods witch, Maggy the Frog, which fans saw via flashback in season 5. In the books, the witch not only predicts the tragic fates of Cersei's three children -- which have already come true -- she also warns that the queen-to-be will ultimately be killed by the "valonqar," which is High Valyrian for "little brother." This prophecy is partially what has fueled Cersei's hatred and mistrust of younger brother Tyrion, but what if it was actually about Jaime instead? The pair are twins, but Cersei was born first, making Jaime her younger brother as well. Will the Kingslayer ultimately become the Sisterslayer?

(A related theory circulating among fans is that Arya will kill Cersei while wearing Jaime's face. It wouldn't fulfill the prophecy, per se, but it would be epic. A girl can dream.)

Everyone loves a redemption arc, and hopefully that includes even the stone-hearted GoT producers and creators. Jaime's title as "Kingslayer" has been used to deride him throughout the series, thrown in his face as a reminder of his treasonous actions in the murder of King Aerys. But what if that title comes full-circle at the end, and Jaime is the one to defeat the encroaching evil? He is headed north with a sword made of Valyrian steel, after all.

Theory #4: Tyrion is the third Targaryen.

"A Targaryen alone in the world is a terrible thing." GoT fans now know there are two, but what if there are actually three Targaryens remaining in the seven kingdoms? (Apart from the anticipated incest baby, of course.) In the books, Dany is told through a vision that "the dragon has three heads," and Tyrion has always been the outcast of the Lannister family, with a mysterious connection to Dany's winged "children." Does he share more with the Mother of Dragons than a simple allegiance?

Another questionable line of parentage in the GoT canon leads to everyone's favorite boat-rowing, marathon-running bastard, Gendry. Fans know that Gendry is the son of the late king Robert Baratheon, but he only remembers his mother as having "yellow hair" and dying when he was young. Meanwhile, Cersei has spoken about losing her first son, "a little black-haired beauty." Many GoT fans have connected these dots to speculate that Gendry may actually be the legitimate son of King Robert and his queen, which could potentially make him an even more legitimate heir to the Iron Throne than any other character in the seven kingdoms.

Theory #6: Either Jon or Dany will have to sacrifice the other.

This theory comes from the prophecy of Azor Ahai, which is the book's tale of a legendary hero who forged an unstoppable sword, Lightbringer, and saved the world from darkness -- but only after plunging the weapon into the heart of his wife, Nissa Nissa. There are several fan theories that connect our current heroes to the legendary warrior, but it seems unlikely that both Jon and Dany will survive to see the end of GoT's epic saga -- perhaps one or the other will have to make a heartbreaking sacrifice for the good of the world.

After all Arya Stark has been through in GoT's first seven seasons, it takes a lot to frighten her. So what could possibly explain the look of terror on her face as she runs through the crypts of Winterfell, as seen in the season 8 trailer? One theory posits the Night King reanimating one or many of the family's dead, who are buried beneath the castle -- and the most likely candidate is matriarch Catelyn Stark, who appears in the books as the undead Lady Stoneheart.

Theory #8: The Night King isn't so evil after all.

While many fans have latched on to the popular theory that Bran is actually the Night King, a more interesting line of exploration has been raised into the actual motivations of the stoic leader of the White Walkers. George R. R. Martin has spoken in the past about not wanting the series' perceived villains to be quite so black-and-white in terms of their motivations. Is it possible that the Walkers aren't interested in conquering at all, and are instead traveling south to seek vengeance against their creators, the Children of the Forest?