Nipsey Hussle dead at 33: Stars react to his tragic killing 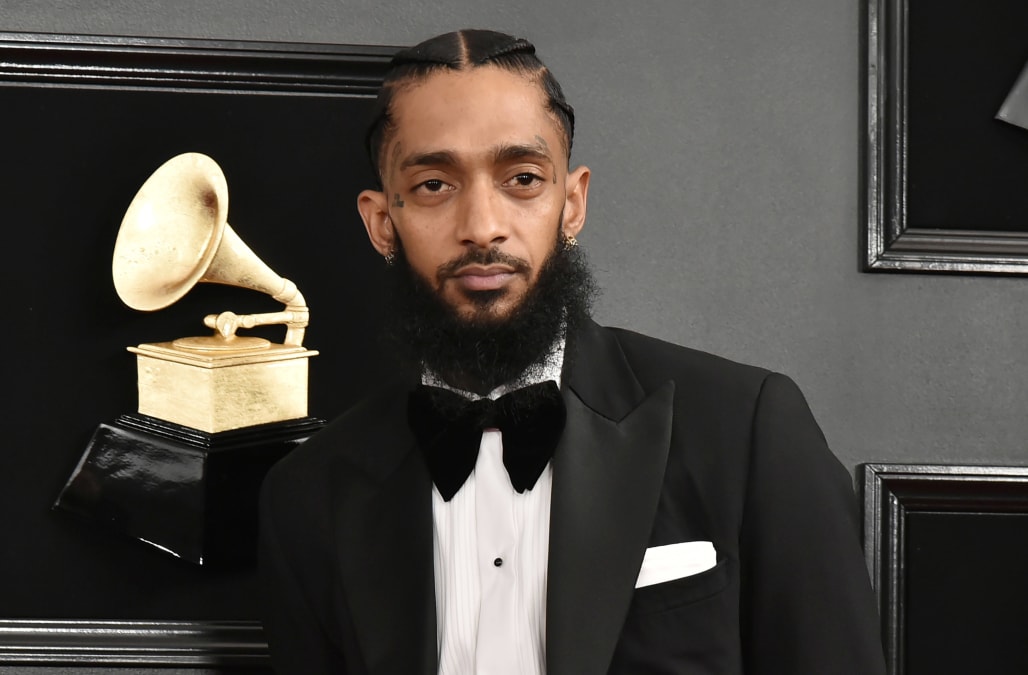 Nipsey Hussle has died at the age of 33.

The celebrated rapper was shot multiple times outside of his store, Marathon Clothing Company, in Hyde Park, Los Angeles, on Sunday and was later pronounced dead after being transported to a local hospital.

Following the news of his tragic killing, the beloved artist's famous friends, collaborators and peers took to social media to honor a life taken too soon.

See how stars paid tribute to Nipsey Hussle after his death below:

Stars react to Nipsey Hussle's death
Fuck. My whole energy is just at a low right now hearing this. We just linked for the first time in years and said we were gonna do a new song this summer cause it had been too long. You were having the best run and I was so happy watching from distance fam nobody ever talks down on your name you were a real one to your people and to the rest of us. I’m only doing this here cause I want the world to know I saw you as a man of respect and a don. Rest easy my g.
This doesn’t make any sense! My spirit is shaken by this! Dear God may His spirit Rest In Peace and May You grant divine comfort to all his loved ones! 💔🙏🏿 I’m so sorry this happened to you @nipseyhussle
RIP Nipsey. I just spent Thursday with him filming a video for a beautiful new song we created with Khaled. We fi… https://t.co/Sn5ejtJscL
Kim Kardashian
Watching Nipsey inspired me to invest and own in our communities. He was a solid man who loved his woman, his famil… https://t.co/DndFHQfzgd
Just spoke to you, always kept it 1000. Always was real. You’re a 🐐 Rest up young KING. RIP Nipsey
😥😥😥😥😥😥‼️‼️‼️‼️ So so SAD man!! DAMN man this hurt.
Gone 2 soon @nipseyhussle I’m so sad right now I’ll just reflect on the good times we had 💙🙏🏽
RIP @NipseyHussle. Madness and Sadness.
I’ll remember him this way. Bright, genuine, forward thinking. I’ll remember the beauty that he saw in our commun… https://t.co/7uWPVUZywI
Rolled down my window 12 years ago on Crenshaw & Slauson as you handed me your demo & said “Chuck, don’t frisbee my shit homie... give a young nigga a ear”. From that day to letting you open up for me on tour & us going around the world together, creating a bond & watching your growth to today...... Murdered my friend in front of his own store on a Sunday at that !!! After just talking to you on the phone just last night about the Dr. Sebi documentary, family, the kids & how we were both bout to f&$k the summer up with this music, the world loses a true king. A man that was truly about everything he spoke & stood up for all that he believed in. I keep seeing your name in these headlines bro, but it seems unreal to me.... like, I just cannot believe you gone !!!! I love you..... I’m really broken & saddened by the fact they did this to you SMMFH !!!!! I can only imagine what your family is going through right now... This was not how your life on earth was supposed to end !!!!!!!! They don’t even make friends like you no more...... @nipseyhussle 🙏🏾 & in LA, at his own store ?!?!? A store & business he put there for his people ?!?!? Los Angeles, how we let this happen ?!?!?!?!? I’m ashamed of you right now !!!!! Can’t even live out ya whole life in this city no more... this shit right here is just krazy to me !!!!!!!!!!!! #RestInPeaceNip can’t even fuckin believe it’s actually your name attached to all these REST IN PEACE posts !!!!! SMFH
Broke me.... we really fighting for our lives against our own kind and really have to take risk and match the level… https://t.co/QkjHCIvKs3
Real one after real one smh R.I.P Nipsey the solid morals you stood on and your legacy will last 4L!!
You were about something..positive and for your community in every chance you had to speak..and because of that You… https://t.co/jvaA0r3dV3
I’m truly hurt this was one of the good guys ! Sending blessings and love to his family 🙏🏽
Prayers up for @NipseyHussle
God please cover and restore @NipseyHussle right now!!! 🙏🏽🙏🏽
Thoughts and prayers for @NipseyHussle https://t.co/z00gcByHmE
💔
heartbroken and speechless god bless your beautiful family just spoke about working... a community legend. a humb… https://t.co/ugAQWAMf1f
my heart is heavy right now. rest in peace nipsey 💔
God just lost a Son, a son just lost his father, a family just lost their king & hip hop just lost one of their elite. One of the Greatest overall MEN I’ve ever encountered in my life. He was always Leading by example by rebuilding his community. The entire Hip hop community and the World 🌎 is Numb. 🙏🏽🙏🏽
Praying for my boy right now.shit crazy. You’ve come to far for the mission to be stopped .God watch over this brave leader. 🙏🏾🙏🏾🙏🏾🙏🏾🙏🏾🙏🏾🙏🏾🙏🏾🙏🏾🙏🏾🙏🏾🙏🏾#prayfornipsey😥💔
God damn man....Real emotions and feelings rights now. Fuck man...u have always been a good dude...I’m so sorry...R… https://t.co/hoX7jzXCkv
prayers up for nipsey x his family 🙏🏽😔❤️
This one hurts man... Lauren I am so so so sorry!!! RIP Nipsey 🙏🏽
RIP NIPSEY HUSSLE
This is so painful! @NipseyHussle was doing great work for the people. Keep his legacy alive by carrying on his wor… https://t.co/mdz3Xn0Kg3
Rest in Love Nipsey. I am an admirer of your wisdom which will now be part of your legacy. My heart bleeds for all those who love him. Stay strong @laurenlondon. He’s an angel on your shoulder now. ❤️
Our hearts are with the loved ones of Nipsey Hussle and everyone touched by this awful tragedy. L.A. is hurt deeply… https://t.co/gysoUZWtMH
Up Next

Also among the reactions to the crime was Mayor Eric Garcetti, who posted a heartfelt message on Twitter himself.

"Our hearts are with the loved ones of Nipsey Hussle and everyone touched by this awful tragedy," he wrote. "L.A. is hurt deeply each time a young life is lost to senseless gun violence. My Crisis Response Team is assisting the families coping with shock and grief."

Our hearts are with the loved ones of Nipsey Hussle and everyone touched by this awful tragedy. L.A. is hurt deeply each time a young life is lost to senseless gun violence. My Crisis Response Team is assisting the families coping with shock and grief.

Hours before his passing, Hussle tweeted, "Having strong enemies is a blessing." The tweet quickly went viral after his passing.

Having strong enemies is a blessing.

Nipsey Hussle is survived by two children that he shared with his longtime girlfriend, Lauren London.

See photos of Nipsey Hussle below: