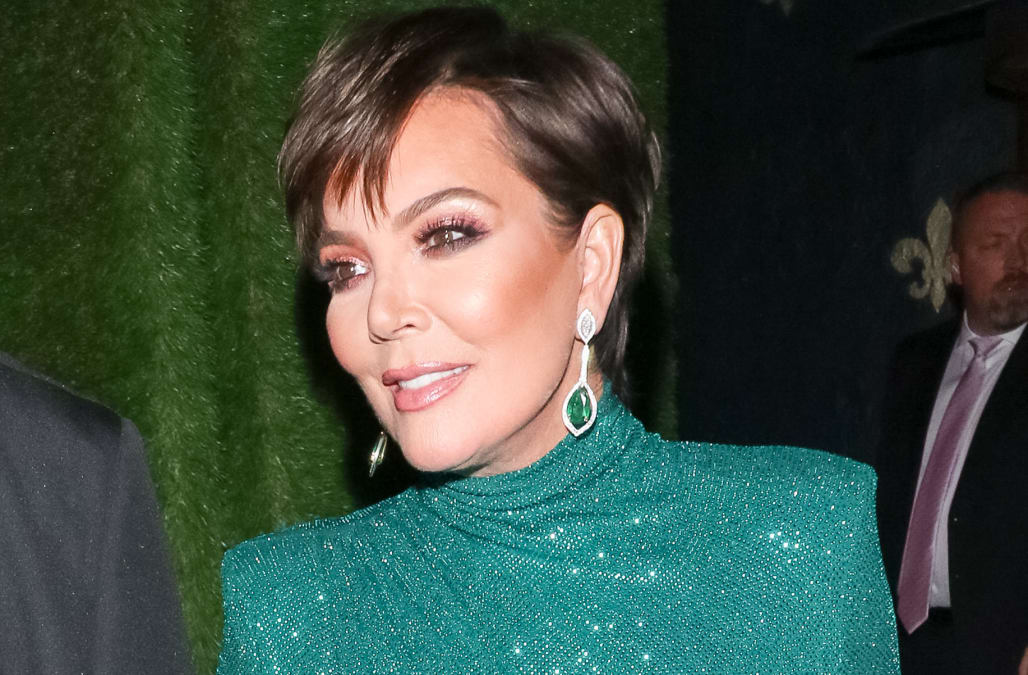 Staying strong for her family. Kris Jenner broke her silence on the recent cheating scandal that threw her famous brood for a major loop.

Jenner, 63, called into Ryan Seacrest’s radio show on Friday, March 29, and opened up about how she coped with finding out that Tristan Thompson cheated on Khloé Kardashian with Jordyn Woods. “First of all, I pray about it,” Jenner revealed on On Air With Ryan Seacrest. “I really do. I find that, you know, just the spiritual side of me has to kick in because otherwise, you know, I feel like I wouldn’t survive.”

The momager continued, “As challenging as some of these situations are, I think that because [my kids] have one another and they try to make really good decisions, that they’re gonna come out the other side with a lot of clarity and a lot of honesty and do what they feel like is the right thing. And I really trust all of my kids to make those good decisions.”

The In the Kitchen with Kris cookbook author also explained that having kids “really made such a difference, obviously, in all of their lives.”

While dealing with hardships in the public eye is difficult, Jenner admitted that it is comforting to know they are helping their fans by being open. “People watch the show and we remind them of things that their family might be going through, or things that they’re experiencing, or don’t want to talk about,” she noted. “And suddenly here it is, you know, right there for them to watch and see how we might handle it, or go through it, because it’s real. I think that some of the stuff that we’ve been able to show … has been really beneficial.”

A source told Us Weekly that Thompson, 28, was caught “making out” with Woods, 21, at a party in Los Angeles on February 17. Kardashian, 34, subsequently ended her relationship with the Cleveland Cavaliers player, who was previously caught cheating on her with multiple women in April 2018 when she was pregnant with their now-11-month-old daughter, True.

Woods later confirmed on an episode of Jada Pinkett Smith’s Red Table Talk that she and the NBA player kissed at the event, but she was “no passion” behind it. She also denied sleeping with him and said having sex was “never a consideration.”

A source previously told Us that Kardashian has been working hard to stay on good terms with Thompson so they can successfully coparent True, while another insider said Kylie Jenner, who was best friends with the model for many years, “doesn’t want to get involved” with the drama.

Khloe Kardashian and Tristan Thompson
We are ready whenever you are little mama 🦋
FBF to one of my favorite days with all of my favorite people... my surprise party 🎉 man, everyone was sooooo good at keeping that secret! Hrush, Jen and Tristan were so calm, cool and collected during glam 👀 I need to watch you sneaks lol That was such an epic night!
❥ Mom and Dad ❥
LOS ANGELES, CA - FEBRUARY 17: Tristan Thompson and Khloe Kardashian attend the Klutch Sports Group 'More Than A Game' Dinner Presented by Remy Martin at Beauty & Essex on February 17, 2018 in Los Angeles, California. (Photo by Jerritt Clark/Getty Images for Klutch Sports Group)
Mommy and Daddy 📸 @sashasamsonova
LOS ANGELES, CA - MARCH 10: Tristan Thompson and Khloe Kardashian pose for a photo as Remy Martin celebrates Tristan Thompson's Birthday at Beauty & Essex on March 10, 2018 in Los Angeles, California. (Photo by Jerritt Clark/Getty Images for Remy Martin )
✨ To the happiest of birthdays my love! How special is this thing called life that we share together?! I am so blessed to be creating beautiful monumental memories with such a wonderful man! I hope this year brings you all that you dream of! You will forever be my always! I love you baby! ✨
💗
“When a woman is loved correctly, she becomes ten times the woman she was before” Thank you my love ❤️
✨ Day 1 of 2018 ✨
❥The day I met you, my life changed. Thank you my love!❥
👑Game Of Thrones 👑 thank you for everything @styledbyhrush @andrewfitzsimons @bryanhearns @missjilljacobs !! Happy Halloween 👻 🎃🦇
❤️ My Love ❤️
My love 💙
My birthday was incredible! Dream like almost! It's actually hard to put into words how special I feel and it's mainly because of this man right here! Thank you baby for treating me like a Queen every single day! Thank you to all of my friends and family for helping surprise me and for being the best anyone could ask for!! (Tap for glam details)
❤️
💕 US 💕
Sweet Sunday 💋
The Fab Four
To the happiest of birthdays my love! To the first of many more together! May God continue to bless you in all of your days! And may we forever look at one another like this 💋
❥ իմ սեր ❥ Im ser ❥ All my Love ❥
Up Next

“[Kylie] doesn’t really want to talk about it,” the second source told Us, adding that Jenner, 21, is “focused on [daughter Stormi Webster] and her work.”

More from Us Magazine:
Rosie O. helped Sherri make more than Elisabeth Hasselbeck on 'The View'
Jon Voight gives an update on Angelina Jolie and Brad Pitt's children
Sharon Osbourne: Simon Cowell ‘fired’ me from ‘X Factor’ for being ‘old’