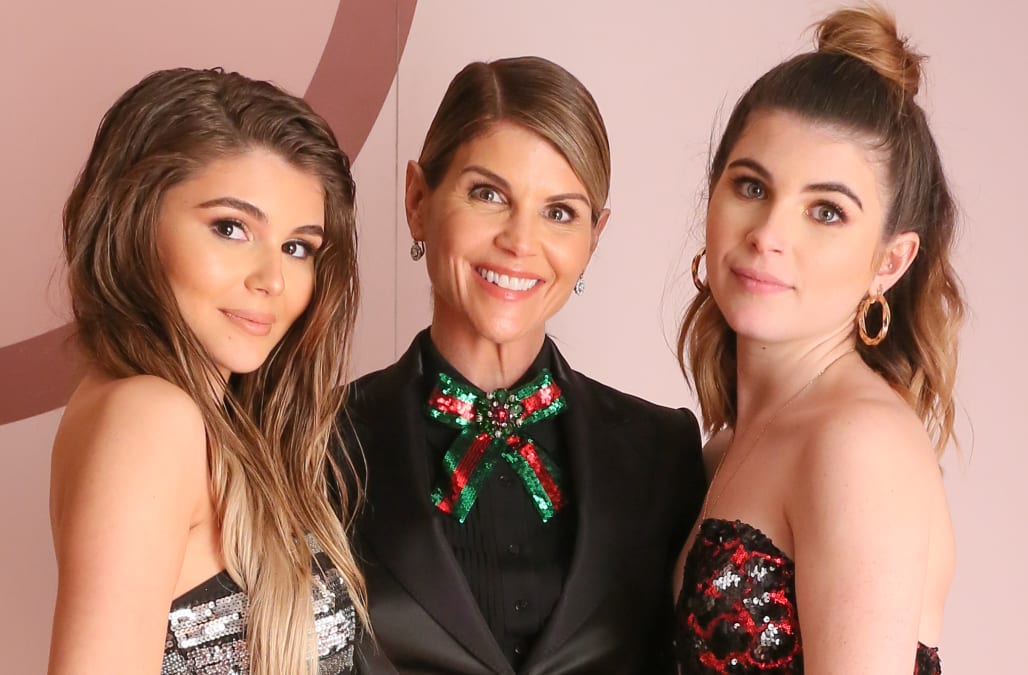 As the family continues to deal with the fallout over allegations that they were involved in the bribery scheme, younger daughter Olivia Jade is reportedly at odds with her parents and "blames her mom and dad for this scandal and for the downfall of her career."

Sources close to the YouTube star told Us Weekly that she "was initially trying to shrug off the scandal as something that would pass after a week and she could go back to her life," but, as the story continues to make daily headlines around the world, that's proven not to be possible.

Since the controversy erupted early last week, Olivia has lost deals with Sephora, TRESemmé and Princess Polly, which leaves her career as an influencer up in the air, despite her two million YouTube followers.

Olivia Jade on Instagram
love these people 💓 birthday vlog went up on Tuesday 🤗 www.youtube.com/oliviajadebeauty
another unforgettable evening 💗@wcrfcure
didn’t even plan our matching shoes @loriloughlin ❤️
back home from an amazing #TRESnyfw w @tresemme! brought my fave products home with me (including micro mist level 2)❤️ #trespartner
sooo happy to be a #trespartner at NY fashion week!❣️ @tresemme #TRESnyfw
🤗😒
the olivia jade x sephora collection palette is officially being RESTOCKED tomorrow (1/18) at 12pm EST!!! sooo excited for you to get your hands on these highlighters if you missed it the first time around… they are unreal. link in my bio to purchase #ad #sephoracollection
OLIVIA JADE X SEPHORA COLLECTION. A dream I never thought would be my reality. This is so surreal for me and my 14 year old self 😭😭❤️❤️ A huge thank you to #SephoraCollection for believing in me and allowing me to create a beautiful highlight palette. And to all my followers… thank you doesn’t even do it justice for how grateful I am. I love you forever. ❤️Olivia Jade @sc #BeautyUncomplicated #ad
i wanted to do a giveaway... sooooo now i am! if you want to win the WHOLE Olivia Jade x Princess Polly collection... follow me and @princesspollyboutique and tag a friend! winner will be chosen in one week ❤️
🚓
let’s get this bread? lol happy tanksssgivin kids
🌷
Had so much fun at #SEPHORiA a few weeks ago! Go watch my latest video with #SephoraCollection 🖤 link in bio #BeautyUncomplicated #ad @SC
idk just restart your phone or something
👀
new video is up! gave my wardrobe a fall update thanks to @amazonfashion! #ad #founditonamazon
happy
lit
thank you @theladybaglv for the vintage Chanel 💘
🖤
Officially a college student! It’s been a few weeks since I moved into my dorm and I absolutely love it. I got everything I needed from Amazon with @primestudent and had it all shipped to me in just two-days. #ad #primestudent #allonamazon
we went to Fiji last week... just incase you didn’t know
and that’s a wrap 🦋
I like you Fiji, I like you a lot.
and that’s a wrap 🦋
love this outfit from @lulus ❤️ click the link in my bio to see the full video x #ad #lovelulus
💙
Sunday 🤤
😎
on way @dolcegabbana 🦋
HAPPY MOTHER’S DAY to this beautiful woman that I am so lucky to call mom. You deserve to be celebrated everyday for your unconditional love & selfless outlook in this crazy world. I am so grateful we got paired up in this lifetime. Thank you for everything you have taught me & for always believing in me. Forever my #1. 🔐 @loriloughlin I love you the MOST! ✨🦋❤️
tbt ☃️
Just uploaded my new video w/ #sephoracollection @sc ! (http://bit.ly/2HbX9lo) Make sure to check it out... especially if you want some details on this lip color💄🤗 #ad #beautyuncomplicated
These pants are everything for festival season @windsorstore 😍 Check out my new video for last minute festival fashion inspo! #ad
we DID that @leerittiner ✂️✂️✂️
😴
In my newest vlog, I travel to SF with @sc and show you how to get this look using brand NEW products from #sephoracollection ✨ check it out on my channel #beautyuncomplicated #ad link in bio 😊
Happy Saturday & St. Patrick’s Day! 🍀✨🌞❤️ // @bryant
Last day in this beautiful city 🍎! Happy Valentine’s Day 💕
🦁
girly vibes 🌷
Up Next

"Now that her endorsement deals have fallen through she is very upset with her parents," the insider told Us. "Olivia didn’t even show interest in going to college, she wanted to take time and work on her beauty career, but her parents were the ones who wanted her to get an education."

In addition to the professional setbacks, the star and her older sister, Isabella Rose, have also officially withdrawn from the University of Southern California, per TMZ. The outlet reports that they've formally dropped out of the elite university, but could be banned from the school's grounds following an upcoming misconduct hearing, which has dubbed them "disruptive individuals." Both women are invited to attend the hearing, but will likely opt not to appear.

That being said, judging by some of Olivia's resurfaced comments from past YouTube videos in which she discusses going to college, she never truly wanted to be a student at USC, anyway.

"I don’t know how much of school I’m gonna attend, but I’m gonna go in and talk to my deans and everyone, and hope that I can try and balance it all," she said in August 2018. "But I do want the experience of like game days, partying … I don’t really care about school, as you guys all know."

She later apologized for the "insensitive" comments, which she said right before her six-month stint as a college student.

Nobody who is alleged to be directly involved in the scandal has publicly commented on it.

More from Aol.com:
R. Kelly defense emerges, including saying accusers are lying
Why Lori Loughlin, Felicity Huffman’s court dates have been pushed back
Felicity Huffman's arrest was 'the last thing she ever imagined' could happen: report