Baby No. 4? Bristol Palin reveals whether she wants another child 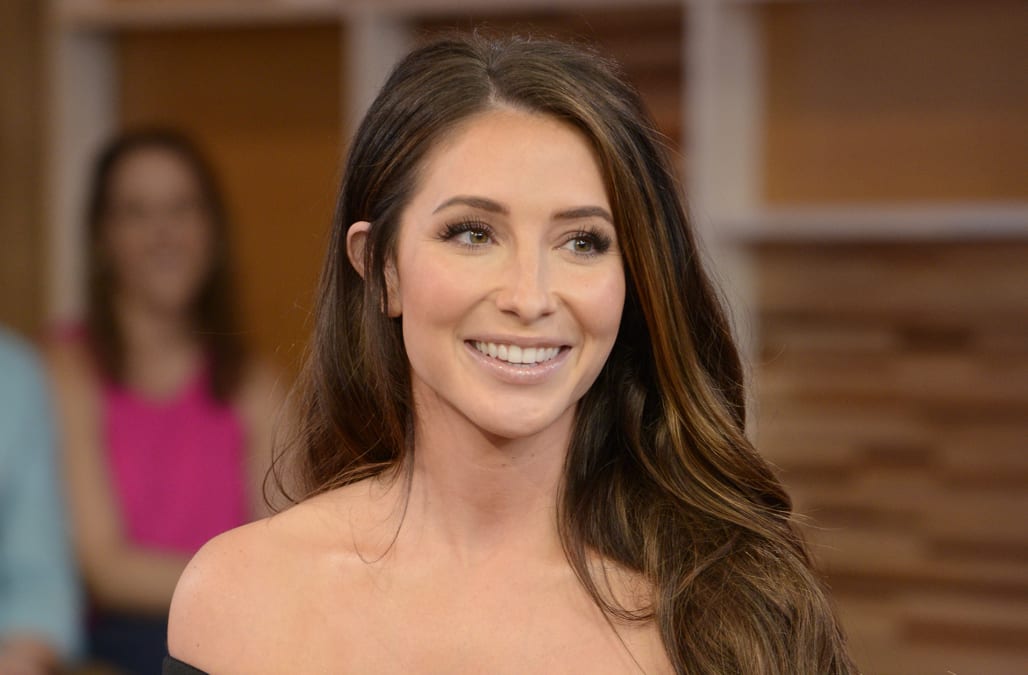 Ready for more? Nearly two years after welcoming her third child, Bristol Palin shared her thoughts on baby No. 4.

“Maxxxxxed out with BD’s,” the Teen Mom OG star, 28, wrote to a fan on her Instagram Story on Wednesday, March 20, after being asked if she wanted to expand her brood.

BD is a phrase commonly referred to pregnancy forums to signify “Baby Dance,” a.k.a. having sex at your most fertile in the hopes of conceiving. 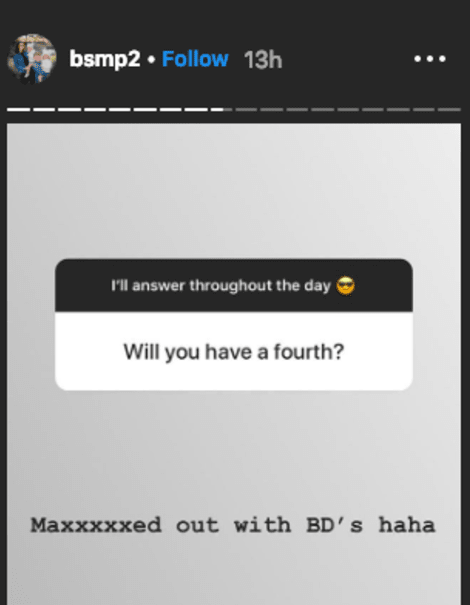 After denying plans for a fourth child, the Wife Swap alum shared details on her last three births.

“Tripp was literal death,” she wrote on her Instagram Story. “My girls were scheduled inductions w/ epidural. If there’s an easy way, I’ll find it! #noshame.” The Not Afraid of Life author added that all of her little ones arrived at “about 7 pounds.”

The Dancing With the Stars alum first welcomed her son, Tripp, with her now-ex-fiancé, Levi Johnston, in 2008 when she was 17. Six months before she married Dakota Meyer in June 2016, Palin and the former Marine welcomed a baby girl, Sailor. Their second daughter, Atlee, was born in May 2017.

The MTV personality and Meyer split in February 2018 and finalized their divorce six months later. “Freshly divorced & single forever lezzbereal,” she wrote on Instagram at the time. “(I am not ready to date).”

She opened up about this further in October 2018, telling Us Weekly exclusively, “[Dating] is a scary thing. I’ve got my hands full, and it’s kind of daunting. It’s not even on my mind right now. … I think it would be hard for someone to grab my attention, that’s for sure.”

The realtor added: “I’m nervous about it … There’s no like rule book on dating after a divorce. It’s just weird concept. I haven’t dated in so long, I’m like an old woman with so many kids. It’s a scary weird thing to try to date with kids and then be in the spotlight.”

Bristol Palin through the years
Bristol Palin, daughter of Republican vice presidential candidate Sarah Palin stands with her fiance and father of her unborn child, Levi Johnston on the stage on the third day of the Republican National Convention in St. Paul, Minnesota. (Photo by Ramin Talaie/Corbis via Getty Images)
UNITED STATES - SEPTEMBER 03: Bristol Palin, daughter of Sarah Palin, governor of Alaska and running mate of Senator John McCain of Arizona, Republican presidential candidate, attends day three of the Republican National Convention (RNC) at the Xcel Energy Center in St. Paul, Minnesota, U.S., on Wednesday, Sept. 3, 2008. The RNC will run until Sept. 4. (Photo by Joshua Roberts/Bloomberg via Getty Images)
The daughter of Republican vice presidential candidate Sarah Palin, Bristol, who is pregnant, and the father-to-be, Levi Johnston, attend the Republican National Convention in St. Paul, Minnesota, Wednesday, September 3, 2008. (Photo by Chuck Kennedy/MCT/MCT via Getty Images)
NEW YORK - MAY 06: Bristol Palin attends the Candie?s Foundation town hall meeting on teen pregnancy prevention at TheTimesCenter on May 6, 2009 in New York City. (Photo by Bryan Bedder/Getty Images)
Bristol Palin and Mark Ballas are seen on the Streets of Manhattan on November 24, 2010 in New York City. (Photo by Marcel Thomas/FilmMagic)
NEW YORK - NOVEMBER 24: 'Dancing with the Stars' contestant Bristol Palin from Season 11 of the 'Dancing with the Stars' competition visits 'Good Morning America' at ABC Studios on November 24, 2010 in New York City. (Photo by Jemal Countess/Getty Images)
DANCING WITH THE STARS - 'Episode 1110' - In an effort to show their improvement over the course of the season, all three couples danced for redemption by re-choreographing and doing a previously performed dance chosen by the judges with new music for a better score. Each couple also performed the unpredictable and always entertaining no rules Freestyle dance, MONDAY, NOVEMBER 22 (8:00-9:00 p.m., ET), on the ABC Television Network. (Photo by Adam Larkey/ABC via Getty Images) BRISTOL PALIN, MARK BALLAS
HOLLYWOOD, CA - NOVEMBER 1: Bristol Palin arrives at the 'Dancing With The Stars' - 200th Episode Party at Boulevard 3 on November 1, 2010 in Hollywood, California. (Photo by Gregg DeGuire/FilmMagic)
LOS ANGELES, CA - OCTOBER 28: Bristol Palin poses on the set of 'Extra' at the Grove on October 28, 2010 in Los Angeles, California. (Photo by Michael Caulfield/Getty Images for Extra)
BURBANK, CA - JULY 14: Writer/reality show personality Bristol Palin appears on The Tonight Show with Jay Leno at the NBC Studios on July 14, 2011 in Burbank, California. (Photo by Kevin Winter/Tonight Show/Getty Images for The Tonight Show)
Caption: PHOENIX, AZ - July 09: Bristol Palin signs copies of her book 'Not Afraid Of Life: My Journey So Far' at Barnes & Noble in Phoenix, Arizona Saturday July 9, 2011. (Photo by Laura Segall/ Getty Images)
HOLLYWOOD, CA - OCTOBER 02: Bristol Palin arrives for Ubisoft Presents The Launch Of Just Dance 4 at Lexington Social House on October 2, 2012 in Hollywood, California. (Photo by Gabriel Olsen/FilmMagic)
NEW YORK, NY - SEPTEMBER 18: (EXCLUSIVE COVERAGE) Bristol Palin visits the SiriusXM studios on September 18, 2018 in New York City. (Photo by Astrid Stawiarz/Getty Images)
GOOD MORNING AMERICA - Bristol Palin is a guest on 'Good Morning America,' Tuesday September 18, 2018 on ABC. (Photo by Lorenzo Bevilaqua/ABC via Getty Images) BRISTOL PALIN
Up Next