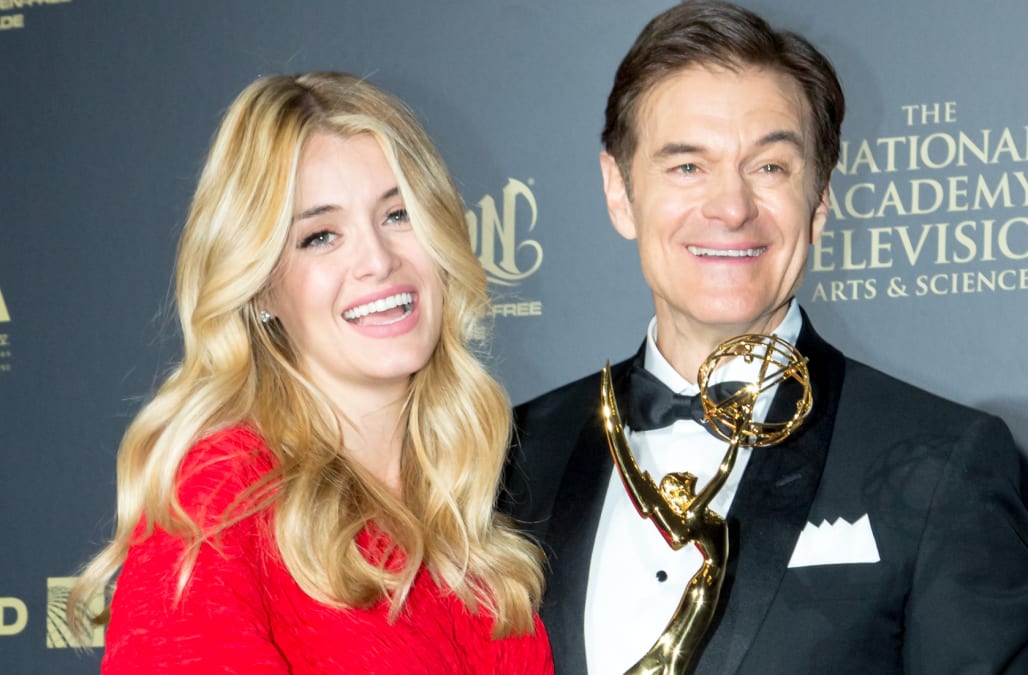 Daphne Oz is pregnant with baby No. 4

The 33-year-old former TheChew co-host announced the big news on Instagram on Tuesday. Oz cradled her baby bump in the sweet photo, and said she was due later this year.

I do love to cook! bun in the oven #4 coming your way later this year and we couldn’t be more excited!! ❤️❤️❤️❤️

Oz often shares adorable family photos on social media, including one last month of her and her husband and their kids celebrating her 33rd birthday on the beach.

turning 33 yesterday with cake by the ocean (extra sandy!) and these sweet faces!!! thank you for all the birthday wishes!!! 💋🎂🌊

And clearly, she and Jovanovic still know how to keep the romance alive.

Last January, Oz kept it real about her post-baby bod after giving birth to Domenica.

"Seven weeks post partum, still looking three months pregnant," she captioned an Instagram selfie,  in which she was wearing a black bra and black lace underwear. "There is no bounce-back, it’s all onwards and upwards."

"Every day has moments of total splendor and also a decent number of WTFs," she continued. "I especially want the new mamas out there to hear that, because we see so much of how glossy motherhood can be and not enough of how real 3D life is always complicated (and better for it)."

20 PHOTOS
What You Don't Know About Daphne Oz
See Gallery

What You Don't Know About Daphne Oz

Read on to learn more about Daphne Oz. Find out how she got interested in nutrition, how she ended up on ABC's The Chew and what on-air announcement surprised her colleagues on the show.

Daphne wrote the successful Dorm Room Diet when she was still in college. "I was looking to lose that weight myself," shares Daphne. "When I figured out how to successfully lose 30 pounds in a way that didn't deprive myself of all the amazing experiences college had to offer, I really felt compelled to share it with my peers. I knew I couldn't be the only college kid out there who felt like this was the time to harness my health."

How Daphne Got Involved With The Chew

"I was touring the country, speaking at college campuses about the power we have individually to harness our health without sacrificing fun (or flavor!), or making it a huge hassle. I'd graduated from the Institute for Integrative Nutrition, and went on to receive my culinary degree from the Natural Gourmet Institute. Food is the "medicine" we treat ourselves with daily, and I knew that figuring out how to make delicious meals that are also super nutritious and ideally pretty easy to prepare was going to be the best way for me to make healthy living a priority without driving myself crazy."

"The more I learned and put into practice in my own life, the more I was able to share about what really worked. So when The Chew was casting, they reached out to me as someone who could speak to health in a way that was totally accessible for people who just wanted to live real life and make the best choices possible, and really enjoy the process."

"I was home for three days before my husband and I went on our honeymoon and I got a call from Gordon Elliot, our executive producer. I went into an open casting call with about 200 different culinary personalities," remembers Daphne. After three rounds of auditions with different casts over eight months, she was finally connected with the current cast and the pilot was picked up by ABC.

"I probably lost 10 years of my life over this eight month process because every time you get the phone call, you think the show is going on without you or it's not happening, which is terrifying because you are so invested and it is such a cool show," she reveals. "I feel lucky every day to get to call this 'work' because it's just such a blast!"

The Close Cast Of The Chew

"Mario talks about it all the time: This is not the family I would have picked; we are an odd mix of people. You almost couldn't tell what the commonalities were going to be, if there were going to be any at all, but we all have such a love of food and we each come to it through such a different perspective. The beauty of having five different voices on the show with five perspectives and five techniques, is that we legitimize the viewer's sixth version of things. If you do something differently, chances are it is just as good, [but just] different," explains Daphne.

"We got on so well from day one," Daphne tell us. "We just celebrated our 500th episode, so it's cool because we got to look back at some of the moments we've had and see how those relationships have grown."

Favorite Moment On The Chew

"My favorite moment was my birth announcement on the show. My colleagues were so surprised and so genuinely happy for me and John. You can't fake that kind of love for each other. There is a still taken from the show where Mario had this look of shock and horror on his face. He was like, 'How did I not know about this already? We share everything.' I had only been able to keep it a surprise because we'd been on hiatus for five weeks during the bulk of my first trimester. I was away so I was able to keep it hush hush. So, when I came back and surprised him he was so shocked and thrilled," Daphne explains.

What She Admires About Mario Batali...

"Mario has this incredible ability to remember the historical details of a dish or the origin of where it came from and how these flavors came together. I found that really illuminating."

What She Admires About Michael Symon...

Daphne says, "Michael is so smart in the way he thinks about flavor pairings. He'll make a really fatty meat dish but then he'll pair it with a gorgeous, crisp citrus salad, or some kind of amazing [dish] that hits every taste bud in your mouth and makes a meal feel balanced as opposed to going totally overboard. I've been able to learn a huge amount from him."

What She Admires About Carla Hall...

"Carla is like my big sister. At 27, I don't necessarily know where my life [will] end up. Carla is able to share these incredibly strengthening and emboldening things about life with me, just little tidbits about how to respect yourself and how to feel confident about things. Her life has been so interesting. She has had like 15 different careers and because her life has been so crazy she has so much valuable wisdom to share. Woman to woman, I feel so bonded to her," Daphne explains.

What She Admires About Clinton Kelly...

"Clinton is fabulous. Culinary wise, I love the way that he cooks because it is easy comfort cooking. He wants food that is beautiful, sophisticated and easy. That is such a great way to think about food. The things that I've learned most from Clinton are that you are your best self when you are being yourself. Don't filter and don't try to apologize for things because you don't know how people will respond to them. Be exactly who you want to be and people will love you or not love you for it, but that's ok because then they are getting the real you," says Daphne.

Her Favorite Type Of Food

"My favorite food is Mediterranean. I eat a lot of Turkish, Greek and Persian food. It's funny because I don't think of it as a healthy restaurant type of thing, but when you think about it you are getting a big chopped shepherd's salad, you are getting some hummus and a shish kabob, so it really is a good and delicious way to eat out," Daphne tells us. "They have such a preference on quality ingredients, and the portions are so different; they are not going to bring you out a porterhouse steak-sized anything. It's just not how they eat."

"Why do I need orange zest in my chocolate?" asks Daphne, as one of her biggest culinary pet peeves is the combination of citrus and chocolate.

If Daphne Oz were to open a restaurant, it might be a healthy fast food spot in Tribeca or Midtown Manhattan. "I think healthy fast food that is flavorful and indulgent is missing in the marketplace," she shares.

"Everyone should have their 8-10 inch skillet on hand," says Daphne.

"I have my Le Creuset cast iron dutch oven. It is the best kitchen tool you'll ever buy yourself as a new cook because you can do everything in it: You can braise, sear, stir fry, make a soup, bake." says Daphne.

"I love a quick blender," Daphne says. "I use a Ninja. You can make smoothies in it, make a soup puree or chop vegetables."

More from ET Online:
Hoda Kotb opens up about possible plans to expand her family in the future (Exclusive)
Meryl Streep is a first-time grandmother after daughter Mamie Gummer gives birth
Miranda Lambert and new husband Brendan McLoughlin are ready for kids