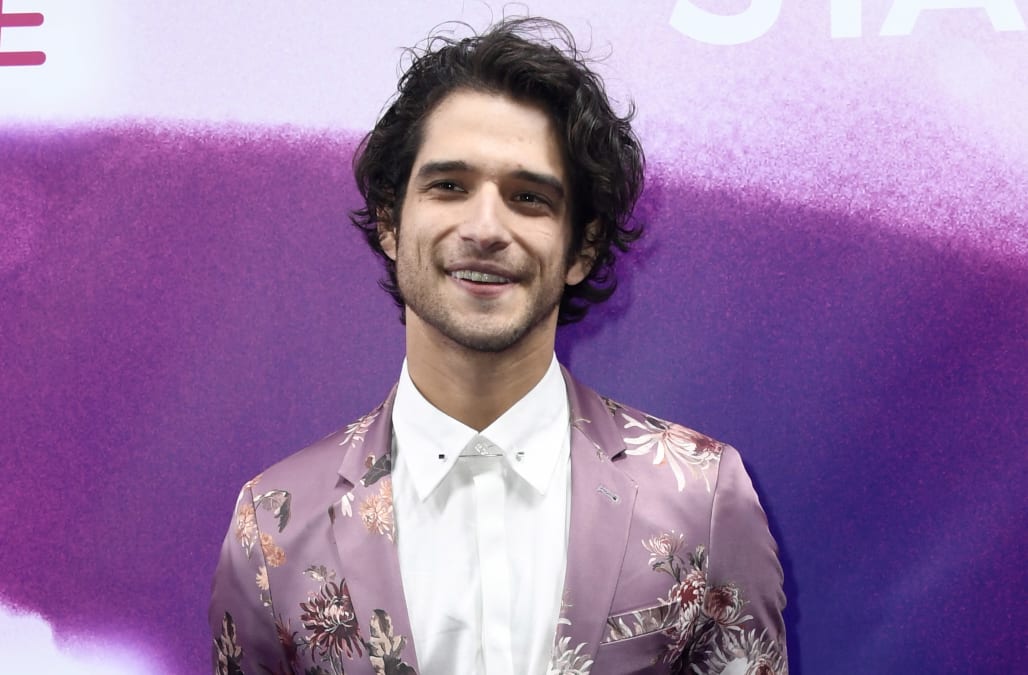 "Now Apocalypse" is a departure for Tyler Posey, who shot to fame on MTV's long-running "Teen Wolf."

In Gregg Araki's racy new Starz series, the actor, 27, plays Gabriel, a mysterious and elusive love interest for the show's lead, Ulysses (Avan Jogia), making it the first gay tole that Posey has taken on in his career. The actor, who identifies as straight, simultaneously recognized the significance of his character's sexual orientation and didn't want to make a big deal out it.

Another thing that Posey said he didn't think twice about: the show's gratuitous nudity. Nearly every character is either semi- of fully-nude in the first two episodes of "Now Apocalypse," which centers around a group of struggling actors and writers in Los Angeles, and it was something that the actor was "all in" for.

"I had a conversation with my reps before and they were like, 'Look, if you feel uncomfortable on set at all -- there’s a lot of nudity -- give us a call,'" he told AOL. "I was like, 'I think I’m going to be okay.'"

During an interview at Sundance Film Festival, where the show premiered, Tyler Posey chatter with AOL's Gibson Johns about taking on "Now Apocalypse" after "Teen Wolf," working with Gregg Araki, sexual fluidity and more.

Check out the conversation below:

14 PHOTOS
Tyler Posey out and about
See Gallery

Your character in "Now Apocalypse," Gabriel, is only in scenes with Avan Jogia's character, Ulysses. What was it like essentially only filming with one other person, despite the show having an ensemble cast? Did it feel a bit like a bubble?

A little bit, but not so much. Anytime you film something, unless you lead and are in every scene, you’re going to miss out on certain scenes, so you’re always kind of surprised when you watch the final product. I didn’t feel too left out, but everyone was super nice and always on set. and I totally felt like a part of it, even though my character wasn’t huge this first season. Gregg was the f--king greatest, and the crew was awesome.

This show has a very unique concept and tone. What about the project attracted you?

I did "Teen Wolf" for, like, seven years, so I was like, "I’m going to get a little picky with what I do and do something different." I wasn’t searching for this -- it kind of just fell in my lap -- and I loved the f--king character. I love Gabriel. I loved the whole concept of the show and how relatable it was to me and everyone my age. There are a lot of interesting topics in the show, especially the sexual fluidity. Like, "Go have fun and be safe."

I loved Gregg and his work. I had really only seen, “Smiley Face,” because I’m a pot head who grew up in suburbia and skateboarded. [Laughs] I love that movie, so I knew his name. We were buddies, and we had a good rapport. The character is really what drew me to it, though. I had never done a gay role, at least not as intense as this. I played somebody bi on "Jane the Virgin." I was definitely a little nervous when I thought about it, but gay or straight ... that kind of stuff is nerve-racking and being naked on screen while doing vulnerable stuff. I met with Gregg, heard his idea and was super stoked about it all.

You mentioned that Gabriel is the first gay character you've ever played on screen. I'm curious what you think of the idea that only gay actors should play gay characters, which is something that often gets brought up around high-profile films and shows with gay leads. Is that something you thought about at all before taking this role?

I think everything should be talked about, but I never thought about that because, to me, acting has always been in the purest sense about acting. It never crossed my mind. Does that mean that gay people are only limited to play gay roles and can’t play straight roles? It puts lines and barriers around what we’re trying to portray on the show of being fluid and open and everyone being accepted. I was excited to play a gay character, because I’m really comfortable with my sexuality, and I think it’s cool that somebody could see me on the show and say, "Hey, that kid is really comfortable with his sexuality, and he’s going all for it and that can inspire me to love myself." I don’t know. I think there are a lot of cool things about it, but I never saw it that way, because I’ve been acting since I was a kid and I think I always just saw acting for what it is. I get that it’s a conversation that needs to be brought up, and I think that everything should be talked about. F--k it -- bring it up!

There's a lot of nudity on "Now Apocalypse." What were your feelings on that going into shooting?

I was totally with it and didn’t have a second guess about it. As soon as I committed to the project, I was all in: I’m shoving my tongue down some dude’s throat, and I don’t know how much else I can say, but we jerked off in the alley in the first episode. Bring it on. Honestly, I had a conversation with my reps before and they were like, "Look, if you feel uncomfortable on set at all -- there’s a lot of nudity -- give us a call," and I was like, "I think I’m going to be okay." Our set was the most relaxing, easygoing … I didn’t care at all. It was the greatest and it eased any sort of worry or stress. We were having fun and telling stories.

What was it like working with Gregg? Were you able to take any liberties with your character?

He was super collaborative, man. He gave me a specific idea and the writing is fantastic, so it’s basically all on the paper. He was like, "I want this guy to be really sweet, genuine and vulnerable, and I want them to fall in love and have it be real. I want [Gabriel and Ulysses] to show deep, intense love for one another. But also to be aloof and a bit of an enigma: You aren’t sure what, who or where he is." I was like, "Okay, that totally makes sense and I connect with that, because I’m a bit of an enigma." I would get on set and Gregg seemed to like my choices. He was specific about his vision, and I saw it right away.

The core of this story is really just about struggling actors and writers in L.A. trying to make it. In what ways do you relate to that theme?

I have a lot of friends that are in that boat, but I’ve been fortunate enough to constantly be working. Even if I’m not acting, I have a lot of other hobbies and keep myself busy. I have a lot of friends that are going through that kind of thing. L.A. itself is kind of its character in its own in this story, and I relate to that. It’s just so psychedelic: L.A. feels like a giant trip and everyone’s on drugs, hazily floating around not really sure what we’re doing and having sex with everybody and crying a lot while being very creative. [Laughs] It’s an interesting town. I found a lot of things that I recognize in it.

You were on "Teen Wolf" for seven years, as you said, which allowed you to cultivate a massive, intense fan base. How does it feel to have constant support from them, assuming they'll follow you to this show? Is there a pressure that comes along with those many people watching your every move?

I think it’s really cool, and I’m super grateful for it. I relate to it, too: When I was a kid, I was a fan of a bunch of things and to this day I still support them, whether it’s my favorite band Blink-182 -- I love those guys. I totally get it, and I think it’s totally fun and sweet. I’ve never really thought about it too much, maybe because it’s always there so I don’t have to. I love them. There’s a dichotomy, because I’ve gone back and forth between how I view social media and how I want to use it: I like to take breaks and play it cool, but I also want the fans and everyone that supports me to know that I really appreciate it and give back to them somehow, and the only way I know how to do that is by being real. Like, "You guys f--king rock, thanks for supporting me." I think it’s great and what’s cool about it is that most of the fans of "Teen Wolf" might not otherwise be introduced something like "Now Apocalypse." These are the ages of people who should be watching this show and hearing about these important topics.

"Now Apocalypse" airs on Starz on Sundays at 9 p.m. EST