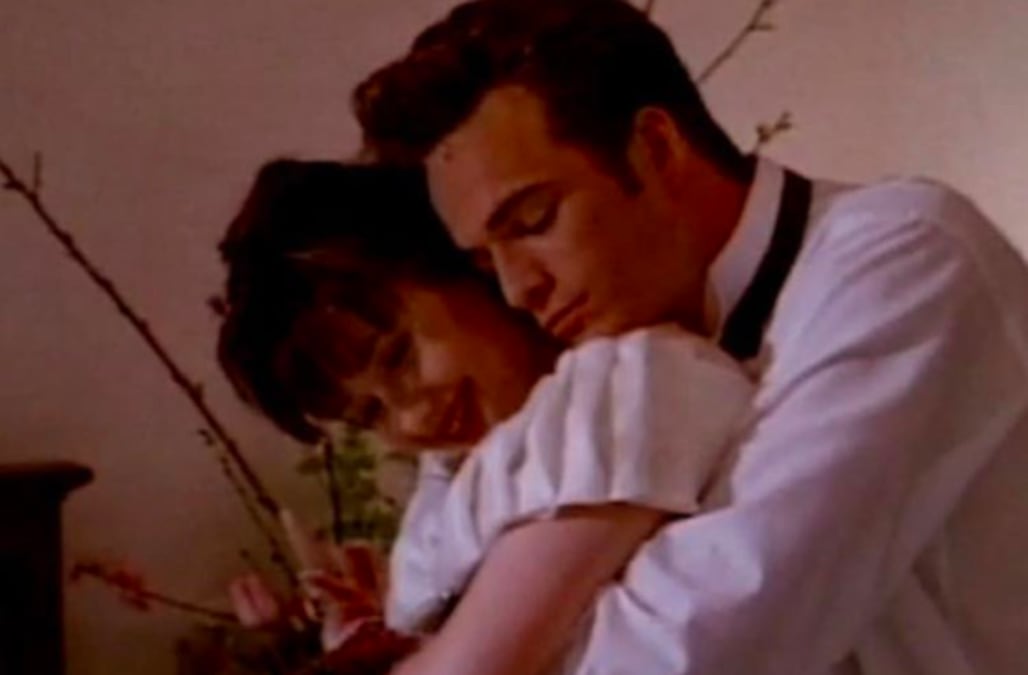 On Monday, fans were devastated over the news that beloved actor Luke Perry died after suffering a stroke at his home in Sherman Oaks, California, on Feb. 27. Perry was 52 years old.

Perry is, of course, best known for his role on the iconic '90s series, Beverly Hills, 90210, before being introduced to another generation in later years through his role on another highly rated teen series, Riverdale. But for those who went through adolescence in the '90s, Perry's portrayal of bad boy Dylan McKay is unforgettable, as well as his relationship with his first love interest on the show, Brenda Walsh, played by Shannen Doherty.

Perry and Doherty's characters dated in season one and quickly became a favorite couple on the series, thanks to their natural chemistry. Dylan and Brenda's opposites attract-type relationship was adorable from the start, the two flirting with one another -- who can forget when Brenda dyed her hair blonde because she thought that's what Dylan preferred, though it went horribly wrong -- before eventually becoming a couple.

Their relationship later became intense, with Brenda helping Dylan through alcohol abuse issues, and the two breaking up after she experiences a pregnancy scare. Their union also took on a romantic Romeo & Juliet vibe, when Brenda's parents disapproved of Dylan.

Through a lot of dramatic makeups and breakups -- and a famous love triangle between Dylan, Brenda and Brenda's close friend, Kelly Taylor (Jennie Garth) -- Dylan and Brenda didn't actually end up together, and Doherty left the show prematurely in 1994. Dylan actually ended up with Kelly when the series went off the air in 2000 after 10 seasons.

Doherty being written off Beverly Hills, 90210 was a huge scandal at the time, and followed reports of the actress not getting along with the cast and even getting into a reported fistfight with Garth. Still, Doherty has said she does not regret her departure from the show.

"It let me find a little bit of peace and discover who I was as a person," she later told Entertainment Weekly. "Not the person who the press made me out to be because I'd had a few bad experiences in my personal life, and I was struggling to figure out a bad husband or a bad boyfriend and I was doing it under the spotlight, so I wasn't reacting well to any of it."

Clearly, the cast has been able to get over their issues in the decades that followed, particularly, Perry and Doherty. Interestingly enough, the two both experienced major health issues around the same time in 2015. Perry told Fox News that doctors found precancerous growths in his colon after he underwent a routine colonoscopy in 2015, and that same year, Doherty was diagnosed with breast cancer.

In November 2016, Perry went on the record saying his favorite couple on the series was actually Brenda and Dylan, when he made an appearance at REWindCon in Bloomingdale, Illinois, alongside Garth as well as their fellow 90210 co-stars Jason Priestley and Tori Spelling. Perry also acknowledged Doherty's contribution to the series and let her know he was thinking about her as she underwent breast cancer treatments.

“None of us are up here today without Shannen,” Perry said. “She’s been through a lot. She’s not doing well right now, but sometimes her contributions are minimized.”

“She’s been thrown under the bus,” he continued. “I’ve been accused of driving it. But she’s a very big part of the success of this show. She taught me a lot. I’m glad she was my scene partner. She was great at what she did in the character with me.”

In March 2017, Perry said he admired the way Doherty was handling her battle with breast cancer.

"She’s brave, she’s a fighter," he told Us Weekly. "She’s in my heart and I think about it. Shannen has taken the opportunity to raise the awareness and let everybody know breast cancer is still a problem. I’ll take this opportunity to send her my love.”

Further showing the love that still existed between the two, in March 2017, Doherty shared a throwback pic of their characters together.

#tbt they were so happy here!!! Anyone remember this episode? #brendaanddylan #90210

Last October, she Instagrammed another priceless pic of the two together on 90210.

I don’t Even know what day it is right now due to jet lag but here’s a throwback anyway. Thanks @the9021bro for this gem. #brendaanddylan

When news of Perry's stroke hit last Thursday, 47-year-old Doherty shared a moving throwback photo of them together along with a message of support.

"My friend," she wrote. "Holding you tight and giving you my strength. You got this."

My friend. Holding you tight and giving you my strength. You got this.

On Sunday night, ET spoke to Doherty at The Animal Hope and Wellness Foundation's Compassion Project Gala in Los Angeles, where she got emotional talking about her former co-star. She also said she had been in touch with him.

"I can't talk about it here 'cause I will literally start crying but I love him and he knows I love him," she told ET. "It's Luke, and he's my Dylan."

Sadly, Perry's rep confirmed to ET on Monday that the actor died after having never recovered from the massive stroke.

"He was surrounded by his children Jack and Sophie, fiancée Wendy Madison Bauer, ex-wife Minnie Sharp, mother Ann Bennett, step-father Steve Bennett, brother Tom Perry, sister Amy Coder, and other close family and friends," the statement reads. "The family appreciates the outpouring of support and prayers that have been extended to Luke from around the world, and respectfully request privacy in this time of great mourning."