Becky G on finding herself again through Spanish music: 'I lost my identity in my English music' (Exclusive) 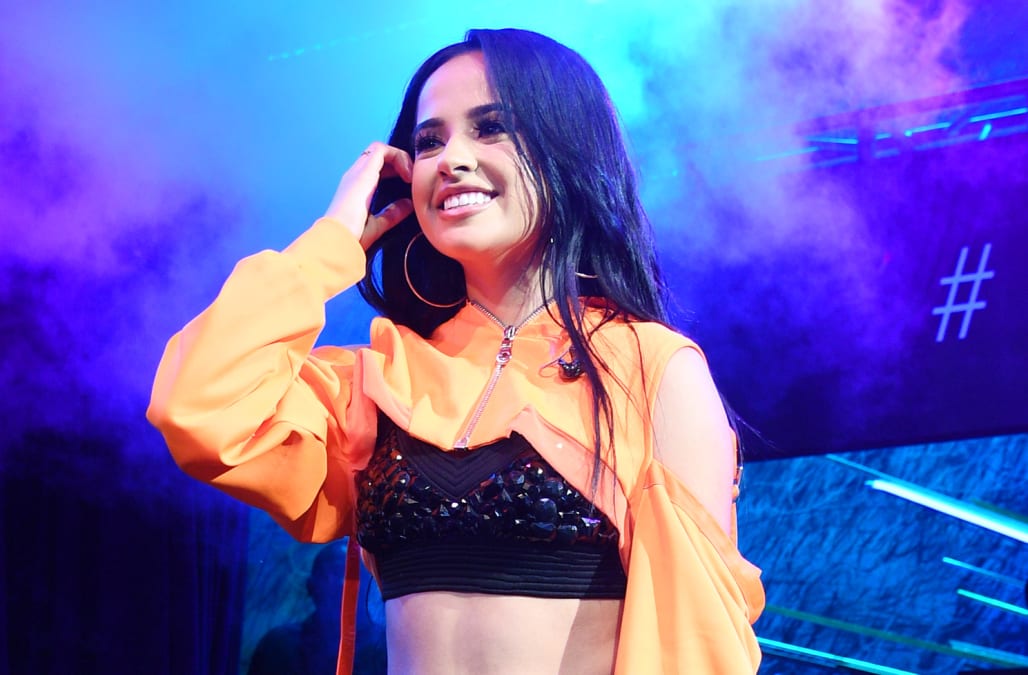 Becky G is ready to try her hand at English pop music again.

The singer, who burst onto the pop music scene back in 2014 with her inescapable hit, "Shower," has been dominating the latin music space for the past couple of years, garnering international success with songs like "Mayores" and "Sin Pijama."

Though recording music in Spanish was one of her "biggest fears," Becky G told AOL that the career pivot helped her find herself again, which is allowing her to record material in English that feels more like her own.

"To be completely honest, I feel like I lost my identity in my English music for many reasons," the singer told us backstage at the Sony Lost in Music finale. "Don’t get me wrong, I learned a lot of really valuable lessons at such a young age from songs like 'Shower,' for instance, but those are songs that anybody could’ve sang."

Check out our conversation with Becky G from her Sony Lost in Music performance below, where she gave AOL's Gibson Johns more context into her career decisions over the past five years, why she has yet to perform new English single, "LBD," and finding the strength to make decisions for herself, regardless of what everyone around her thinks:

You recently dropped "LBD," your first English single in years. Have you performed it yet?

I haven’t, actually. I want to wait for the music video to drop for that, so I can keep the people waiting. It’s kind of like an orange, you peel it piece by piece. It’s impossible to do it in one piece, so you keep people wanting more.

When you dropped the song, you said that it's a preview of what fans can expect from more of your English-language music that you'll be releasing. Can you tell us more about that?

Yeah, to be completely honest I feel like I lost my identity in my English music for many reasons: For reasons of not wanting to let people down, for reasons of peer pressure around what you think is hot right now or what you think you need to do to succeed. Don’t get me wrong, I learned a lot of really valuable lessons at such a young age from songs like "Shower," for instance, but those are songs that anybody could’ve sang. I remember the connection that I built with my fans with songs like “Becky From the Block” and “Otis,” and that was because I was my true, authentic self. People were like, “Yo, she’s from Inglewood! She’s Latina and she’s proud to be [Latina]!” And I kind of lost that in my English music and, when I took a dive into Spanish music, I found myself again. That was kind of crazy, because it was something that was a big fear of mine for many reasons. Like, the movie "Selena": You’re too Mexican for the Americans and too American for the Mexicans. It’s a lot.

14 PHOTOS
Becky G out and about
See Gallery

But it's a different era now, and latin music has never been more popular in America and around the world than it is right now. Do you feel that your pivot has paid off?

It's crazy timing and has paid off, but it’s also not me doing it to just ride a wave, and I like to make that really clear, because where we are with latin music is so inspiring to me. Obviously, I found myself in my Spanish music and the stars couldn’t have aligned in such a better way. When I started my Spanish project, it was before "Bailando" and "Despacito" happened, and I started to launch my project while these were lifting off. I was feeling the wave before it happened.

Obviously, my success in the latin space didn’t come until a little later, but it was still authentic and real to me. I was able to create this formula that was really true to who I am and now bring it over to the English side. At a time where I’m still young enough to get it right -- I’m only 21, which is so crazy -- but I feel like I’ve had such a long career, because I’ve been working since I was nine years old.

Totally. It took a lot of convincing to the people around me, too, because it was like, "You can’t be that and then want to go do that." I’m like, "Why can’t I?" Why are we so quick to put people in boxes? I say "people," because in general in life I see it happen outside of the music industry and, as artists, we are so entitled to that creative freedom. And, for me personally, it’s been suppressed for so long -- again, for many reasons; reasons that were out of control but also reasons that I simply felt the pressure to be perfect or a certain way because I was going to let people down, and it took away from my happiness as an artist.

Was there a specific moment where you let yourself embrace your identity in your music? Or was that a gradual realization?

I want to say it was gradual, but it was definitely a moment, which was going into Spanish music, because that was one of my biggest fears. It was like, "I’ve got to stop being so scared, and I’ve just got to do this, because at the end of the day, nobody can want it more than I do." I want to make something that means something to me.

More from Aol.com:
John Mayer gave Alicia Keys half his GRAMMY when he beat her in 2005
Ariana Grande responds after Cardi B says she's 'sharing this Grammy' with late nominee Mac Miller
The biggest snubs and surprises of the 2019 Grammy Awards