'The Cher Show': See how the Broadway musical celebrates Cher's most iconic looks 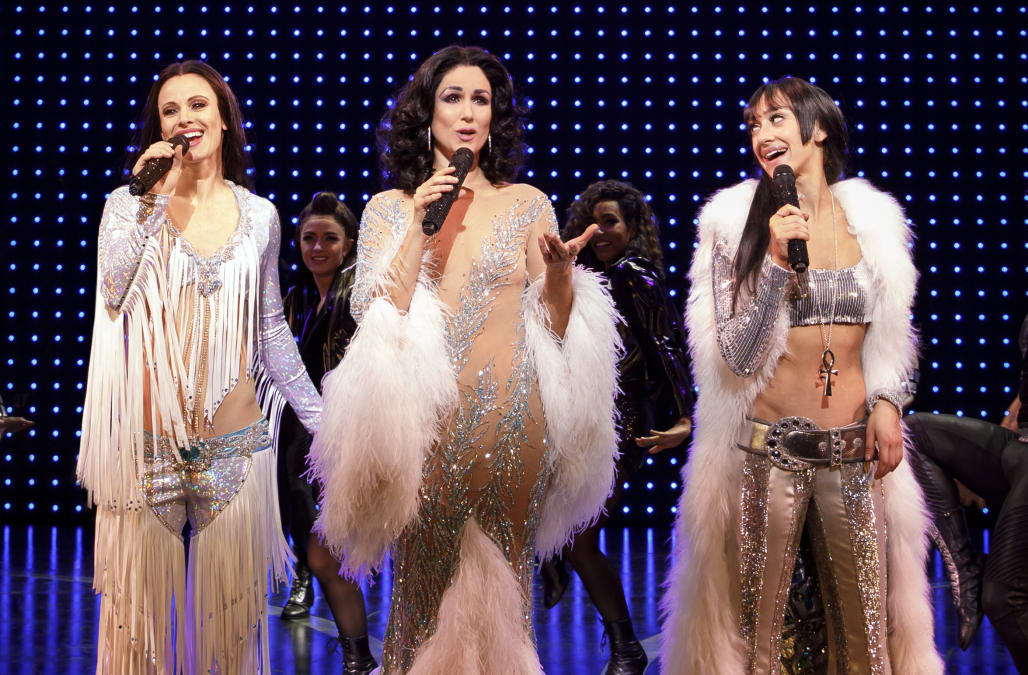 Cher is taking over Broadway!

One week after "The Cher Show" premiered on Broadway, the show that tells the story of the iconic singer's life using music from her legendary music catalogue has brought renewed attention and appreciation for Cher's impact on pop culture.

The musical, which stars Stephanie J. Block, Teal Wicks and Micaela Diamond as Cher at three different stages of her life, delivers an exhilarating show that celebrates a life well lived, with each actress nailing the singer's unique vocal delivery, mannerisms and energy.

But perhaps the true stars of the show are the larger-than-life, Bob Mackie-designed costumes. Cher is arguably known just as much for her music as she is for her affinity for jaw-dropping styles: From avant-garde and sparkly to sheer and barely-there, the epic outfits that Cher has worn throughout her career have cemented her as one of the most iconic fashionistas the music industry has ever seen.

See photos from "The Cher Show":

And "The Cher Show" more than celebrates her outfits. Towards the middle of the show, there's even musical number that puts the spotlight directly on Mackie's designs, as a dozen of the show's cast members parade around the stage in the most memorable looks that Cher has ever worn -- wigs included!

Though "The Cher Show" isn't perfect, it's an undeniably enjoyable musical that does the colorful life of Cher justice. Come for the music, but leave in awe because of the costumes.

Buy tickets to "The Cher Show" on Broadway here.

See Cher's most iconic looks below:

Cher's Style Transformation
Is that a Komondor draped on Cher's lap (see: dogs that look like a mop) or just a way over-the-top fur coat?
Sonny and Cher perform in all white on the "Carol Burnett Show."
Sonny wears a fur vest and matching boots, while Cher went for stripes from head-to-toe.
Cher's outfit is perfectly '60s, with a floral jumpsuit complete with bellbottoms.
Sonny and Cher pose for a portrait session at home, Cher dressed in firey red.
Cher wears brightly striped bellbottoms, for a portrait session in her home.
Cher is willing to bare her midriff in this matching crop top and pants.
Sonny and Cher in New York City, Cher wearing a casual tied button-up.
Cher attends the Grammy Awards with a large butterfly pin in her hair and bright purple eyeshadow.
Cher goes incognito as she and Chasity are out and about in New York City.
Cher looks like she ought to be at the Kentucky Derby with this oversized hat! But we applaud her for shielding her skin from the sun.
Cher wears an interesting headdress with this large fur coat.
Sheer and sparkling, Cher wears a beaded dress to the Academy Awards.
In a total departure from her usual style, Cher wears a miniskirt and sneakers and ... she's blonde.
Tame that mane! Cher dyes her hair purple, but if that isn't enough, spikes it up like a lion's mane.
Cher attends the Met's Costume Institute Gala Exhibition of "Costumes of Royal India," wearing a sheer top and way too much light makeup.
Never one to shy away from a crazy outfit, Cher attended the 58th Annual Academy Awards in this risque dress and matching headdress.
We typically throw a blazer on over an outfit to dress it up a bit, but we're not sure it works when you have distressed jeans with hearts on them.
Cher's dress for the 60th Annual Academy Awards is a wardrobe malfunction just waiting to happen!
Well, at least this look is for a Halloween party.  Cher attends Bob Mackie's party for the holiday, dressed as Cleopatra.
Cher attends the "Mermaids" Beverly Hills Premiere in a slightly see-through lace minidress.
Cher is a red vixen in this sparkling number for the filming of "The Player."
Cher wears a long fur coat over a black ensemble for the 1997 Golden Globes.
The lady is definitely proud of her body, wearing another sheer dress to the Academy Awards with an interesting matching hat.
There's a lot of different fabrics and prints going on here for Cher at the 26th Annual American Music Awards.
Cher channels her '60s style when she goes back to blonde for the "Love Rocks" concert to honor U2's Bono.
Blonde works for Cher, but we're not so sure these pants do.
Cher attended the 50th Annual Grammy Awards in a dress that honestly resembled a trash bag! What she or her stylist were thinking is beyond us.
This dress is much better.  Attending the Golden Globes, Cher still keeps it interesting but wears a sleek silhouette.
Cher attends the 38th AFI Life Achievement Award honoring Mike Nichols in an intricately designed top with a maxi skirt.
Cher attends the Glamour Magazine 2010 Women of the Year Gala, keeping the rocker in her at the forefront with this leather jacket and pin.
Cher looks lovely in this black and gold dress, keeping her favorite accent (sheer) as a part of it with lace sleeves.
It's official, Cher has tried just about every hair color! She chose a vibrant red for the premiere of "Burlesque."
Back to black and a much more casual look, Cher attends the premiere of "Zookeeper."
We're loving this classic look: all black with a great coat and simple sleek hair.
Cher chooses a lace top with black pants and a blazer for AFI's Night at the Movies.
Up Next