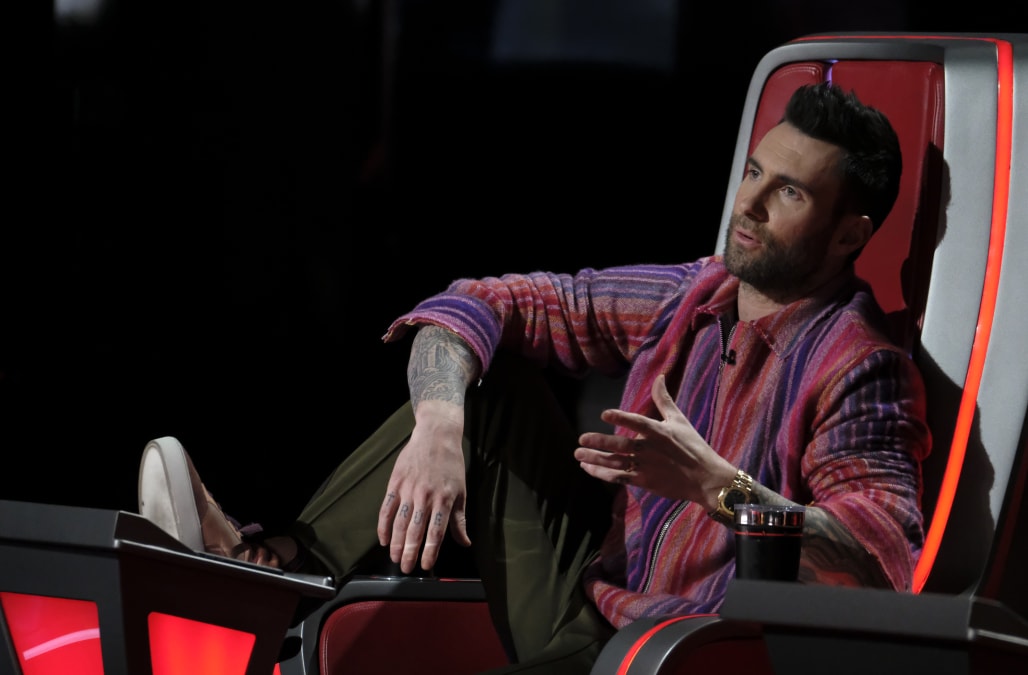 Adam Levine is facing some backlash for seemingly playing favorites on The Voice.

During Tuesday's episode of the singing competition show, the Maroon 5 frontman advocated for one of the contestants competing on his team to move into the semifinals over another.

It all started when host Carson Daly announced that Reagan Strange, 14, was in the bottom three, but was too sick to perform during the night's Instant Save sing-off.

"She's in the building, not feeling well at the moment, isn't joining us," Daly explained. "But is still here in spirit and part of the show, as for now. So we're thinking of her."

However, DeAndre Nico, 22, also from Levine's team, and Dave Fenley, 39, of Blake Shelton's team, still had to sing for their survival, as fans on Twitter voted for who they wanted to "instant save" by using a special hashtag for their favorite.

"Dave, DeAndre and Reagan remain at risk for elimination. And you can only save one of them," Daly told the audience. "Unfortunately, Reagan's still feeling under the weather, she's not going to be able to perform tonight. [BUt] you'll still be able to tweet to save Reagan ... so she won't perform, but she's not out of it by a long shot."

Although Nico crushed his rendition of John Legend's "All Of Me," Levine decided to stick up for his other contestant, Strange, despite the fact that she did not even perform.

"This sucks, man. DeAndre, you're an exquisite singer. I'm a little confused as to why you're in the bottom -- that perplexes me," Levine said. "But I want to say this... there is an unbelievably talented little girl right now who is not able to fight for her position on this show. And you were fortunate enough tonight to be able to sing. And man, you sang like a champ."

"I can't sing for Reagan. Reagan has to sing for Reagan, and she's not here," he continued. "As much as I urge you all to vote for this man, because he should never have been in the bottom -- I don’t know if I have the heart to not tell everyone right now."

After a pause, he added, "I have a very special relationship with Reagan. And I have two little girls at home. The thought of breaking her heart by not urging everyone to give this girl a shot to go and redeem herself next week would be too far beneath me."

"I want you to know I love you," he continued, speaking directly to Nico. "I appreciate what you've done here tonight, and honestly, I think you should both be there. But I gotta fight for my girl. And I gotta make sure that I represent her properly in this moment, because she didn't have a chance to use her voice tonight. So I'm going to use it for her as well as I possibly can to make sure she can make it next week. That's all I can say. It's weird."

"I know Adam and his heart, and I know he loves his team," she said. "He feels really bad for Reagan ... I just wanted to say I know it's so horrible that Reagan is not able to present herself . . . so please know that's where it's coming from, he's bummed for her. Everybody did a fantastic job tonight, a really great job."

At the end of the viewer-voted results show, it was announced that America had instantly saved Strange, which meant Fenley and Nico were both eliminated from the competition. Many fans on social media were not happy with the results, with some blaming Levine for what happened, and others asking NBC to "fix" it by bringing back Nico for a re-do.

See some of their reactions below:

Unbelievable how @adamlevine pushed DeAndre under the bus for Reagan. I’m no longer pulling for Adam anymore. That was really unacceptable. #VoiceSaveDeAndre

#thevoice That was bullshit. She isn't able to perform and Adam pushes Reagan up on a pedestal to be voted for. So unfair. The show is called The Voice. You should be able to save yourself by showing your VOICE.

I think the bottom THREE should have a re-do. Was not fair to the other two. Shame on Adam and The Voice for allowing this to happen. #TheVoice

@NBCTheVoice Absolutely THE most unprofessional moment I have ever witnessed from a coach. Shame on Adam Levine. Wow.

More from ET Online:
Kourtney Kardashian reveals the reason she cries herself to sleep 'every night' in 'KUWTK' clip
Busy Philipps says Kim Kardashian’s ecstasy experiences were very different from her own
'The Conners' drops a pregnancy bombshell -- Who's expecting?